In 2013, ten cases of acute hepatitis C were notified to the Statens Serum Institut (SSI), comprising eight men (age range: 25-51 years) and two women aged 37 and 44 years. Both women and two men were infected via intravenous drug use (IDU). The remaining six men were infected by homosexual contact and all six are known to be HIV-positive. Four of the infections by homosexual contact most likely occurred in Denmark and the other two in Germany.

Distribution by region, area and incidence of notification per 100,000 population are presented in Table 2. Data are presented for 2013 in comparison to the average incidence for 2009-2012. 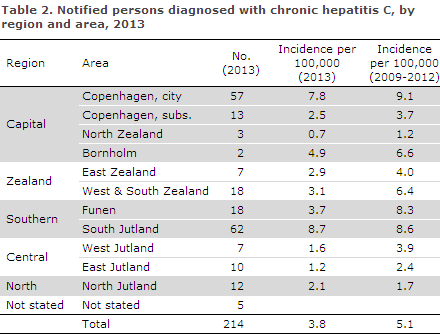 A total of 164 (77%) cases acquired their infection in Denmark and 50 (23%) cases were infected in 24 other countries. Of migrants who acquired their infection before entering Denmark, 15 (42%) were not notified until >5 years after arriving in Denmark; the timing of their diagnosis in relation to the time of notification is unknown. This group would benefit from being tested for HCV on arrival in Denmark, allowing for early hepatitis C treatment to reduce the risk of progression to severe liver disease.

Mode of infection is presented in Table 3.

Intravenous drug use was notified as the source of infection in 154 (72%) of reported cases. Among the cases acquired by IDU, 90% were acquired in Denmark.

Seven cases were reported as sexually transmitted, including two homosexual transmissions; both these cases were also known to be HIV positive.

Tattooing was identified as the most likely transmission route for four cases, two of which performed home tattoos with unsterile equipment. The other two received their tattoos outside of Denmark.

One person reported to have been infected by sharing a blood glucose meter with an IDU.

Hepatitis C rarely presents as an acute illness; it is generally diagnosed once the chronic stage has been reached. The notified cases of chronic hepatitis C are therefore mainly due to infection many years earlier, increasing the risk of late sequelae such as chronic liver injury.

Acute hepatitis C cases among HIV positive men who have sex with men (MSM) are reported increasingly frequently abroad. There seems to be an association with sexual practices involving damage to mucous membranes and therefore a risk of bleeding. In Denmark, HIV positive MSM are screened regularly for hepatitis C and every year, a number of cases are diagnosed in this risk group.

As systematic HCV screening of other potential risk groups – such as immigrants from highly endemic countries – is not performed, the share of diagnosed and notified persons for these groups is presumably underreported at present.

A study estimating the prevalence of chronic hepatitis C in Denmark concluded that approximately 17,000 people in Denmark are chronically infected, corresponding to 0.38% of the population over 15 years of age. It is estimated that 46% of these patients have not been diagnosed with their illness and are therefore not receiving adequate treatment, despite the fact that treatment options for hepatitis C are continually being improved.

It is therefore essential that persons with an increased ALAT level of unknown cause should be screened for hepatitis C and hepatitis C-infected patients be referred to a specialised department for further management of their illness.
(A. Wendland, S. Cowan, Department of Infectious Disease Epidemiology)

A 12-month-old child has tested positive for measles at Hvidovre Hospital. The child had not received MMR vaccination due to low age, and no known source of infection has been established, including stays abroad. During the course of the disease prior to the diagnosis, the child spent time in a waiting room with other children and adults at the GP, at the emergency medical services and when being admitted to hospital. The GP and Hvidovre Hospital in collaboration with the Public Health Medical Officers have ensured that patients who may have been exposed to infection have been informed of this.

Physicians in the Copenhagen area are currently encouraged to pay extra attention to the diagnosis in children and younger adults who present with measles symptoms. Because measles is extremely infectious, it is important that persons suspected of having measles avoid staying in waiting rooms with other patients.

The diagnosis may be verified through detection of IgM antibodies in the blood. Rapid diagnostics of the virus using PCR is performed on throat swabs and urine (in some cases blood) at the Department of Virology, Statens Serum Institut. Laboratory-confirmed measles infection is notifiable on Form 1515.

Vaccination against measles is covered by the MMR vaccine which is offered to all children via the childhood vaccination programme. The vaccine may also be given to adults who have not previously been vaccinated. Adults, however, are required to pay for the vaccine. In case of definite exposure of non-immune persons, MMR vaccination may be given within three days, or immunoglobulin injection may be given within six days to prevent or lessen the effects of the disease.
(M. Brasholt, Public Health Medical Officers East, P.H. Andersen, Department of Infectious Disease Epidemiology)