Salmonella enterica infections are monitored via the laboratory surveillance system and the primary characterisation is done by serotyping. The majority of the serotypes are zoonotic and transmitted via foodstuffs. A considerable number of serotypes exist, though only two, S. Enteritidis and S. Typhimurium, normally account for about two thirds of all zoonotic salmonella infections in Denmark. The serotypes S. Typhi and S. Paratyphi are host-specific to humans, and infection with these serotypes is therefore notifiable via the individual notification system on Form 1515. 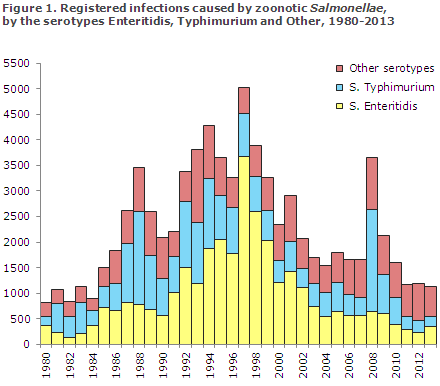 The ten most frequent serotypes are presented in Table 1. S. Enteritidis, S. Typhimurium and the monophasic variant hereof accounted for 60% of all infections. The second most frequent infections, each representing fewer infections per serotype, were serotypes which were also among the most frequently occurring serotypes in recent years. In all, a total of 114 serotypes were registered. The group Other serotypes seen in Table 1 thus comprises 104 serotypes each of which occured only rarely. Many of these were acquired during foreign travel. 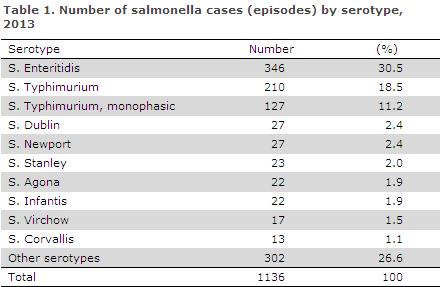 Incidences by population groups are presented in Table 2 and Table 3. Figure 2 shows the age-specific incidence. As in previous years, the below five years age-group accounted for a relatively high number of diagnosed salmonella infections. This also reflects that relatively more persons in this age-group are tested for salmonella. The incidence by area is presented in Table 3. The overall incidence of 20 cases per 100.000 varied with geographical area from 14 to 25 cases per area, Table 3. 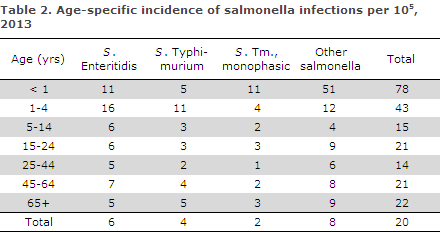 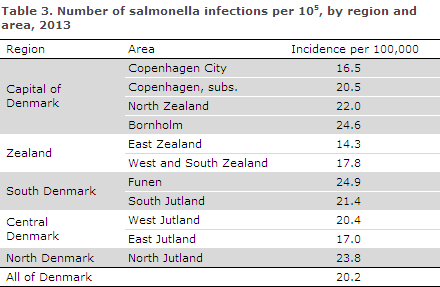 Typhoid and paratyphoid fever are caused by S. Typhi and S. Paratyphi A, B and C. In addition to the laboratory surveillance system, typhoid as well as paratyphoid fever is notifiable for the treating physicians via the clinical notification system on Form 1515. Figure 2 shows the number of cases recorded in the two systems since 1995. Generally, more laboratory notifications than clinical notifications are received. The number of cases is stable. The increased number in 1999 was due to a large outbreak in Turkey, which, among others, included Danish tourists, EPI-NEWS 38/99. 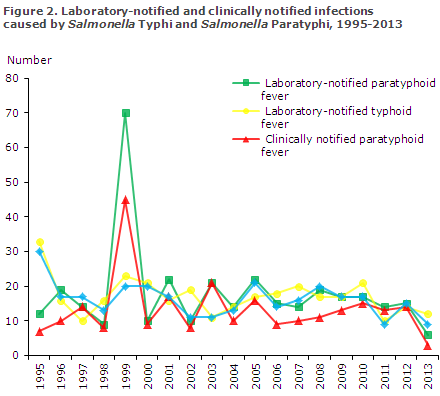 Typhoid and paratyphoid fever infections were previously reported for periods spanning several years, most recently the two-year period covering 2012 and 2013, EPI-NEWS 17/13. The present report covers 2013 during which year a total of 19 infections were registered via the laboratory surveillance system, a 44% decrease compared with 2012. The cases were distributed on 12 cases of S. Typhi and five, one and one cases of S. Paratyphi A, B and C, respectively.

A total of four persons who were infected with typhoid fever were registered as having been infected during stays with relatives in India, Bangladesh or Pakistan. The remaining four were infected during tourist travels to India, Thailand or Mexico. Among those infected with paratyphoid fever, one person was registered as having been infected abroad during a stay with relatives and two during tourist travels to India or Thailand.

Salmonella isolates submitted to the SSI are typed continuously by use of serotyping and molecular biology methods. This is, among others, done to facilitate outbreak detection. In 2013, a series of clusters with identical types was detected and investigated. Among these clusters, 12 were considered outbreaks.

These underwent epidemiological investigation. Two outbreaks remained under investigation at the beginning of 2014, and are therefore not described in the present report. Three outbreaks comprised more than 20 cases, Table 5. The outbreaks were investigated in collaboration with the Danish Food Institute DTU and the Danish Veterinary and Food Administration.

The first of these outbreaks stretched across the winter of 2012-2013 and comprised a total of 21 cases, including ten in 2013. The outbreak was caused by a distinct MLVA type of S. Typhimurium with the resistance profile Amp-Str-Smx (see below for details). The affected patients mainly resided in Region Zealand. Pork provided by a specific abattoir and a single butcher's shop was identified as the source.

Another S. Typhimurium outbreak occurred in the spring of 2013. Once again the outbreak was identified as the occurrence of a specific MLVA profile. This strain, however, was fully sensitive to antibiotics. The outbreak comprised a total of 43 cases whose residences were spread across Denmark. The epidemiological investigations pointed towards various types of pork as the source of the outbreak, but the outbreak was not fully described.

The third substantial outbreak occurred among travellers to a number of tourist destinations, primarily located in South-West Turkey, EPI-NEWS 38/13. The outbreak was caused by S. Enteritidis of one of six different, but related MLVA types. Cases occurred throughout the year, but the far majority were observed in the summer and late summer, when the number of travellers to Turkey peaked.

A total of 121 patients were infected with the six salmonella strains, barring a limited number who travelled to other destinations than Turkey. Among these, 88 could be interviewed and it was established that they had been in Turkey when they were exposed. We presume that the majority of the patients who could not be interviewed had also visited Turkey. The patients' stays covered many cities and a large number of hotels, and several travel agencies were involved. It was not possible to further narrow down the source of the infections in Turkey.

In 2013 as in previous years, the Department of Infectious Disease Epidemiology collected information on any infection acquired abroad when such information was not provided with the notifications. In telephone interviews, patients were asked about the date of disease onset and whether they had travelled abroad within a seven-day period prior to disease onset. Information on country of infection was recorded for a total of 770 (68%) salmonella patients.

Considering exclusively the patient group for whom the country of infection is known, 52% were infected abroad. This overall figure covers considerable variation between serogroups. For S. Enteritidis, the share of infections acquired abroad comprised 79%. For S. Typhimurium, the corresponding figure was 18%, for the monophasic S. Typhimurium 33% and for all other salmonella groups, the share was 52%.

Among these, the highest number of infections was seen in Turkey, viz. a total of 123 patients. Followed by these popular tourist destinations: Thailand with 54 patients, Egypt with 33 patients, Spain with 23 patients and Tunisia and India with 14 and ten infected patients, respectively. As mentioned above, all patients notified with typhoid or paratyphoid fever infection were registered as having been infected abroad.

The most common type of resistance observed was the group of isolates resistant to Amp-Smx-Str-Tet. These comprised a total of 11% of the tested isolates. This resistance profile is also common in Danish pigs, and outbreaks have therefore often – though not exclusively – been associated with Danish pork. The group of other isolates that are resistant to four or more classes of antibiotics comprised 13% – and this group counted 62% of the patients who had a travel history with infection abroad.

The overall distribution on susceptible/resistant isolates has not changed substantially in recent years. The recorded inter-annual fluctuations are mainly explained by larger outbreaks with resistant types. 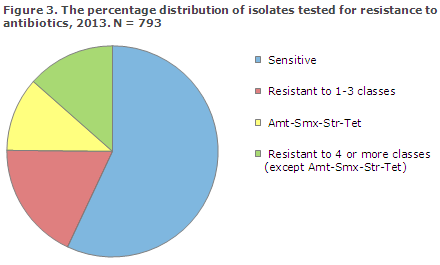 For further information, please see ssi.dk/data which links to the sub site "Monitoring presented as numbers, figures and maps (in Danish: Overvågning i tal, grafer og kort) at the website of the SSI. Here, in the drop down menu "Laboratorieanmeldelser", you can select the Salmonella and in the menu "Individuelle anmeldelser" you can select the notified typhoid and paratyphoid fever-infections. You can also generate statements covering specific time periods, locations and person groups, and choose to have data presented as either figures or tables (the data are available for download in Excel format).

The number of salmonella infections in Denmark is stable. The overall number of infections has remained largely unchanged for the past three years. Compared to the situation in the 1990s, the current number is low. Overall, slightly more than half of all infections are acquired during foreign travel.

The current stable level has been achieved following long-standing efforts to remove S. Enteritidis from Danish eggs and chickens, a goal which was achieved three years ago and which is now reflected in the low number of patients registered with this previously very frequent serotype. Four in every five S. Enteritidis cases registered are acquired abroad.

In 2013, the majority of these cases were associated with vacational travels to Turkey as the year was dominated by a major outbreak with S. Enteritidis among Danish tourists in Turkey. Apart from this, there were only few large outbreaks; as the overall number of infections has decreased, the number of salmonella outbreaks has also receded.

Thus, in 2013 we only observed two outbreaks on Danish soil with more than 20 cases. Both were caused by S. Typhimurium. Furthermore, a noteworthy decrease was seen in the number of infections with the monophasic variant of S. Typhimurium, contrary to the increasing trend this variant has followed in recent years. This may possibly be explained by the absence of outbreaks with this serotype in 2013.

Infections with the monophasic variant of S. Typhimurium and, in particular, with S. Typhimurium are still mainly acquired in Denmark, and these infections thus continue to be a national problem. It should be remembered that the registered number of patients only includes laboratory-confirmed cases, whereas the actual number of persons who have fallen ill due to salmonella is considerably higher. Zoonotic salmonella infections therefore continue to represent a substantial disease burden and entail considerable costs to society. Therefore, continued control and monitoring are essential.

The number of typhoid and paratyphoid fever infections is also stable. All such cases were imported. Vaccination against typhoid fever is recommended before travels to the Indian subcontinent lasting more than two weeks, long-term travels to other endemic areas, and for stays with family and friends in endemic areas regardless of the duration of stay.
(S. Ethelberg, L. Müller, C. Kjelsø, K. Mølbak, Department of Infectious Disease Epidemiology. (K.E.P. Olsen, E.M. Nielsen, M. Torpdahl, Department of Microbiology and Infection Control)