Ninety-nine of the notified persons were Danes (including one second-generation immigrant) and 87 were immigrants. Ten were notified as tourists, two persons were "trafficking victims" or "staying illegally in Denmark", and for one person there was no information on origin.

A total of 85 (43%) had been infected in Denmark and 106 (53%) abroad. Figure 1 presents the distribution by notified, sexually transmitted cases in Denmark and abroad. In eight cases (4%), the country of infection was not stated, Table 2.

Among 193 cases with information on the mode of infection, 175 (91%) were infected via sexual contact, including 81 men who have sex with men (MSM) and 94 heterosexually infected (HTX) cases. Thirteen (7%) had been infected by intravenous drug use (IDU). A total of five (3%) were infected perinatally, all of whom were born abroad. 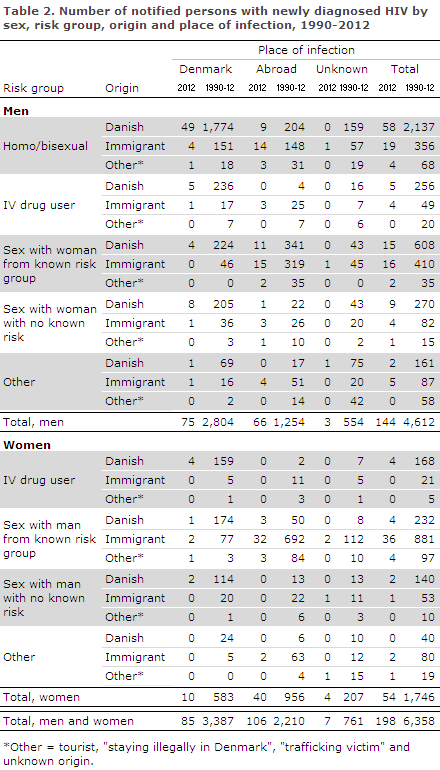 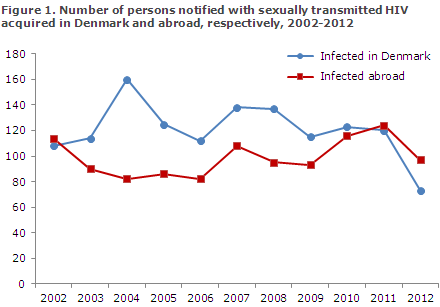 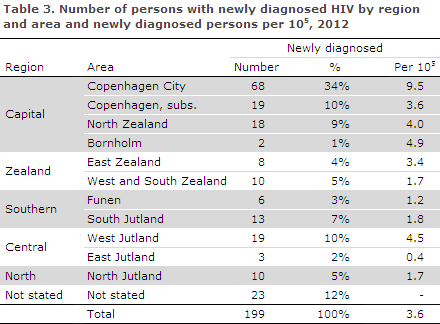 Among the 175 sexually infected cases, information on place of residence was available for 161 (92%). As previously, the distribution of MSM and HTX in Copenhagen (city and suburbs) and in the remaining parts of Denmark differed, Figure 2. 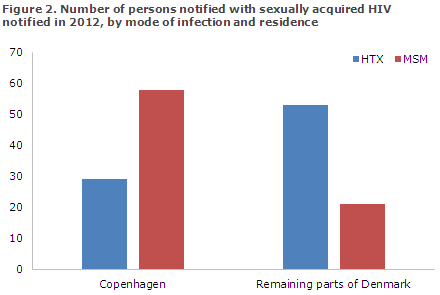 Information on the year of immigration was available for 62 (85%) of the 73 immigrants who were notified as having been infected prior to their arrival to Denmark. A total of 29 (47%) of these had immigrated in 2012.

Among 39 immigrant women, 37 (95%) were HTX, 32 (86%) of whom were infected abroad. In three cases, the country of infection was not stated. Four of the 37 (11%) women were detected via the pregnancy screening programme, EPI-NEWS 22/13. Two were infected perinatally abroad.

Among the ten tourists, eight were men and two women. Four were MSM, six HTX. Additionally, in 2012 two persons (one women and one transsexual person) were notified as "trafficking victim" and "staying illegally in Denmark". For one person, the notification lacked information about sex, origin and mode of infection.

Information was available on CD4 count at the time of diagnosis for 158 (89%) of the 178 notified persons who resided in Denmark and who were not undergoing treatment at the time of notification. In the remaining 20 cases, CD4 counts were unavailable.

The CD4 count is a marker that indicates how HIV virus affects the cellular immune response. A CD4 count below 350 cells per µl blood is currently an indication for initiation of HAART treatment in Denmark if the patient has not wished to initiate such treatment earlier. 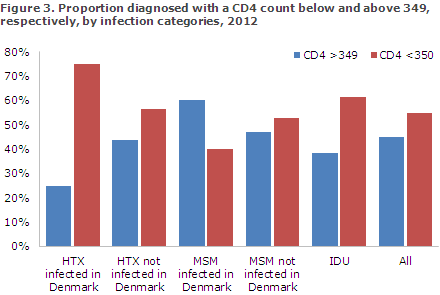 Eight MSM tested positive at a Checkpoint (testing site for MSM where HIV and syphilis testing is available without an appointment and the results are given immediately), seven in Copenhagen and one in Aarhus; all were infected in Denmark.

In 2012 the section for Virology Surveillance and Research diagnosed four new cases of transmitted, resistant HIV. This corresponds to 4% of all the tested newly diagnosed patients, Figure 5. The level of transmitted resistance has accordingly decreased slightly with respect to 2011, which is in line with the trend seen during the previous two years.

In 2011 the distribution of resistance mutations was equal across the three treatment groups, whereas 2012 has seen an increase in the share of PI and no resistance mutations for NNRTI, Figure 5. The statement comprises all newly diagnosed HIV patients who are referred to a department of infectious diseases and have a genotypic resistance test performed within a year after their diagnosis and prior to treatment initiation.

About 50% of the newly diagnosed persons are included, corresponding to approx. 150 persons annually. Since the study was initiated in 2001, HIV sequences from 1,796 patients have been tested, and mutations causing resistance were found in 107 (6%) of these sequences. 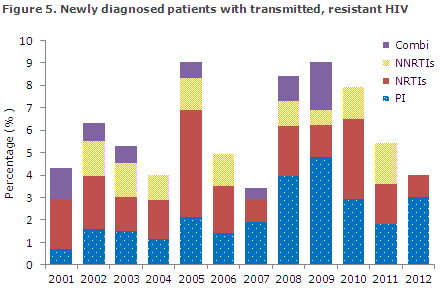 Among women, five were HTX and one IDU. The median age was 47 years (range 31-54 years). Four women were immigrants; three were infected in Sub-Saharan Africa and one in Thailand.

Two of the persons who were notified with AIDS in 2012 have died. 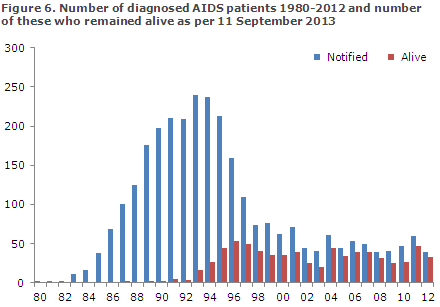 MSM and immigrants who were infected with HIV by HTX prior to their arrival to Denmark remain the primary infection groups. These two groups are not equally distributed geographically; the majority of HIV-positive MSM reside in the Copenhagen area, while the majority of HIV-positive HTX re-side in other parts of Denmark. If analyses are performed based on area-specific data rather than national data, the results cannot be used to describe the situation in the entire country.

For HTX immigrants, prevention is not so much about keeping the infection from spreading, but mainly about diagnosing HIV infection as quickly as possible to maximise the affected persons’ treatment and guidance options. Less than half of the HTX infected immigrants with a known date of entry to Denmark had arrived in 2012.

The Danish Health and Medicines Authority's guidelines on HIV and hepatitis B and C recommend HIV testing of immigrants from highly endemic areas upon their arrival to Denmark. These guidelines are not followed to a sufficient extent, as less than half of the HIV-infected immigrants are diagnosed the year they arrive in Denmark.

Every year a limited number of Danish HTX are notified who have no known risk. These individuals are probably very hard to identify Beforehand.

The Danish effort to prevent transmission of HIV therefore targets Danish and foreign MSM living in Denmark and Danish HTX with a known risk, including sex tourists. For HTX, Thailand is a popular destination for sex tourism, whereas European cities and Spain are popular destinations for MSM.

Studies from other countries have demonstrated that PrEP (pre-exposure prophylaxis with HIV medicine as is known from e.g. pre-exposure malaria prophylaxis) is effective if used according to guidelines. In Denmark, the in-troduction of PrEP prescription for these short-term travellers may be considered.

In Denmark, HIV treatment and out-patient check-ups are free and they are performed at a limited number of centres which have considerable expertise. In line herewith, HIV patients who receive treatment in Denmark have access to a growing number of pharmaceuticals which can be given in different combinations to achieve a satisfactory treatment effect and an acceptable adverse reaction profile.

Finally, in Denmark HIV treatment is provided on a wide indication including a patient's fear of transferring the infection to his or her partner. On individual assessment, an HIV-positive person may therefore receive treatment regardless of his or her CD4 count at diagnosis on the grounds of a substantially reduced risk of infection achieved through treatment.

In Denmark, the limiting factor in the so-called HIV cascade (testing, lincage to and retention in care and treatment, and reducing infection risk) is confined to insufficient testing of risk group persons. In 2012, more than half of the newly diagnosed persons had a CD4 count below 350, which for most meant that they had been HIV infectees for several years.

Among MSM, 44% were diagnosed with a CD4 count below 350, which is fully in line with results from the past five years, EPI-NEWS 48/12. Nevertheless, there is considerable variation in the share of HIV positive MSM who are tested late.

It is encouraging that particularly young MSM are diagnosed earlier; 73% of the 17-39-year-olds were diagnosed with CD4 counts of 350 or above. The fact that very young HIV-positive MSM are less likely to be tested late contributes to this difference (so-called immortal time bias). This phenomenon, however, cannot explain all of the difference as the distribution by age groups does not follow a smooth course, but rather "breaks" at 40 years of age.

MSM under 40 years of age may have been more susceptible to the message concerning frequent testing than older MSM. Previously, MSM who had tested negative many times were often told not to use the HIV test "as prevention". Today, most health professionals will encourage MSM who practice unprotected sex to be tested as frequently as possible.

In 2012, a total of eight MSM were diagnosed at Checkpoints, seven in Copenhagen and one in Aarhus. These constitute 13% of the 56 MSM residing in the Capital Region of Denmark and of the eight residing in the Central Jutland Region, respectively.

Checkpoints therefore contribute with a considerable share of the positive tests, and they are expected to contribute even more when a more outward-oriented testing strategy is introduced in 2013; this strategy will, e.g., target MSM saunas and sex clubs in Copenha-gen.

From 22 to 29 November, the first ever European HIV testing week will be held. The objective is to encourage people to openly discuss HIV testing, strengthen the dialogue between partners in and outside of healthcare and encourage increased normalisation of HIV testing in European healthcare.

The week's theme is "Talk HIV, Test HIV". The initiative targets physicians, NGOs, test sites, hospitals, clinics and policy-makers, and the objective is to help more people to become aware of their HIV status and to reduce the considerable number of HIV-infected persons who currently have HIV in Denmark and in the rest of Europe without being aware of it.

The week is coordinated by the pan European initiative HIV in Europe www.hiveurope.eu, the coordination office of which is located with CHIP (the Copenhagen HIV Programme www.cphiv.dk ) at Copenhagen University Hospital (Rigshospitalet) and at the University of Copenhagen and builds on experience from a successful British HIV testing week held in 2012 All organisations, clinics, GPs and hospitals are invited to participate and can register for active participation at the website.

They can share their experience on raising awareness about HIV testing during the week which would include anything from specific testing activities to political advocacy and information campaigns among risk groups or other activities aiming to reduce barriers to HIV testing.

At the website of the European HIV Testing Week, a wide range of background material is available along with practical information about how you may participate and share experiences. www.hivtestingweek.eu