In future, the HIV and AIDS Report will comprise both the annual report and the special "pink" HIV/AIDS report.

2011 saw a total of 267 notified cases of newly diagnosed HIV infection, 193 males and 74 females. The median age was 39 years for males (range 3-73 years) and 34 years for females (range 9-66 years). A total of three children aged three, four and nine years were notified; the remaining cases were 18 years of age or older. 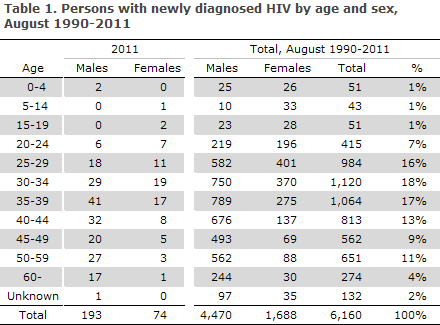 Among the notified cases, 157 were Danes (including five second-generation immigrants), 89 immigrants, 15 tourists, and in six cases it was stated that the person was a victim of "human trafficking" or was "in Denmark illegally".

Among 260 cases with information on mode of infection, 247 (95%) were infected via sexual contact, including 114 men who had sex with men (MSM) and 133 heterosexually infected (HTX). Ten (4%) were infected by IV drug use (IDU). A total of three were infected perinatally. Two of the children were born abroad; one child was born in Denmark by an African mother prior to the introduction of general HIV screening of pregnant women EPI-NEWS 14-15/12. 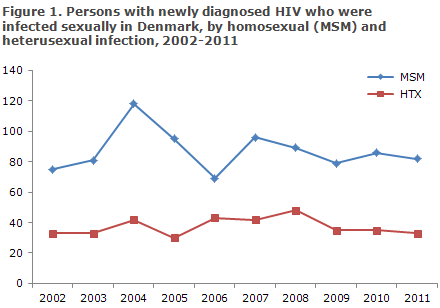 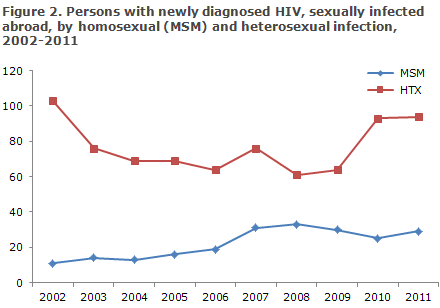 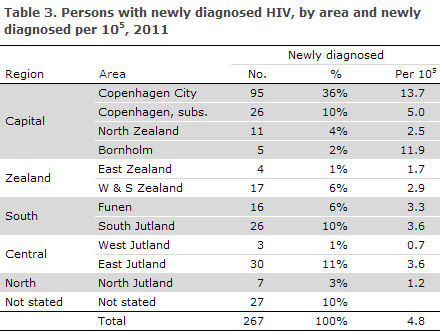 Information on year of immigration was available for 69 (97%) of the 71 immigrants who were notified as having been infected prior to their arrival in Denmark. A total of 42% of these had immigrated in 2011.

Among 46 Danish males, 21 (46%) were MSM. A total of 23 (50%) were HTX: 19 cases were infected by a female from a known risk group and four cases by a female without known risks. One was infected via IDU, and one was infected perinatally. Among MSM, a total of seven (33%) were infected in Denmark; the corresponding figure among HTX was four (17%). In two cases (one MSM and one HTX), the country of infection was not stated.

Among 43 immigrant females, 41 (95%) were HTX: in 39 cases infected by a male from a known risk group and in two cases by a male without known risks. One was IDU and one was infected perinatally. Among HTX infected immigrant females, seven (7%) were notified as having been infected in Denmark. The remaining 40 females were infected abroad. Eight of the 45 (18%) females were detected via the Pregnancy Screening Programme, EPI-NEWS 14-15/12.

Among the 15 tourists, four were males and 11 females. One was MSM, 11 HTX, one IDU and two had no known risks. Three of the notified tourists were pregnant. Furthermore, 2011 saw the notification of four persons stated as victims of "human trafficking" and two as "illegally in Denmark".

Among the 245 notified as residing in Denmark, information on CD4 count and/or AIDS at time of diagnosis was available for 225 (92%), Figure 3. In the remaining 20 cases, CD4 counts were unavailable.

The CD4 count is a marker that indicates how HIV virus affects the cellular immune response. CD4 counts < 350 cells per µl blood currently constitutes indication for initiation of HAART treatment in Denmark. Among MSM, the share of infected persons with a CD4 count of 350 or above at diagnosis has shown no tendency to increase in the past five years, Figure 4. 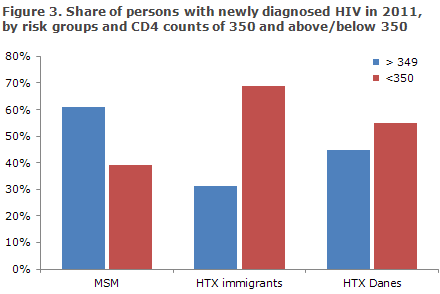 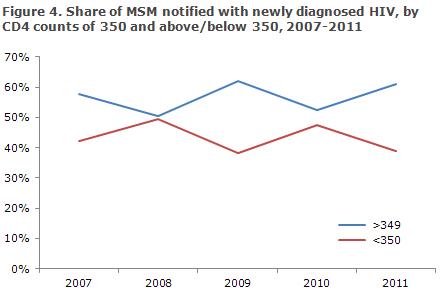 Among 91 MSM, who were notified as homosexuals and had stated a CD4 count, 34% had a CD4 count below 350 at diagnosis, while the corresponding share was 60% for MSM notified as bisexuals.

The share of resistant HIV among the newly diagnosed cases is 6%, Figure 5.

The statement comprises all newly diagnosed HIV patients who are referred to a department of infectious diseases and have a genotypic resistance test performed within a year after diagnosis, prior to treatment initiation. About 50% of the newly diagnosed are included, approx. 150 persons annually. In all, sequences from 1,700 persons have been tested and mutations associated with resistance were observed in 103 sequences (6.1%). 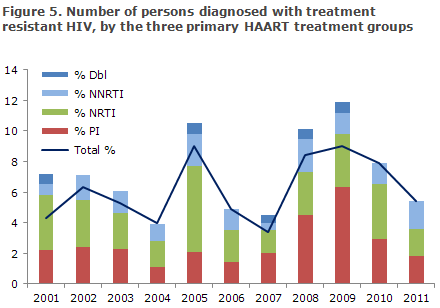 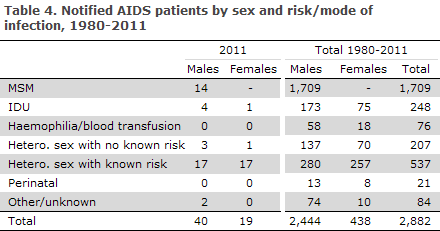 A total of 27 were immigrants; 13 males and 14 females. Among the immigrants, 21 (78%) had concurrently been diagnosed with HIV and AIDS. One of these had immigrated to Denmark in 2011 and three in 2010, while the remaining had immigrated several years earlier.

Figure 6 presents the number of persons diagnosed with AIDS in the 1980-2011-period and the number of these who remained alive as per 13 November 2012. 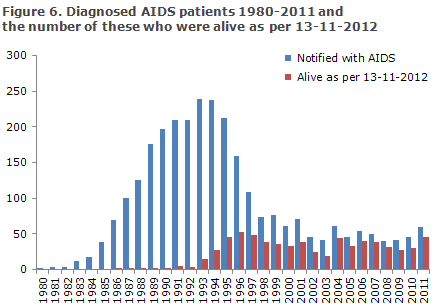 MSM and immigrants who were infected by HTX prior to their arrival in Denmark remain the primary infection groups. There is strong evidence that well-implemented HIV combination treatment (HAART) yields virus suppression which reduces morbidity in the individual patient while reducing the risk of transferring the infection to near-negligible levels. Therefore, as many as at all possible of the presently undiagnosed HIV positives should be tested and offered treatment. HIV tests do not require informed consent, but may be offered as any other blood sample, i.e. based on the patient's oral consent. The test should be offered on a broad indication to persons who may have been at risk, including immigrants from highly endemic countries. The test should be performed when these persons enter Denmark or as soon as possible thereafter.

Among the heterosexually infected cases, the share diagnosed late is even greater than among MSM. Particularly, persons who were heterosexually infected by persons from Africa and Asia are diagnosed late: only in 23% and 34% of the cases, respectively, were CD4 counts above 350. In the Danish Health and Medicines Authority's test guidelines, EPI-NEWS 46/09 and EPI-NEWS 48/09, HIV testing is recommended for all immigrants who arrive from highly endemic areas. Furthermore, testing is recommended of persons presenting with symptoms not readily explained, including the so-called indicator conditions.

As a novelty, this year's HIV report includes data on treatment resistance. It is encouraging that the occurrence of transferred resistance mutations remains low in Denmark. It is, however, important to continue monitoring treatment resistance, not least given the possibility of introducing a so-called PREP, pre-exposure prophylaxis, e.g. preventive HIV treatment for instance in MSM who have many partners and where it is estimated that use of a condom will not provide adequate protection. Such treatment has recently been made available in the US.

Denmark still sees a limited number of AIDS notifications, and the majority are concurrently notified with HIV. This means that the affected persons were infected many years before being tested for HIV. In the limited number of cases in which HIV develops into AIDS, treatment failure or other causes such as side effects or lacking adherence may impede optimal treatment of the involved patient.