2012 saw a total of 137 notified cases of bacterial meningitis. Figure 1 and Table 1 show the distribution by aetiology and age. Meningococcal meningitis (38 cases) in 2012 is described in EPI-NEWS 37/13. 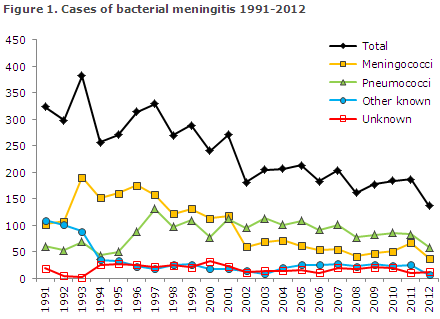 2012 saw a total of 59 notified cases of meningitis with Streptococcus pneumoniae. In all, 57 of these cases were detected by culture and two by PCR.

For 18 patients, information was available on underlying conditions and/or dispositions: Five had malignancies, two had biliary atresia, two had received neurosurgery, two were splenectomised, one was an alcohol abuser, one had Evan's syndrome, one multiple sclerosis, one idiopathic liver cirrhosis, one dural defect, one chronic pulmonary disease and one was receiving haemodialysis.

In 29 cases, information on possible infection foci was available: 16 had an otogenic focus and/or sinusitis or other infection of the upper respiratory system and seven had pneumonia.

Two had a possible dental focus, two a possible biliary focus, one had recurrent endocarditis and one spreading from bacterialbacterial arthritis. For 52 patients, information was available on possible late sequelae of the condition: 11 died and six suffered severe neurological sequelae including a single case of bilateral deafness, a case of complete palsy of the oculomotor nerve, a case of hydrocephalus, a case of pneumocephalus, and two patients suffered occipital infarctions causing hemianopsia and paresis.

Six had cognitive sequelae including difficulty with concentration and memory and headaches, whereas four had unspecified functional impairmentand two suffered hearing impairment. A total of 23 had no sequelae.

Meningitis due to other streptococci than pneumococci was detected in eight cases. Three of these were caused by group A streptococci (GAS): all adults (41-66 years) of whom two had otitis media as a focus.

One of the two recovered without sequelae, whereas the other presented with acute pyogenic discitis, probably due to the GAS bacteraemia which occurred in conjunction with the patient's meningitis. In the third case, no information was available on risk factors; this patient's course was fatal.

Group B streptococci were detected in three cases. One of the cases was confirmed vertical infection in a neonate. Another case was a four-month-old infant for whom the route of infection was not known. Both recovered without sequelae. The final case was a 72-year-old patient with neurosurgical risk factors who suffered severe neurological sequelae.

Four cases of H. influenzae meningitis were notified. One was a serotype b case in a nine-month-old child with no known risk factors who recovered without sequelae. The child had received a single dose of Hib vaccine at three months of age, but no dose at five months of age.

None of these had sequelae. Additionally, a single case of H. influenzae of serotype a was notified in a ten-month-old child from Austria. For this case, there was no information on risk factors or sequelae to the disease.

A total of nine cases of meningitis caused by L. monocytogenes were notified. Eight were infected in Denmark, one in Greenland. Eight cases were observed in patients aged 50+ years. Four of these patients were chronic alcohol abusers. Of the four patients two died, one had hydrocephalus and one suffered no sequelae.

Of the remaining four patients above 50 years of age, one was immunosuppressed iatrogenically and experienced no sequelae. For one patient with chronic pulmonary disease, no information was available on sequelae. In two patients aged 78 and 85 years, there were no information on disposing factors. Both recovered without sequelae.

The final case was a 34-year-old who was receiving cytostatic treatment and developed severe neurological sequelae.

Staphylococcus aureus was detected in three adults, two of whom had endocarditis. Both of these cases were fatal. One patient developed otitis media and sequelae in the form of dizziness. S. epidermidis and S. warneri were detected in the cerebrospinal fluid of a single patient with dural defect; information on sequelae was not available for this patient.

Escherichia coli was detected in an infant with possible neurological sequelae and in a 64-year-old patient who had cognitive sequelae.

In a total of 13 cases, patients were notified on the basis of clinical tests and/or cerebrospinal fluid cell counts consistent with bacterial meningitis, but without detection of bacteria by culture.

For 12 patients, information was available on the course of the disease and late sequelae: one died, one case of hydrocephalus and cognitive dysfunction was seen and also two cases of headache. A total of eight patients had no sequelae.

The number of bacterial meningitis cases of unknown aetiology decreased from 23 to 13. Meningitis caused by other streptococci than pneumococci decreased from 14 in 2011 to eight in 2012, which is in line with previous years' reports.

The number of notified cases of pneumococcal meningitis followed a decreasing trend from the 100 annual cases observed in the 2000-2007 period before the introduction of the seven-valent conjugate pneumococcal vaccine (PCV7) into the childhood vaccination programme, EPI-NEWS 37a+b /07, to 82 cases in 2011 and 59 cases in 2012.

Furthermore, a 20% decrease was observed in the incidence of invasive pneumococcal disease in the entire population; from 1,056 annual cases in the 2000-2007 period to 864 cases in 2012, EPI-NEWS 17/13.
C.H. Suppli, P. Valentiner-Branth, Department of Infectious Disease Epidemiology; S. Hoffmann, Microbiology and Infection Control)