On 31 March, the Chinese health authorities announced the first cases of avian influenza A (H7N9) in China. As per 23 April, a total of 108 cases have been reported to the WHO, including 22 fatalities.

The first confirmed cases in China presented with symptoms in mid-February. Patients have had influenza-like symptoms followed by severe lower respiratory tract infections.

It remains unknown to which extent milder cases have occurred for which patients did not consult a doctor.

The cases are geographically spread across several Chinese provinces, mainly in East China. Contact to animals or animal environments was reported in nearly half of the patients.

The median age of the reported cases is 65 years and the age of the affected persons ranges from four to 87 years.

Contact tracing was performed among more than a thousand contacts to the confirmed cases, and no signs were found of effective person-to-person transmission.

The reservoir of the new virus has not been fully established, but poultry or wild birds are suspected.

The new influenza A (H7N9) virus

The new avian influenza A (H7N9) virus consists of genetic material from a minimum of three different influenza viruses originating from birds, but the majority of the genetic material probably originates from a type H9N2 virus, which is common in Chinese poultry.

Preliminary analyses of the virus genome indicate that the H7N9 virus has changed in a way that allows it to infect humans and swine more readily than other types of avian influenza virus. H7 virus has previously infected humans and is typically associated with mild symptoms.

The new virus has not previously been observed in humans or animals, but after the outbreak it has been isolated from a limited number of pigeons, chickens and ducks from Chinese markets located in the affected areas.

The virus is a low-pathogenic avian virus which reportedly does not cause serious disease in birds. This increases the risk that the virus may spread unnoticed among wild birds.

The virus seems to be susceptible to antiviral agents such as oseltamivir (Tamiflu®) and zanamivir (Relenza®), but experience from antiviral treatment in patients is currently limited.

The outbreak has attracted considerable attention from the WHO and other international authorities because it is a new subtype of influenza virus that can be transmitted to humans and that is frequently associated with serious disease.

This raises the question of the pandemic potential of the new virus. This is currently unknown.

So far, no signs of effective person-to-person transmission have been observed, which is a prerequisite for endemic spreading. Contact with birds or animal environments was established in less than half of the cases, and the association with poultry has therefore yet to be confirmed.

Additional studies are needed to describe the reservoir of the new virus. As the outbreak is caused by a low-pathogenic avian influenza virus that probably does not cause symptoms in poultry or wild birds, the outbreak may be more difficult to contain than e.g. previous outbreaks with the high-pathogenic avian influenza A (H5N1), which is only seen in persons who have come into close contact with diseased poultry.

The Chinese health authorities have intensified monitoring of the new influenza virus in both animals and humans to ensure rapid diagnosis, treatment and contact tracing.

The health authorities cooperate closely with the WHO to describe the specific properties of the virus and to identify any infection reservoirs.

No travel restrictions have been implemented and the present risk of the virus spreading to Europe is considered as being limited.

Nevertheless, physicians should keep in mind avian influenza for persons with severe lower respiratory tract infections who within ten days prior to symptom onset have returned from stays in China or other countries where avian influenza may occur, including Vietnam, Cambodia, Bangladesh, Indonesia and Egypt.

For more information on precautions, diagnostics and duty of notification in the context of avian influenza A (H7N9), please see www.ssi.dk.

Typhoid and paratyphoid fever are septic febrile diseases caused by the salmonella serotypes Salmonella Typhi and Salmonella Paratyphi A, B and C. The route of infection is faecal-oral from human faeces.

Typhoid and paratyphoid fever are notifiable for physicians and laboratories alike. The Department of Infectious Disease Epidemiology sends out reminders for clinical notifications on the basis of laboratory-notified cases.

In 2011 and 2012, six and ten cases of typhoid fever were notified along with 12 and eight cases of paratyphoid fever, respectively. The majority of the notified cases occurred in adults aged 20-39 years, Table 1. 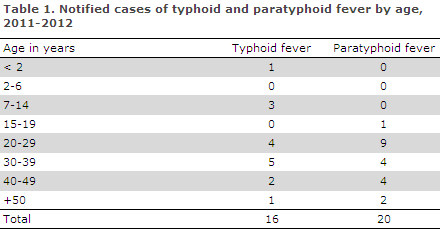 As previously seen, the overwhelming majority (94%) was infected in Pakistan, India or other parts of Asia, Table 2.

A total of eight of the 16 cases of typhoid fever were of non-Danish origin. This included four adults and two children < 15 years of age infected during a family stay in their country of origin. Two persons were on tourist or business journeys in India and Pakistan, respectively.

A total of eight Danes were infected with typhoid fever, Table 3.

Among these, three were infected in Pakistan; one while staying with family, two during a tourist journey. One of these two latter cases was a child below 15 years of age.

A total of 17 (85%) cases of paratyphoid fever were acquired in Asia, including 12 in India and Pakistan.

Two cases were acquired in Turkey and South & Central America, respectively, and in one case the country of infection was unknown, Table 3.

A total of six Danes were infected while travelling or staying abroad, including three in Pakistan, one in India, and in two cases several potential countries of infection were stated.

A total of 14 cases of paratyphoid fever occurred in immigrants, Table 3. In all, 13 were infected in their country of origin or during tourist travels in Asia, including five in Pakistan and three in India. One was infected in Turkey.

Isolates should be submitted to the Department of Microbiology and Infection Control, SSI.

The number of cases is essentially in line with previous years.

Infection is mainly observed following travels to the Indian subcontinent.

Typhoid fever vaccination is recommended for travels to the Indian subcontinent that last more than two weeks and for stays with family and acquaintances in endemic areas, regardless of the duration of the stay EPI-NEWS 6/11 and EPI-NEWS 26/12.