In Denmark, invasive meningococcal disease (MD) is monitored via the clinical notification system (Form 1515) and by the Neisseria and Streptococcal Reference laboratory which receives meningococcal isolates from the departments of clinical microbiology.

In 2012, the Department of Infectious Disease Epidemiology received a total of 58 notifications concerning patients with invasive MD. A reminder had to be sent out to ensure notification in 22 of the cases. The distribution by region and area is presented in Table 1. 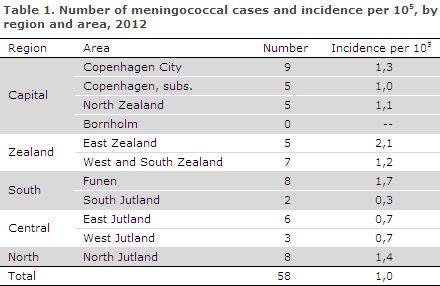 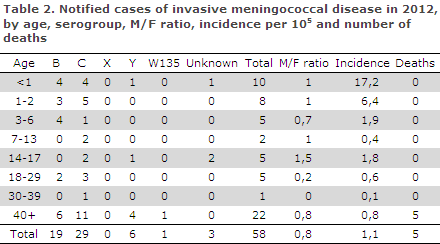 Meningococci were detected by culture in 54 (93%) of the notified cases. A single case was detected by PCR, two by meningococcal antibody testing and in one case the diagnosis was based exclusively on clinical observation. In the three latter cases, serogroup determination was therefore not possible. A total of 57 cases were presumably infected in Denmark and only one case abroad (Norway).

Fatality and sequelae from the disease

A total of five (9%) patients died, including two serogroup C and three serogroup Y cases. All five patients had septicaemia.
Among the six patients who were diagnosed with serogroup Y, the mortality was 50%. The three patients who died were all older than 60 years of age. Two of the patients had known comorbidity and no information on underlying disease was available for the third patient.

Information on sequelae was available for 44 of the remaining patients. A total of 33 (75%) experienced no sequelae. For 11 patients, the following sequelae were reported: Five had hearing impairment, two skin necrosis, two had neurological symptoms (tremor and dysaesthesia of the upper extremities), and one suffered from headaches. Furthermore, a single case of Waterhouse-Friderichsen's syndrome was reported.

Any physician receiving an MD patient for treatment should immediately notify the case when clinical suspicion arises. Notification is by phone to the Medical Officers of Health in the region where the patient resides and in writing using Form 1515 to Statens Serum Institut, Department of Infectious Disease Epidemiology.

Household-like contacts to patients with suspected or verified MD are offered prophylactic antibiotics, EPI-NEWS 17/10.
Vaccination is offered following verification of MD caused by serogroup A, C, W135 or Y to the group of persons who have also received antibiotics prophylaxis.

The 58 notified cases of invasive meningococcal disease recorded in 2012 was the lowest number observed since monitoring of the disease was initiated in 1980. As in previous years, the MD incidence is highest in the group of children that is younger than one year. The number of serogroup B cases decreased from 32 in 2011 to 19 in 2012, which is a continuation of the trend observed since the beginning of the 1990s, Figure 1.

The number of serogroup C cases increased from 26 in 2010 to 46 in 2011 (EPI-NEWS 38/2012), but then decreased to 29 in 2012 which is in line with the level observed in 2010. However, serogroup C continued to comprise a substantial share of the total number of MD due to the continued decrease in MD caused by serogroup B.

In 2013, a vaccine against serogroup B meningococci was approved by the European Medicines Agency. The UK's Joint Committee on Vaccination and Immunisation subsequently found that further data are needed to determine the vaccine's efficiency and if the vaccine reduces the susceptibility of the upper third of the throat to serve as a carrier reservoir.

In conjunction with an expected increased occurrence of fever due to the vaccination along with the economic costs and the lack of data on rare adverse events, this has recently caused the UK to decide against introducing the vaccine in their childhood vaccination programme at present. In the UK, serogroup B cases constituted 80% of the MD cases in 2012. The high share of group B infections in the UK may be explained by the fact that serogroup C vaccination was introduced in that country in 1999.

The number of serogroup Y cases was in line with that observed in 2009 and 2011. The high reported 50% mortality should be interpreted with caution as the basis for this calculation was limited to six cases. Other countries have also recorded increased mortality rates for serogroup Y MD and this is believed to be associated with the fact that this type is particularly prevalent in elderly patients with underlying disease. 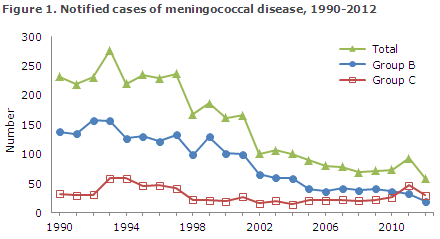