In Denmark, invasive meningococcal disease (MD) is monitored via the Clinical Notification System (Form 1515) and by the Neisseria and Streptococcal Reference Laboratory, which receives meningococcal isolates from the departments of clinical microbiology.

In 2011, the Department of Infectious Disease Epidemiology received 92 notifications concerning patients with invasive MD. A reminder had to be sent out to ensure notification in 28 (30 %) of cases. Table 1 shows the distribution by area. 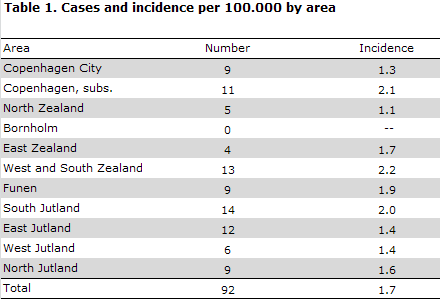 A total of 46 cases (50%) of MD serogroup C were observed along with 32 (35%) serogroup B cases, five (5%) serogroup Y cases and a single case of serogroup W135. No cases of serogroups A og X were reported. In eight cases, the serogroup was unknown; in all these cases, this was due to negative cultures (while PCT, meningococcal antibodies or clinical findings indicated the presence of MD). Distribution by age group is presented in Table 2. 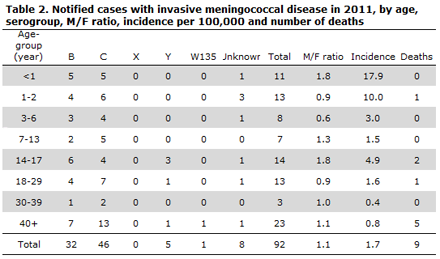 In 72 (78 %) of the notified cases, meningococci were detected by culture; two of these cases were also detected by PCR. In one case, both a positive PCR and microscopy were available. Fourteen cases were only confirmed by PCR, one case only by microscopy and three cases only by meningococcal antibody test. In one case, the diagnosis was based exclusively on clinical observations. A total of 87 cases were presumably infected in Denmark, four cases abroad, and in one case the country of infection was unknown.

Nine patients (10%) died, including five cases with MD of serogroup C, three serogroup B and one serogroup Y case. Four patients had meningitis ,two had septicaemia and three had both meningitis and septicaemia. Among the 83 survivors, information on sequelae was available for 75. A total of 62 (83%) experienced no sequelae. In all, 13 immigrants had the following sequelae: One suffered a cerebral infarction and paresis, six had cognitive sequelae such as difficulty with concentration, three had balance problems, three headaches including one with tinnitus and none with auditory hallucination.

Any physician receiving an MD patient for treatment should immediately notify the case when clinical suspicion arises. Notification is by phone to the Medical Officers of Health in the region where the patient resides and in writing using Form 1515 to Statens Serum Institut, Department of infectious Disease Epidemiology. 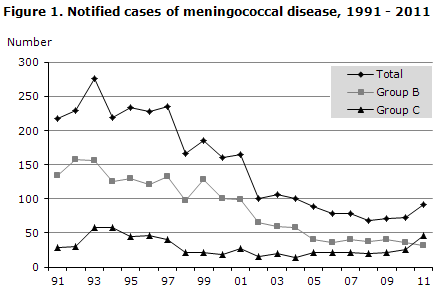 Serogroup C increased from 26 cases in 2010 to 46 in 2011. The Department of Infectious Disease Epidemiology has therefore monitored the occurrence of group C MD particularly intensively since mid 2011.

All meningococcal isolates undergo serotype and sub-serotype determination and, furthermore, the exact type is established. In 2009, 2010 and 2011 an increased occurrence was observed of the C:2a:P1.2.5 type with the exact type C:5.2:F3.3. This type has caused an increased occurrence of serogroup C disease in several European countries, EPI-NEWS 37/11. As per 21 August 2012, serogroup C MD continues to be dominated by this exact type, which caused 88% of the serogroup C cases in 2012 (as opposed to 67% in all of 2011 and 79% in all of 2010). The cases are sporadic and no increased mortality has been observed compared with MD caused by other serotypes.

It currently seems that the number of serogroup C cases will decrease in 2012, as 20 cases had been notified by 12 September. This is in line with the level observed in 2010, when 18 cases had been notified at the same date, while the corresponding number for 2011 was 34. This may mean that the trend has turned. In 2012, however, serogroup C remains the primary cause of MD in Denmark and developments are being monitored closely.