The increase occurred mainly among the 15-19-year-olds and 25-29-year-olds. In the youngest age group, no gonorrhoea cases were detected in 2011. 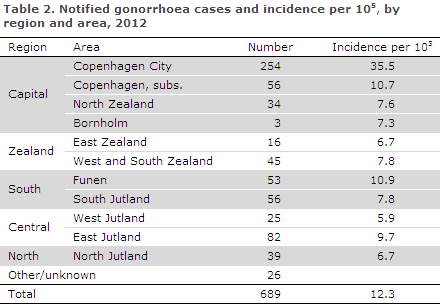 A total of 655 cases in 636 persons were reported to the NSID. Two cases of gonococcal conjunctivitis were reported in neonates, one male and one female case.

In 2012, the reference laboratory received 511 gonococcus isolates from the Danish departments of clinical microbiology (DCMs).

The isolates were tested for fluoroquinolone and ceftriaxone susceptibility and for penicillinase production which indicates that they are highly resistant to penicillin.

Penicillinase production was detected in 17% (21% in 2011). Over the past years, the MIC (minimum inhibitory concentration) for ceftriaxone has followed an increasing trend, Figure 3, but no resistant strains (MIC ≥ 0.25 microgram/mL) have ever been detected. 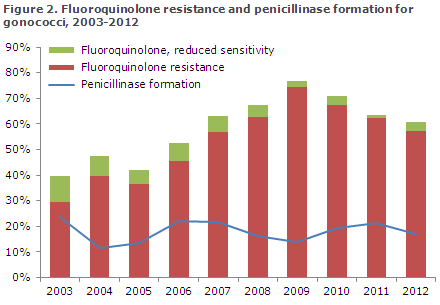 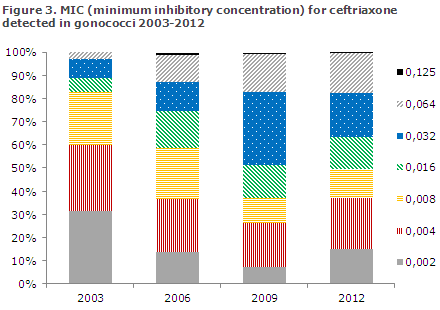 As part of a joint EU project, the reference laboratory tests 50-60 strains against an expanded panel of antibiotics twice a year. In 2012 it was determined that among 112 strains, 88% were sensitive to azithromycin, 89% to cefixime (an oral cephalosporin) and 100% to spectinomycin. None of the two latter are marketed in Denmark. 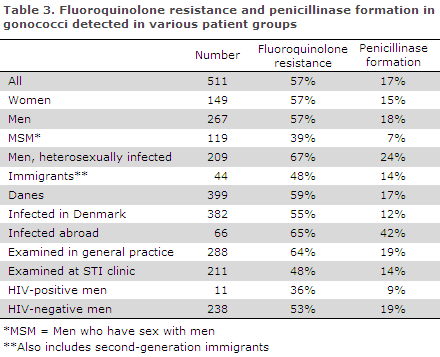 Several reports from abroad have described ceftriaxone treatment failure and detection of ceftriaxone resistant strains. The most recent European guidelines from the IUSTI (International Union against Sexually Transmitted Infections) recommend 500 mg ceftriaxone i.m. and 2 mg azithromycin p.o., both given as a single dose.

Gonorrhoea should not be treated with azithromycin alone. Doses of 1 g carry a considerable risk of treatment failure and development of resistance, while 2 g doses frequently cause adverse gastrointestinal events.

The nation-wide monitoring of gonococcal antimicrobial resistance in Denmark has a high coverage, and neither documented treatment failure nor resistance to ceftriaxone has ever been reported. Until revised Danish guidelines are published, a preliminary solution may be to increase the ceftriaxone dose from 250 mg to 500 mg i. m. in all patients lacking sensitivity testing.

In 2012 a decrease was observed in the proportion of strains with resistance to fluoroquinolones (61% compared with 71% in 2011). In patients with ano-genital infection caused by documented fluoroquinolone-sensitive gonococci, oral ciprofloxacine 500 mg may still be given.

The overall number of reported gonorrhoea cases has increased considerably since 2010, EPI-NEWS 36/12 and 34a/11. The increase, which seems to continue into 2013, is primarily seen among the heterosexually infected individuals, males as well as females.

Both the increasing trend and the observed distribution on sex, age and mode of infection mark a contrast compared to syphilis, which seems not to be increasing and which is mainly observed in MSM. The median age of persons with gonorrhoea is 27 years, which is 11 years less than the median age of those affected by syphilis, EPI-NEWS 34/13.

The increase in the number of reported cases may be due to a real increase in gonorrhoea incidence, increased awareness among patients and/or physicians and changed diagnostic practices. Many DCMs do combined NAAT for Chlamydia trachomatis and gonococci.

The increased use of NAAT may therefore have led to the diagnosis of cases with more silent symptoms, which would not otherwise have raised suspicion of gonorrhoea. Gonococcus-positive patients diagnosed by such testing are encouraged to undergo culture and susceptibility testing.

In 153 cases, the NSID had been notified, but no isolate had been submitted to the reference laboratory. To ensure effective treatment, it is important that changes in resistance are followed continually at the national level via monitoring of the submitted isolates.

If gonococci are diagnosed by NAAT, a culture should subsequently be performed to enable susceptibility testing.
(B. Søborg, S. Cowan, Department of Infectious Disease Epidemiology), J.S. Jensen, S. Hoffmann, Microbiology and Infection Control)