2011 saw 498 cases of gonorrhoea in 490 persons. A total of 400 (80%) were male and 98 (20%) were female cases. The median age was 25 years for females (range: 16-59) and 30 years for males (range:17-72). A total of 318 cases were detected by culture and reported to the Laboratory Notification System (LNS) and also to the Notification System for Infectious Diseases (NSID) at the Department of Infectious Disease Epidemiology. A total of 22 cases were only reported to the LNS, and 158 only to the NSID.

Among the 158 cases not reported to the LNS, the diagnoses were made by DNA detection in 107 (67%) cases. Nearly all of these cases occurred in the City of Copenhagen. The geographical distribution is shown in Table 1. 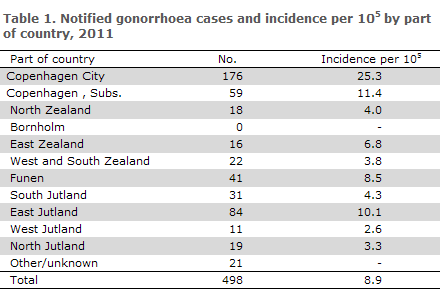 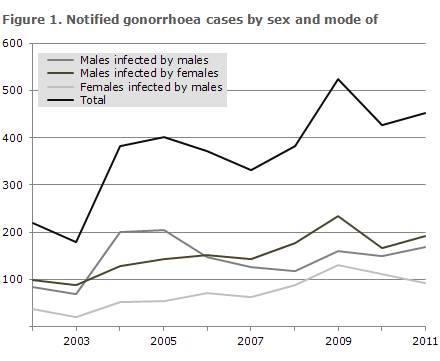 In 2011, the Reference Laboratory received a total of 339 gonococcal isolates from the Danish departments of clinical microbiology. Among these, 178 cases (53%) were reported by general practice and 138 (41%) by STI clinics. The isolates were tested for sensitivity to penicillin, fluoroquinolone and ceftriaxone. Penicillin resistance was found in 46% of the isolates (55% in 2010), and 30% had reduced sensitivity (26% in 2010). A total of 21% were penicillinase-producing (19% in 2010). 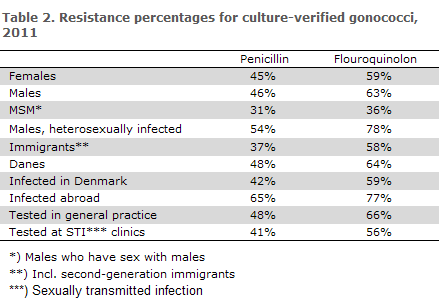 Gonococci were found in synovial fluid in one 34-year-old male.

The overall number of reported gonorrhoea cases was slightly higher in 2011 (498) than in 2010 (484). In contrast, the overall number of culture-confirmed cases was lower in 2011 (339) than in 2010 (370). This difference is probably owed to increased use of DNA detection methods, and to the fact that those who are diagnosed by such detection method are notified. It is, however, unfortunate that DNA detection is performed without accompanying culture in a relatively high number of persons, as this is a prerequisite to determination of resistance.

2011 saw a decrease in the proportion of resistant strains. Thus, only 37% of the strains were fully sensitive to fluoroquinolones; in these patients e.g. ciprofloxacin may be used. Ceftriaxone treatment failure was reported from several countries of the industrialised world along with a high incidence of cefixim (an oral cephalosporine) resistance.

The drug was never marketed in Denmark, but 15% of gonococcus strains found in Denmark are cefixim-resistant. The above-mentioned cases of ceftriaxone treatment failure were associated with pharyngeal gonorrhoea. It is important always to swab the patient's throat when examining for gonorrhoea as this infection, like rectal gonorrhoea, is frequently asymptomatic. Furthermore, control swabs and partner tracing are essential.

To ensure an effective treatment, it is important that developments in resistance are followed continually at the national level via monitoring of the submitted isolates.

If gonococci are diagnosed by DNA detection, a swab should subsequently be performed to determine any resistance. Presently, no reliable methods for molecular biology determination of resistance are available.
(B. Søborg, S. Cowan, Department of infectious Disease Epidemiology, S. Hoffmann, Microbiology and Infection Control)