Transition from paper to electronic notification

Be sure to notify infectious diseases via SIEI2

The 2021/22 influenza season was another extraordinary season, even though it followed a pattern somewhat similar to what we usually see.

In the beginning of the season, nearly no cases of influenza were detected despite the fact that far more people were tested than in previous seasons. It therefore seemed likely that the season would evolve much like the 2020/21 season when influenza was absent.

However, at an unusually late point in the season, starting shortly after 1 February 2022 when the COVID-19 societal restrictions were lifted, influenza suddenly gained ground. Within few weeks, the number of detected cases reached a previously unseen high level. But after appearing suddenly, influenza then also disappeared suddenly.

Even so, the percent positive has remained on a par with that of previous seasons, which indicates that the epidemic, though short, was more intense than is usually the case. The fact that the remaining monitoring systems do not indicate that the epidemic was more comprehensive than those of other seasons may possibly be explained by a preponderance of younger age groups among those infected in this season.

The late-arriving season probably meant that the effect of influenza vaccination had receded considerably when the influenza reached Denmark - particularly among elderly persons. In contrast, the vaccination coverage achieved was the highest ever recorded among elderly people aged 65 years and above, which may have contributed to keeping influenza at bay in the first four months of the season.

Overall, Denmark did not experience the serious double epidemic of COVID-19 and influenza that had caused concern ahead of the season due to the absence of influenza in 2020/21.

This week’s EPI-NEWS summarises the most important details from the year’s influenza season, whereas a more comprehensive description of the influenza occurrence is available in the 2021/22 Annual Report on Influenza.

For this season, Statens Serum Institut has developed an interactive dashboard for influenza surveillance. On the dashboard, you can follow influenza activity all year, and access data from previous seasons.

In the 2021/22 season, the sentinel surveillance system within which general practitioners (GPs) report the share of visits caused by influenza-like illness (ILI) and take samples for laboratory testing from ILI patients was extended to facilitate the recruitment of more physicians for the surveillance efforts and to allow for collection and analysis of more samples per participating physician. The samples are tested for a panel of different airway viruses. Furthermore, the system was extended to cover the full calendar year, see EPI-NEWS 14/2022.

In autumn/winter, the proportion of patients who contacted GPs with ILI generally remained at a low to moderate level. In contrast, in the period from week 9 to week 16, the level was high several times meaning that Denmark experienced a late influenza epidemic, Figure 1. Please note that the consultation percentage is not specific to influenza, and the slight increase observed in autumn may therefore be attributed to an increasing level of COVID-19 in the community. The activity recorded by emergency call service physicians remained low throughout the season, but recorded a slight increase from week 9 to week 17. 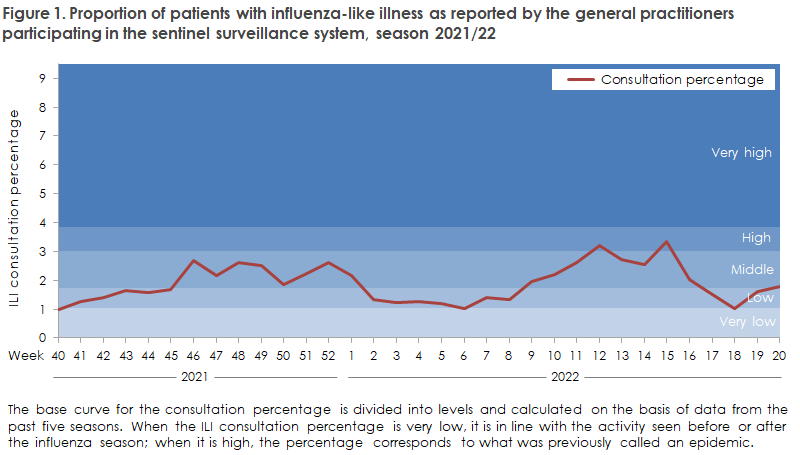 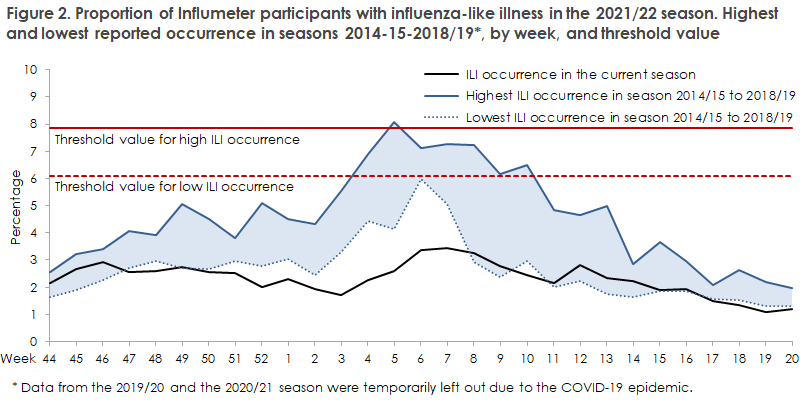 The 2021/22 influenza season was almost exclusively caused by infection with influenza A (H3N2). The entire season was characterised by a high testing activity - higher than ever before recorded.

This may likely be attributed to the increasing use of special tests at the hospitals (the so-called point of care or POC tests), which allow for rapid testing of SARS-CoV-2, influenza and other respiratory viruses.

Thereby, the number of detected cases exceeds those of all previous seasons, apart from the 2017/18 which was matched. However, far more tests were made in 2021/22. The year’s season was also characterised by an unusually late start, and the late transmission coincided with the lifting of the last remaining societal COVID-19 restrictions on 1 February 2022. Subsequently, a steep increase was observed in influenza, after which the epidemic peaked in week 12 with 3,391 confirmed cases, which is the highest ever number of cases recorded in a single week compared with the previous five years. Subsequently, influenza quickly receded again, Figure 4. 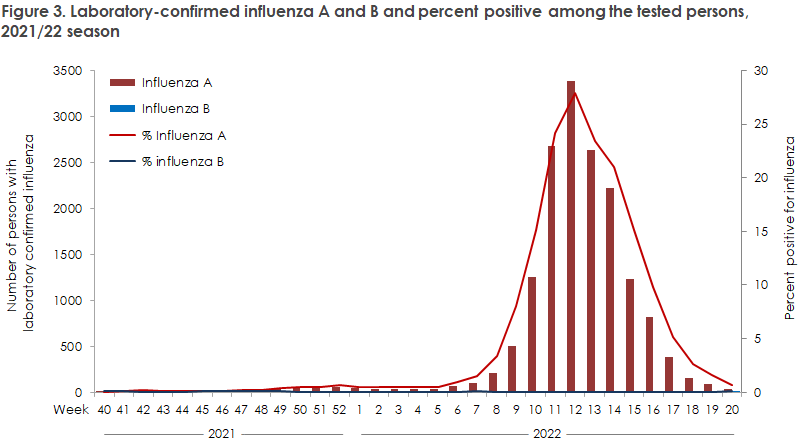 Among the 16,220 confirmed cases, a total of 3,836 (24%) were admitted to hospital with influenza, Table 1, and 232 received intensive care. The admission rate therefore reaches an intermediate level compared with previous seasons; the toughest season being 2017/18 when 47% were admitted and the mildest season being 2018/19 when only 14% were admitted to hospital. A total of 261 influenza-related deaths were recorded, including 236 deaths in patients who had also been admitted to hospital with influenza. With respect to mortality, the 2021/22 season is on a par with previous seasons, but substantially lower than the 2017/18 season. Once more, it is important to take into account the high influenza testing activity in the 2021/22 season.

In the course of the season, the National Danish WHO Influenza Centre at the SSI received a total of 5,295 samples for testing and characterisation of influenza virus. Among the typed samples, nearly all were influenza A virus, and among these the H3N2 subtype comprised 99% and H1N1pdm09 1%. Only three influenza B virus cases were genotyped; all belonged to the Victoria line.

For elderly persons aged 65 years or above, a high coverage exceeding 75% was achieved, whereas the coverage among the younger target groups was somewhat lower, only 25-35%. It should be noted that the coverages of several target groups that cannot be stated by age were based on register data extractions, and therefore the estimated vaccine coverage is associated with some uncertainty.

Transmission of influenza infection from animals to humans

Before 2021, swine influenza had not been detected in humans in Denmark, but sporadic cases have occasionally been reported from other countries. In January 2021, the SSI detected the first known Danish case of swine influenza in a person; and in November 2021, a second case was detected . The cases were unrelated and were detected at a time when common seasonal influenza virus was not circulating. Virus from both of the two patients was of the type influenza A, subtype H1N1, in variants only seen in pigs. The two viruses were, however, genetically different, which means that different viruses were found in the two affected patients. The cases were thoroughly investigated and no signs were found of further transmission to other people. Therefore, the cases were considered sporadic cases.

In 2021, the monitoring of influenza virus in pigs was based on samples from a total of 857 submissions from 647 different farms, which had been sent for diagnostic testing at Danish veterinary laboratories. Typically, 3-5 samples were included in each submission. The submissions were made from all parts of Denmark, and influenza virus was detected in all parts of the year, even though the summer semester recorded fewer submissions and a lower share of positive submissions. A total of 53% of the submissions, corresponding to 377 submissions, tested positive for influenza A virus. All positive samples were tested to determine if they were of the H1pdm subtype, and subtyping of the proteins hemagglutinin (HA) and neuraminidase (NA) was completed for 312 submissions. The most common subtypes detected in Danish pigs were H1avN2sw, H1pdm09N1av and H1N1pdm09. For more information, please see the monitoring page of DK-VET.

Avian influenza in pigs and mammals

The 2021/22 season recorded outbreaks with clade 2.3.4.4b H5 highly pathogenic avian influenza (HPAI) virus in Europe, with extraordinarily many findings in both wild birds and poultry. In Denmark, 11 outbreaks were recorded in poultry flocks following clinical suspicion of HPAI. In the same period, HPAI virus was detected in more than 100 wild birds that were found dead; primarily geese, swans, buzzards and seagulls. Furthermore, HPAI virus was detected in a limited number of cases in apparently healthy wild ducks during the autumn of 2021. The viruses detected in the poultry flocks are the same as those detected in wild birds. Therefore, the virus was probably introduced into the poultry flocks via direct or indirect contact to wild birds. Read more at the website of the Danish Veterinary and Food Administration.

So far, HPAI virus has only rarely been detected in mammals. However, a common seal, which was found dead on a beach on the island of Funen in the autumn of 2021, tested positive to HPAI virus.

That was the first time ever that HPAI virus was detected in a mammal in Denmark. However, in other European countries, this season has brought a number of similar sporadic cases including detection of HPAI virus in seals, foxes and other wild predators.

Avian influenza virus has never been detected in humans in Denmark, but cases have been observed in Asia, in particular, where they have triggered small outbreaks.

Proposal for vaccination and malaria prophylaxis for foreign travel

The SSI website is continuously updated to reflect substantial changes in the risk assessment for each vaccine-preventable disease and to match the need for and level of malaria prophylaxis The primary authoritative source for the updates is the WHO’s recommendations for travel vaccination and malaria prophylaxis and updated information about countries that are associated with a risk of and a requirement for yellow fever vaccination, which is normally updated annually, most recently in the spring of 2021. In line herewith, the SSI travel site has been updated to reflect the latest WHO data. In 2022, the WHO has yet to publish these updates. Once the information is published, the SSI travel site will once again be updated. Even so, some updates have been published concerning requirements or recommendations for polio vaccination, see below.

During the COVID-19 pandemic, the SSI did not publish the traditional overview tables presenting the four travel groups and letter codes for each vaccine, and these will also not be published on the website in future. Instead, please see the travel website, which provides equivalent information on a country-by-country basis, but focuses more extensively on the risk behaviour for each traveller in the recommendations given.

At its latest meeting on 15 June 2022, the WHO Emergency Committee decided that the global polio situation continues to constitute a PHEIC. Overall, 2021 only detected six cases of wild polio virus compared with 140 cases in 2020. With respect to the vaccine-derived polio viruses (VDPV), 2021 detected outbreaks with a total of 621 cases of VDPV2 in 29 countries globally. Since 2016, the number of vaccine-derived polio cases has exceeded the case number for wild polio. The eradication of this polio type is therefore currently more challenging than the eradication of the original wild polio virus.

On 22 June, the authorities of Great Britain reported repeated findings in the period from February to May 2022 of cVDPV2 in environmental samples from a North-East London purification plant, which services a population of approx. 4 million people. No cases of polio-like disease have been detected, probably because polio vaccination protects against this, but the continuous detection of the virus indicates that transmission with this vaccine-derived virus has occurred locally within the area.