Extended sentinel surveillance of influenza, COVID-19 and other airway viruses

Extended sentinel surveillance of influenza, COVID-19 and other airway viruses

In the current influenza season (starting Week 40, 2021), the extended sentinel surveillance of influenza, COVID-19 and other airway viruses became operational; for more information, please see EPI-NEWS 38/21. The extension comprises a considerable upscaling of the number of airway samples collected per season from 1,000 samples per season (from Week 40 through Week 20) to the current 15,000 annual samples from patients with influenza-like illness (ILI patients). Additionally, the surveillance has been extended to comprise all weeks of the year. Finally, we hope to increase the number of general practitioners who participate in the surveillance scheme.

The sentinel surveillance scheme contributes to monitoring the prevalence and type of airway viruses in the community in a stable and systematic manner. The sentinel surveillance is therefore followed closely by the Danish health authorities. “Sentinel” is derived from the Latin word for a sentry and is an international surveillance system recommended by the WHO and the ECDC. The system facilitates the monitoring and sharing of signals allowing us to predict new disease outbreaks and epidemics nationally and internationally alike. In the absence of systematic COVID-19 testing during the currently declining occurrence in 2022, after two years characterised by comprehensive testing, the sentinel surveillance will become a particularly important tool for continued monitoring of the COVID-19 epidemic and for detection of new signals, including the detection of new virus variants.

In connection with the launch of the extended sentinel system in the autumn of 2021, Statens Serum Institut (SSI) invited more general practitioners to participate in the activities. A large number of general practitioners showed a strong interest in participating, and the option to register needed to be shut down as a large number of physicians had registered within a short time span. Even so, we now need more physicians to participate in the surveillance, and it is therefore once again possible to register as a sentinel surveillance participant. Learn how to register here.

The participating general practitioners take and submit swab samples from two ILI patients a week. Additionally, they electronically register the weekly number of ILI patients and the total weekly number of patients in their surgery. Every swab sample is settled by 150 DKK effected once every quarter. The samples are analysed continuously at the SSI, and the results are returned to the participating practices who can therefore remain up to date with the airway viruses circulating in their local communities. Furthermore, results will appear in the MiBa. Finally, the sentinel surveillance will make it possible to monitor regional airway infection trends.

Figure 1 presents the development in detected airway viruses from week to week for all of Denmark since the season started in Week 40, 2021. We draw attention to the high occurrence of metapneumovirus in late 2021, and, subsequently, the steep increase in influenza in February/March 2022. 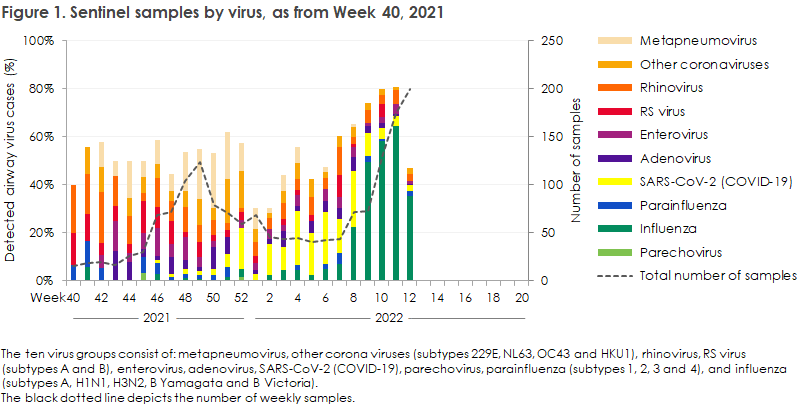 Figure 2 presents the incidence of various airway viruses by region since the beginning of the season in Week 40, 2021. We draw attention to the high level of infection with influenza, COVID-19, metapneumovirus and rhinovirus, but with considerable inter-regional variation.

In relation to the development of influenza infection in the 2021-2022 season, data from the sentinel surveillance confirm what data from the Danish Microbiology Database (MiBa) had previously shown. The samples submitted via the sentinel surveillance revealed a late increase in influenza A from Week 5 and onwards. In line herewith, the MiBa recorded a very low number of infected people in the period from Week 41 through Week 5, a period which normally records a much larger number of influenza cases. Even so, since Week 5 in this season, we have seen weekly doublings of the number of influenza A cases. Week 13 observed a total of 2,556 influenza A cases, and the total number of cases recorded in the entire season was 11,057. The number of influenza B cases has remained low throughout the season. To date, only 78 cases have been detected.

The standardised sentinel surveillance has been operational for 28 years, and therefore it is possible to directly assess the scope and seriousness of the current season by comparing it with previous seasons.

For more weekly data reports from the sentinel surveillance and MiBa data, please see here. On this page you will also find a link to the new influenza dashboard, showing daily reports on influenza A and B, including number of persons tested, positive percentages, confirmed cases, hospitalisations, deaths and vaccination.