To enable specific and targeted vaccination initiatives, the Department of Infectious Disease Epidemiology and Prevention at Statens Serum Institut has studied which groups of children have a lower vaccination coverage in the childhood vaccination programme than same-aged children in the general population.

A study was conducted based on national data from the following registers: the Danish Civil Registration Register (CPR Register), the Danish Vaccination Register (DVR) and data from Statistics Denmark. The study was divided into three sub-studies focusing on the following vaccines; diphtheria-tetanus-whooping cough-haemophilus influenzae type B (DTaP-IPV/Hib) including the five-year booster, measles-mumps-rubella (MMR) and human papilloma virus (HPV) in girls.

The findings show a lower probability for children to be vaccinated if they did not live with any of their parents, attended a special school, attended a private school, were immigrants, had mothers younger than 25 years or older than 34 years when the child was born, had not followed the childhood vaccination programme (i.e. those who had not received the five-year booster), or were children of parents with a low educational level or parents who were non-employed and/or had a low income. For only children, the probability of being vaccinated was higher for the vaccines that are given early in the child’s life (DTaP-IPV/HIB1 and MMR1) than for vaccines given later (HPV).

Small geographical differences and a focus on immigrants

Schools with a low number of 14-year-old girls had a wider range of HPV-vaccination coverage than schools with many girls. Among the schools with the lowest coverage were many anthroposophic schools and international schools.

We recommend a continued focus on reducing the inequality in society in general, as inequality is reflected in the vaccination coverage. Furthermore, we recommend focus on children living away from home, attending special schools and for immigrants in general, but in particular for immigrants from Syria, Poland, Rumania and Greenland. As a minimum, the measures targeting immigrants should comprise comprehensible information about the Danish childhood vaccination programme, specifying that vaccination is free of charge.

The report includes a summary, and summaries of the findings for each vaccine. The report is in Danish and can be found here.

For a detailed epidemiological description of the 2020 incidence, please see the 2020 annual MRSA report. 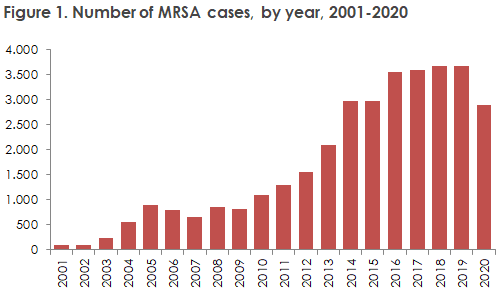 In 351 (12%) cases, MRSA had been acquired abroad, which is considerably lower than in the previous years. Travel activities in Denmark were also heavily reduced due to COVID-19.

Furthermore, at decline was seen in community-acquired MRSA, which may also be explained by reference to restrictions on personal contact, but also by a reduced number of visits to general practitioners.