Three cases of TBE in persons infected in Tisvilde Hegn

In 2019, Tisvilde Hegn and the surrounding areas were identified as a new risk area for tick-borne encephalitis virus (TBEV). In the period from September to June 2019, four patients were diagnosed with TBE after having been bitten with great certainty by TBEV-infected ticks in and around Tisvilde Hegn. In 2019 and 2020, the SSI and the University of Copenhagen have demonstrated the presence of TBEV ticks by “flagging” (drawing a sheet of cloth across the vegetation) at and around a popular natural playground in the north-eastern part of Tisvilde Hegn, EPI-NEWS 25/20.

So far, intensive “flagging” of Tisvilde Hegn has detected TBEV only at the natural playground. On this basis, the authorities decided to close the natural playground in June 2020 so that it could be moved to a presumably TBEV-free area. Following this measure, the period from June to mid-August 2020 brought the detection of three TBE cases in patients who, with great certainty, were bitten by ticks in Tisvilde Hegn and the surrounding areas, but beyond the area where the natural playground is located. The cases include two women and a man who had moved beyond the paths of the area while residing in, staying in a holiday residence and staying in the woods for a brief period of time, respectively.

All cases have been admitted to hospital with typical TBE symptoms of varying severity; and at the time of their diagnosis, all cases had an increased concentration of leucocytes in their spinal fluids. In 2018 and 2019, one of the patients, aged 76 years, had completed a full TBEV vaccination schedule, but even so the patient developed TBE symptoms. The diagnosis was made based on an increasing concentration of TBEV IgG antibodies in convalescent blood samples and by detection of TBEV IgM antibodies in the patient’s spinal fluid, se Table 1. Encephalitis caused by TBEV despite vaccination is described repeatedly in the literature, and the risk seems to rise with increasing age. This observation is one of the reasons why Sweden now recommends adding an extra vaccination to the basic vaccination series for persons aged 50 years or more, see below.

One case of TBE infected on the island of Falster

For the first time ever, TBE was detected on the island of Falster. The patient, a woman in her early 60s residing on Falster, was bitten by a tick in May and approx. 14 days later developed symptoms of meningitis/encephalitis. The concentration of leucocytes was increased in the spinal fluid and TBEV antibodies were detected in blood and spinal fluids alike. The patient regularly visits various woods on Falster, and it is therefore difficult to establish the exact place of infection, Table 1. The patient has not travelled to or visited other known TBEV areas in the incubation period. 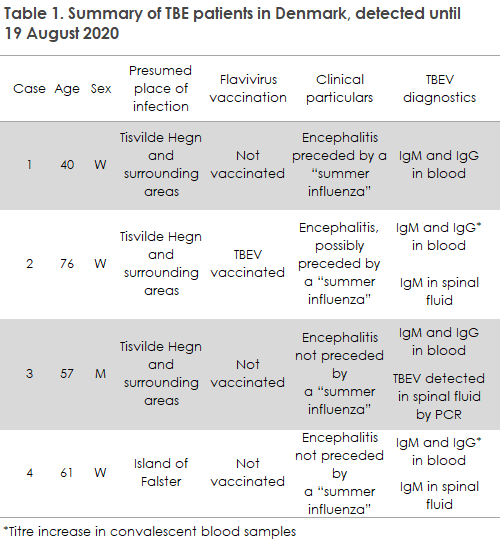 TBE is an inflammation of the brain that may occur following TBEV infection. TBEV is typically transmitted by tick bites, but may also, in rare cases, be transmitted by ingestion of virus-infected, unpasteurised diary products. In the spring of 2020, more than 40 persons in France became infected by TBEV following ingestion of cheese made from raw goat milk from a farm in the Rhône-Alpes region. Similar outbreaks were observed in Finland, but have yet to be described in Denmark.

Infection with the European subtype of TBEV (TBEV-EU) runs an asymptomatic course in approx. 75% of the infectees. In the remaining approx. 25%, a symptom-producing infection is observed, which typically has two phases: Following a 7-14 day incubation period after the tick bite, phase one starts with 2-4 days of fever and uncharacteristic influenza-like symptoms (“summer influenza”).

The latter symptoms frequently recede completely after an additional 1-2 weeks. In approx. one third of cases, the condition progresses to the second phase with symptoms from the nervous system due to lymphocytic meningitis, encephalitis, meningo-encephalitis or meningo-radiculitis. In this phase, the patient will often have formed TBEV-specific antibodies in the blood and spinal fluid. In some patients, the onset is symptoms from the central nervous system with no preceding “summer influenza”. Around 1/3 of the patients with nervous system symptoms may experience sequelae in the form of unilateral paresis and/or cognitive symptoms that are not necessarily permanent.

On clinical suspicion of TBEV infection, the diagnosis may typically be made by detecting TBEV-specific IgM and IgG antibodies in serum using ELISA (enzyme-linked immunosorbent assay). Elevated IgM titres tentatively indicate ongoing or recently surpassed infection. Seroconversion or a significant IgG titre increase in convalescent blood samples confirm and underpin the diagnosis, respectively. The first blood sample should be taken as early as possible in the course of the disease, the second should be taken 1-2 weeks later. It is important to pay attention to the fact that TBEV-vaccinated persons will form TBEV antibodies which can be detected by ELISA and that cross-reactivity may occur with antibodies against other flavivirus (dengue virus, West Nile virus, Japanese encephalitis virus, yellow fever virus - for the two latter, also antibodies due to vaccination against these conditions). Specific IgM antibodies may occasionally be detected in spinal fluid, which underpins the diagnosis. Detection of TBEV antibodies is done at the SSI, Tick-borne encephalitis virus antibodies (IgG, IgM) (R-no. 227).

The risk of being bitten by ticks is higher if you frequently spend time in woods or shrubland beyond existing paths. The risk of tick bites can be reduced by using boots, long trousers and by frequently inspecting and quickly removing any ticks. TBEV is transmitted in close connection with the tick bite (within minutes), as the virus is present in the tick’s salivary glands. Even so, it is important to remove the tick as soon as possible, as the amount of virus transmitted is associated with symptom severity.

In Denmark, the island of Bornholm and Tisvilde Hegn and surrounding areas are currently considered TBE risk areas. Vaccination may be considered in particular for patients who frequently visit these areas and walk beyond the existing paths in the woods and in shrubbery. Typically, such persons will be permanent residents in the areas or persons whose summer residence is located in the areas. Furthermore, vaccination may be considered for persons who are at a particularly high risk of infection and who visit the TBE risk areas regularly, e.g., forestry workers, hunters, orienteers, mushroom and berry pickers, and persons who use the woods as a fixed location for play, sports or other hobby activities. The few sporadic cases of TBE encephalitis in 2018 and 2020 beyond the island of Bornholm and Tisvilde Hegn do not trigger a change in the current Danish TBEV vaccination recommendations, but developments are followed closely.

The SSI stocks two TBE vaccines: TicoVac® 0.5 ml for persons above 16 years of age and TicoVac® Junior 0.25 ml for children from 1 to 16 years of age. According to the TicoVac® summary of product characteristics, two doses are given at a recommended interval of 1-3 months. The third dose is an early booster, which should be given 5-12 months after the second vaccination, if possible immediately before the tick season begins in May. The booster protects the patient for a minimum period of 3 years.

In relation to minimizing the risk of vaccine failure, novel Swedish data, as mentioned above, support giving an extra vaccine dose to persons aged 50 years or more in the basic vaccination programme . This is not yet described in the approved TicoVac® summary of product characteristics and will therefore constitute off-label use of the vaccine, which must rely on a shared decision made together by the doctor and the patient.

TBEV is spreading in Denmark and the rest of Europe

TBEV seems to be spreading geographically in Denmark as well as in the rest of Europe, and we should therefore be prepared to see an increasing number of TBE risk areas (microfoci) across Denmark. Therefore, doctors should be attentive to TBE as a differential diagnosis in all undiagnosed patients with symptoms of viral encephalitis and relevant exposure, regardless of their travel history.