The authorities have therefore recently decided to close the natural playground so that it may be moved to a TBEV-free area of Tisvilde Hegn.

TBE is not a notifiable condition in Denmark, but the diagnostics are centralised to the SSI, and the occurrence has been monitored since 2000. In 2019, a total of 13 cases of presumed TBEV infection were detected, which is the highest number detected to date, Figure 1. 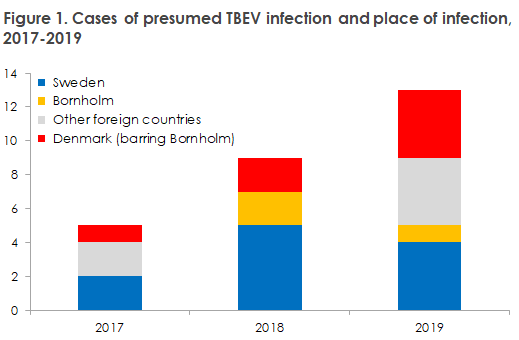 In 2019, for the third time, infection with TBEV, also known as Central European encephalitis, was detected in other Danish areas than Bornholm. In the period from June to September, a total of four persons with great certainty became infected with TBEV from infected ticks in and around Tisvilde Hegn in North Zealand. The affected persons were three men and one woman aged 39-69 years who either resided close to Tisvilde Hegn or used the woods for recreational purposes. All four patients ran a two-phased disease course presenting with fever, fatigue and influenza-like or gastrointestinal symptoms followed by admission due to a clinical presentation similar to that of meningitis or meningo-encephalitis. Several of the patients have experienced sequelae after their infection.

In September 2019, ticks were collected from a small area in the northeastern corner of Tisvilde Hegn. RNA was extracted from the collected ticks and used in a TBEV-specific PCR. In ticks from two of the five collection areas, PCR for TBEV was positive. An additional collection of ticks in October 2019 in a more limited section of the area confirmed the findings, and the ticks in an approx. 20 m broad section along Tisvilde Natural Playground in the northeastern corner of the woods were (as previously mentioned) clearly TBEV positive with an estimated prevalence of 8% (one in every twelve tick nymphs contained TBEV).

Based on these findings, the Ministry of Environment and Food of Denmark and the Municipality of Gribskov in October 2019 decided to put up signs for the users of the natural playground warning them of the risk of tick bites and to remove part of the shrubbery in the area due to the risk of tick-borne TBEV infection.

As presented, TBEV has now once more been detected in ticks from the same area bordering on the natural playground where TBEV-positive ticks were found in 2019.

Vaccination may, in particular, be considered in persons who are living permanently or have a fixed summer residence in TBE areas (risk areas), i.e., Bornholm or Tisvilde Hegn and nearby areas and who regularly leave the paths of woods and scrubland. In known TBE risk areas, vaccination should be considered in cases with behaviour associated with a particularly high risk of infection, such as forestry work, hunting or where the woods are the fixed location for play, sport or hobby activities.

The SSI stocks two TBE vaccines: TicoVac® 0.5 ml for persons above 16 years of age and TicoVac® Junior 0.25 ml for children from 1 to 16 years of age. Initially, two doses are given at a recommended interval of 1-3 months. The third dose is a booster, which should be given 5-12 months after the second vaccination, if possible immediately before the tick season begins in May. The booster protects the patient for a period of 3 years. Subsequent boosters should be given at 3-5-year intervals, see the summary of product characteristics at www.ssi.dk.

In recent years, several of our neighbouring countries (e.g., Sweden and Germany) have reported an increase in TBE incidence and the condition has also spread geographically. Several factors may contribute to the observed changes in TBE epidemiology, including an increasing number of deer, changed behaviour in animals as well as people, and climatic fluctuations.

Doctors are encouraged to be attentive to TBE as a possible diagnosis in cases with relevant symptoms; and not exclusively following stays in Sweden or on Bornholm but particularly following stays in and around Tisvilde Hegn. Furthermore, suspicion of TBE should still be considered in case of relevant clinical symptoms and tick bites following stays in other parts of Denmark, as new TBEV foci may arise and pass with time.