The number of notified, newly diagnosed HIV cases in 2018 was 159. This is a decline compared with 2016 and 2017, when the corresponding figures were 182 and 183, respectively. In the two preceding years, the figures exceeded 200. We therefore have reason to believe that HIV is finally following a decreasing trend. The decline is seen primarily among MSM, Figure 1. 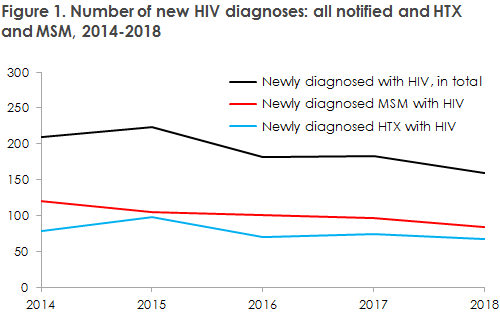 For a detailed epidemiological description of the 2018 incidence, please see the 2018 annual HIV report.

Despite considerable testing activity, not least at the Checkpoints (the Danish AIDS Foundation’s testing sites for MSM and immigrants), a high share of the newly diagnosed cases are tested long after having become infected. For MSM, the corresponding share is 40% and for HTX it is as high as 66%.
MSM should be tested for HIV annually, and MSM who lead an active sex life and do not consistently use a condom should be tested for HIV and other sexually transmitted infections more frequently, e.g. every three months.

The decline in the number of MSM is likely owed to the introduction of free PrEP as well as to the fact that the share of well-treated HIV-positive MSM is increasing.

Even though several biological and technical methods are available supporting the effort to reduce the infection pressure in Denmark, HIV remains shrouded in ignorance and stigma, and stigma has been identified as the cause why persons choose not to be tested despite being aware that they are at risk of being HIV positives. It is more important than ever to endeavour to overcome ignorance and stigma, both in the general population and particularly in the affected communities. It is important that MSM become aware that those who are diagnosed as HIV positives in the vast majority of cases are well treated and therefore constitute no risk for transmission of the infection. The focus needs to be shifted to those who believe that they are HIV negatives, but who have had unprotected sex after their latest HIV negative test, as non-diagnosed HIV-positive people account for the largest share of HIV transmissions in Denmark.

For immigrants who have become infected before arriving to Denmark, the most important measure of secondary prevention is diagnosing the patients as quickly as possible. It is therefore of concern that 60% of the immigrants who were notified as having become infected heterosexually prior to their arrival to Denmark had stayed in Denmark for more than a year before being tested for HIV. The figure was recorded despite the Danish Health Authority’s guideline recommending testing as soon as possible after arriving to Denmark if you arrive from a high-endemic country.

In Denmark, very few HIV positives get AIDS, and the majority of those who do are diagnosed with HIV and AIDS concurrently, showing that they were tested late.

In the 2016-2018 period, HIV-1 from 349 patients was tested for resistance mutations and subtyped via sequencing of the HIV-1 pol gene. Based on these analyses, no significant change in the occurrence of resistance mutations has been observed in the period, either among people infected in Denmark or abroad. In 2018, subtype B remained the most frequently occurring type among all persons diagnosed with HIV-1 in Denmark, whereas the circulating recombinant form (CRF), CFR01, was the most frequently occurring type among people who had become infected abroad.

Additionally, CFR12 was seen for the first time in Denmark, in two patients both of whom had become infected in Denmark.

In 2018, a low level of resistance was observed to both PrEP components in one newly diagnosed patient.

Like last year, the resistance and typing findings presented in this year's annual HIV report include only persons who were diagnosed for the first time. Therefore, the report excludes persons who are known HIV positives because they have been diagnosed abroad. There is a continuous effort to collect and update epidemiological information in between the release of EPI-NEWS reports; and changes to previous data may therefore occur in subsequent publications.