Vaccination with Tetravac in the childhood vaccination programme

As announced in EPI-NEWS 10/19, the Tetravac vaccine must be used as a new booster vaccine in the childhood vaccination programme as from the end of September 2019. Tetravac is equivalent to the previously used booster vaccine DiTeKiPol Booster from AJ Vaccines A/S (previously an SSI vaccine).

There is no change in the normally used settlement code, which remains:
Di-Te-Ki-Pol booster vaccination (one vaccination, normally given at 5 years of age) = 8325

Monitoring of the coverage of the vaccination programme is based on the statutory notification of vaccinations to the Danish Vaccination Register (DVR) through www.fmk-online.dk or via integration of the DVR into the electronic health record system used.

Tetravac is produced by Sanofi Pasteur and is approved by the European Medicines Agency (EMA). Tetravac protects against the following four conditions: diphtheria, tetanus, whooping cough and polio. The antigens are adsorbed on 0.3 mg aluminum hydroxide. Tetravac is identical to Pentavac, with the exception that Pentavac also contains a Hib component that is mixed with the DiTeKiPol component prior to administration.

Tetravac is a so-called high-dose diphtheria vaccine. It may therefore also be used as a primary vaccine in cases in which the Hib component is not relevant. If Tetravac is not used as a primary vaccine, the primary vaccination scheme must comprise a total of three vaccines: 2 doses administered at a minimum 2-month interval and a third dose given at a minimum 6-month interval counted from the latter of the previous vaccines. Subsequently, the first booster vaccine is given after 4 years.

Tetravac is provided as a pre-filled syringe, which must be shaken well before use to obtain a homogeneous milky-white suspension. Pentavac is given by intramuscular injection.

The pattern of adverse reactions for Tetravac does not differ markedly from that of the booster vaccine from AJ Vaccines. Very common (≥ 1/10) adverse reactions include local swelling, pain and erythema at the injection site, malaise and fever ≥ 38 degrees Celsius.

As the vaccine has not previously been used in the Danish childhood vaccination programme, the Danish Medicines Agency has decided that Tetravac is subject to enhanced duty of notification during its introduction into the childhood vaccination programme. Enhanced duty of notification means that doctors are required to report all presumed adverse events in persons they are treating.

The vaccine may be ordered using Form 6 at or by contacting the SSI Order Office (Ordremodtagelsen) ordre@ssi.dk or by phone 3268 3111.

We take this opportunity to remind you of the importance of submitting enterovirus-positive sample material for national enterovirus monitoring to Statens Serum Institut (SSI). We recommend submitting positive stool, spinal fluid and respiratory samples. Respiratory samples are particularly important for the detection of enterovirus D68 (EV-D68), as this type of virus has only been found in stools or spinal fluids in a very limited number of cases.

All countries must have in place a national monitoring system for poliovirus. In some countries - including Denmark - poliovirus monitoring has been extended to include all types of enterovirus. That means that when a patient tests positive to enterovirus, the hospital sends the samples to the Danish WHO reference laboratory for poliovirus at Statens Serum Institut. The SSI then further analyse the the samples using isolation in cells and sequencing. This enables the detection of outbreaks with a specific virus type, the detection of new types, monitoring of virus evolution. Among Danish patients, fever and rash are frequent symptoms, but there are also several cases of meningitis, encephalitis and sepsis. 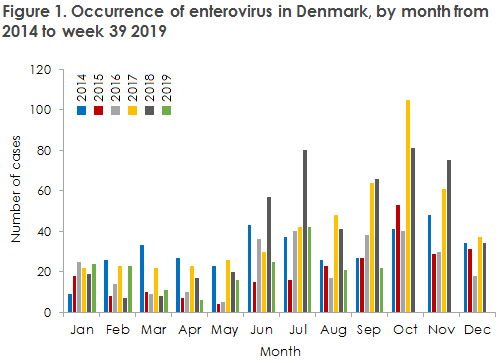 The enterovirus season in Denmark has started, and following two years of increased activity, the activity level for the 2019 season up to and including the month of September is now back to the average, Figure 1. 2017 and 2018 were both characterised by an increased occurrence of enterovirus 30, but this has now returned to its normal level. In August and September, EV-D68 was detected in a total of 3 patients. EV-D68 normally occurs at 2-year intervals and mainly causes respiratory symptoms, but in rare cases it may cause a polio-like condition - AFM/AFP (acute flaccid myelitis/acute flaccid paralysis), particularly in children above 5 years of age. In 2014, this type of virus caused a major outbreak that started in the US and spread across Europe, EPI-NEWS 49/14.

Furthermore, a total of nine cases of enterovirus A71 infection have been detected , with a subtype that has previously caused cases of rhomboencephalitis and encephalitis in Germany, France and Spain, among others.