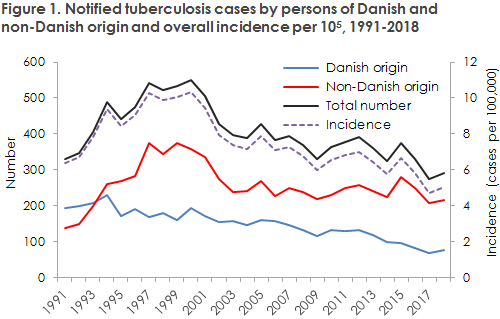 Roughly the same number is expected in 2019. Currently, a total of 174 cases have been notified, including 52 of Danish origin.

For a detailed epidemiological description of the 2018 incidence, please see the 2018 annual TB report.

In 2018 as previously, the highest incidence (8.8 cases per 100,000) was observed in the City of Copenhagen, followed by Copenhagen suburbs, where the incidence also exceeded the national average level (7.3). From 2017 to 2018, a substantial increase has been observed in the Central Denmark Region, primarily due to an increasing incidence in West Jutland among persons of Danish and non-Danish origin alike, including four cases of MDR-TB, see below.

Based on the notifications, more than 40% of the patients had become infected in Denmark. Approx. half of these patients were of Danish and non-Danish origin, respectively. Among 11 children notified with TB, nearly all (81%) had presumably become infected in Denmark. TB was therefore not only due to reactivation of latent TB the patients had acquired before their arrival to Denmark, but was to a considerable extent due to continued transmission in Denmark, which is also documented by the large transmission chain (”Cluster 2/1112-15”) that accounted for 18% of all typed cases in 2018. Greenlanders living in Denmark still have a high TB incidence, whereas the incidence among immigrants from Eritrea has been decreasing.

Among persons of Danish origin, the median the past 10+ years has followed an increasing trend, reflecting that the average age of Danish TB patients is rising. All things being equal, this is a sign that TB in this group can be eliminated in the long term.

The incidence of TB has decreased in Denmark since 2000, recording an average annual 2.5% reduction. Internationally, the 2035 objective is to reduce TB incidence by 90% compared with 2015.

Meeting this objective requires a 4.5% average annual reduction. Therefore, the fight against TB must be intensified in Denmark to reach the objective in time.

In 2018/2019, two large contact tracing studies were conducted based on the risk of infection from a person with infectious TB who was connected to a hospital and a school, respectively. At Aalborg

University Hospital, a total of 871 patients or employees were tested, and 41 (approx. 5%) had latent (sleeping) TB infection detected, whereas no cases of active tuberculosis were detected. At Haslev School, a total of 125 children and adults (and six family members) were tested, and a total of 21 (17%) presented with signs of latent TB infection. Furthermore, active TB was detected in four pupils and one teacher (4%). In the patient’s family, one additional case of TB was detected in a child below five years of age, whereas all other members of the family had latent infection.

The main difference in the share of infected people in the two environments may probably be explained by a closer and much more prolonged contact in the school environment than was the case for the contact between hospital staff and patient. Furthermore, the high share who developed active TB in the school/family environment may possibly be explained by a particularly heavy exposure (combined frequent cough, high bacterial load and prolonged period of exposure) in the family and among the 15-17-year-old pupils and their teachers. Furthermore, it is known that children, below five years of age in particular, carry an increased risk of progressing from latent to active TB. Early diagnostics of possible TB is therefore of great importance to limit the spreading of infection.

Fewer cases of infectious TB, but continued need to be attentive to multi-drug resistance

Compared with 2017, 2018 witnessed a decline in the share of microscopy-positive pulmonary TB and thereby a decline in the share of infectious pulmonary TB among all notified TB cases. The decline was seen among Danes, from 54% to 48%, whereas the share observed among immigrants remained unchanged at 48%. The decrease may reflect that TB patients are diagnosed earlier in their disease course, which may be associated with a more active screening effort in the risk groups, particularly in the Copenhagen area. In any case, this trend is encouraging as a more rapid diagnosis potentially equals fewer complications for the individual TB patient and less spreading of the infection to the benefit of society.

Four cases of multi-drug resistance (MDR) were detected, corresponding to 3% of the culture-verified cases. Four cases formed part of the same chain of infection, both with respect to genotype and epidemiologically, and were also identical to a strain isolated in 2010 that had not previously been detected in Denmark. It is worrying that multi-drug resistant TB strains are spreading in Denmark, however this is currently only seen to a limited extent.