In 2017, Denmark saw a total of 275 notified cases of tuberculosis (TB). This is the lowest number observed since the mid-1980s when about 300 cases were detected. The incidence of TB has followed a declining trend since 2001, and following minor peaks in 2012 and 2015, a particularly strong decline has been seen in the past two years, Figure 1. 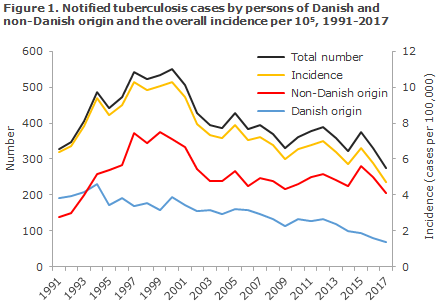 For a detailed epidemiological description of the 2017 incidence, please see the 2017 annual TB report.

For many years, the fight against tuberculosis in Denmark has been based on passive case finding and active infection tracing among contacts to detected cases and, if any, the identified source of infection (index case). In recent years, active case finding has been performed successfully in risk environments, particularly in Copenhagen, where a very high share of patients with active TB has been found, EPI-NEWS 51a/12 and 12/13.

Among others, the programme points out that the efforts made to identify active TB cases among asylum seekers, quota refugees and family-re-united people needs to be strengthened and aligned.

However, cases of latent TB are also important to identify as preventive care can considerably reduce the risk of progression into active TB. Therefore, the chapters on methods used for detection of latent TB and on preventive treatment have also been thoroughly revised.

The chapter on diagnostics has also been revised extensively. In cases of suspected TB, microscopy and cultivation are performed at the Department of Tuberculosis and Mycobacteria at Statens Serum Institut (SSI). One PCR test for M. tuberculosis is automatically added for any new patients. This PCR analysis comprises rapid genotypic resistance determination for the two primary TB medications: isoniazid and rifampin. Microscopy-positive samples that test negative to M. tuberculosis by PCR immediately undergo PCR testing for atypical mycobacteria. These changes have brought a more rapid determination of infection type and resistance, which allows for a more swift initiation of correct treatment, whereby spreading of the infection is reduced.

In addition, the principles guiding the treatment of susceptible and resistant TB have been updated. Additionally, the programme deals specifically with TB of the central nervous system and TB in children, including considerations relating to BCG vaccination of children. Finally, the chapter on infectious hygiene precautions for TB has also been updated.

In 2017, three times as many Danish male as female cases were recorded. The continued spread of infection has been demonstrated in special risk environments, EPI-NEW 50/16 and 3/18, and the incidence of TB has been increased for many years, particularly in middle-aged Danes. Figure 2 presents the TB incidence among Danish men aged 25 years or more in the period from 1995 to 2017, divided into 5-year-periods (the latest is only a 3-year-period). 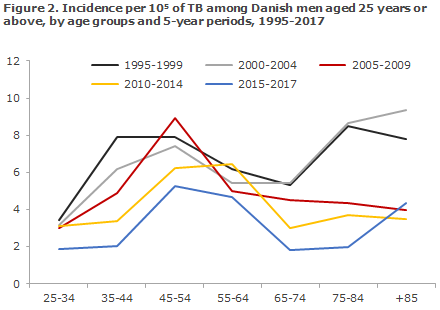 In addition to the decrease in TB incidence in each 5-year period over time, it also seems that the age for the highest incidence has moved upwards over time from 35-55 years in the period from 1995 to 1999 to 45-54 years in the remaining periods, apart from the 2010-2014-period when the highest incidence was seen in the 55-64-year age group. This suggests that TB predominantly keeps occurring in the same risk group of Danish men as they get older.

Furthermore, a decline is seen in the TB incidence diagnosed among elderly Danish men above 65 years of age in the period from 2005 to 2017 compared with 1995-2004. This suggests that we are seeing a decline in the number of men infected with TB in their youth and in whom the condition only presents or becomes reactivated at an elevated age.

This trend is positive, but to reach the long-term WHO objective of eliminating TB in Denmark and the rest of the world by 2050 at the latest, we need to enhance TB control among ethnic Danes, including active case finding/screening in risk groups also beyond the Copenhagen area, and among persons of non-Danish origin who come to Denmark from high TB-incidence areas either as asylum seekers, fugitives, migrants or to achieve family re-unification.

In this context, it is encouraging that in 2017, Danish Red Cross revised its strategy for screening of asylum-seekers in collaboration with TB experts to make screening even more effective. In contrast, it is worrying that municipalities are no longer obligated to offer a health screening to identify infectious diseases, including TB, to people moving into their area who are not covered by the asylum system but who, nevertheless, have an increased risk of TB. The low TB incidence in the mid-1980s and the subsequent increase in the number of cases indicates that it is important to have in place permanent measures as the condition will otherwise tend to return as soon as efforts are relaxed.

Compared with 2016, EPI-NEWS 3/18, 2017 witnessed a decline in the share of microscopy-positive pulmonary TB and thereby a decline in the share of infectious pulmonary TB among Danes as well as among immigrants. The greatest decline was seen among Danes, 72% to 54%, whereas the share decreased from 52% to 47% among immigrants. The decrease reflects that TB patients are diagnosed earlier in their disease course, which may be associated with a more active screening effort in the risk groups, particularly in the Copenhagen area. In any case, the trend is encouraging as a more rapid diagnosis potentially equals fewer complications for the individual TB patient and less spreading of the infection to the benefit of society. It is also positive that in 2017 isoniazid mono-resistance was detected in only three patients, which is below the usual level, and that MDR-TB was seen in only two patients as previous years have seen an increasing trend in the number of MDR-TB cases. It should be noted, however, that at present four MDR-TB cases have been detected in 2018, of which three Danes form part of the same transmission chain. This illustrates just how quickly the situation can change.

Typing of bacteria from the culture-positive patients in 2017 shows that a single chain of infection ”C2/1112-15” still dominates, accounting for 18% of all typed cases in Denmark, compared with 16% in 2016. Furthermore, it is clear that the share of patients of non-Danish origin in this chain of infection, which was previously all Danish, continues to rise and is approaching 50%. This chain of infection therefore still demands considerable attention as it is the largest recorded in Scandinavia to date.

This year’s hot summer has led to bathing water temperatures exceeding 20˚ Celsius at several Danish coasts. The high temperatures allow for increased growth of the so-called marine bacteria, particularly in inland waters where salinity is lower.

Marine bacteria is an umbrella term for vibrio and schewanella bacteria found in seawater, some of which may be pathogenic in humans (EPI-NEWS 18-19/08).

The European Centre for Disease Prevention and Control (ECDC) has developed a mathematical model that assesses the risk of occurrence of marine bacteria in the North-European waters based on water temperature and salinity (Vibrio Map Viewer). In the course of the summer, the risk of growth of vibrio bacteria has been assessed to be mean to high along most Danish coasts, barring North Sea coasts.

Marine bacteria infections are rare, but may present as wound and ear infections typically caused by S. algae, V. alginolyticus, V. parahaemolyticus, V. cholerae or V. vulnificus. The infections are usually benign and typically do not require systemic antibiotic treatment. In some cases, more serious skin infections with V. vulnificus are observed that carry a risk of secondary spreading to the bloodstream, particularly in persons with a weakened immune immune system. These infections may carry a high mortality.

People who have a weakened immune system and who have skin wounds must therefore be cautious when bathing in seawater, particularly when seawater temperatures are high. Furthermore, doctors should be particularly attentive to testing for marine bacteria when treating wound infections in immunocompromised persons who have engaged in bathing. On suspicion of marine bacteria infections, relevant sample material should be submitted to the local department of microbiology, as usual, preferably with a note saying “obs. marine bacteria”.

The ECDC, the European Centre for Disease Prevention and Control, has reported an unusually high number of local cases of West Nile Fever in several countries in Central and South Europe during the summer period of 2018. Travellers to the affected areas are advised to protect themselves against mosquito bites, and clinicians need to consider the diagnosis in returning travellers with febrile illness.

The ECDC has recently issued a warning of an unusually high number of cases of West Nile Fever in the summer of 2018 in several countries in Central and South Europe.
By 9 August, 335 confirmed or probable local cases of West Nile Fever had been detected in the following countries: Italy 123, Serbia 102, Greece 59, Romania 23, Hungary 23 France 3, and Kosovo 2 (see Figure 3). 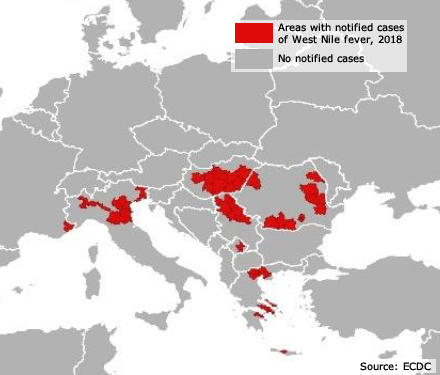 In comparison, during the same summer period in the years 2014-2017, only 5-45 cases per year were reported. Furthermore, the European West Nile Fever season started a few weeks earlier in 2018 than normally. 64 areas within the countries listed above are affected. This includes 13 areas that have not seen any West Nile Fever cases in the 2014-2017 period.

The median age of the reported cases is 64 years. Twice as many male as female cases have been recorded. So far, 17 deaths have been reported in 2018: 9 in Serbia, 3 in Greece, 3 in Italy, 1 in Kosovo and 1 in Romania.

Taken together, the many cases of West Nile Fever reported in 2018 suggests a considerably higher disease burden and therefore a higher infection risk than normally. Additional cases can be expected in coming weeks and months.

West Nile Fever is mainly transmitted via Culex mosquito bites, the common biting mosquito. Travellers to the affected areas should protect themselves against mosquito bites, for instance by covering their skin and using mosquito repellents.

It is important that clinicians consider West Nile Fever as a possible differential diagnosis in relevant patients returning from travel in the affected areas. West Nile Fever mainly occurs during summer and early autumn. Around 80% of those infected do not present with any symptoms. The majority of clinical cases present after an incubation period of 3-14-days with general malaise, fever and headache. About half of the patients develop a skin rash. The symptoms typically last for 3-6 days. Less than 1% have more serious neuro-invasive disease, typically in the form of encephalitis.

Elderly and immunocompromised persons, in particular, are at risk of developing serious disease and may in rare cases die from West Nile Fver.

For more information about the current situation, please see the ECDC’s website.