The difference in median age reflects the fact that TB is observed mainly in middle-aged and elderly persons of Danish origin, whereas the condition is mainly seen in the young and younger adults of non-Danish origin, Figure 1. 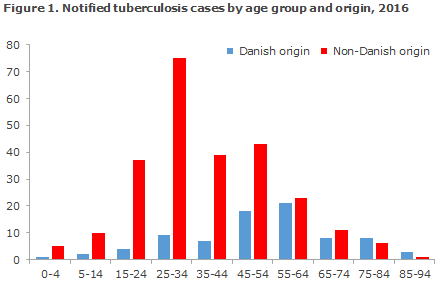 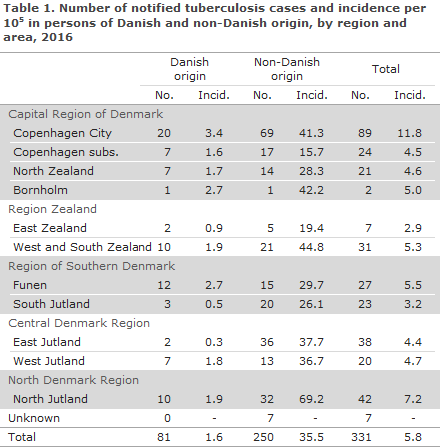 As previously, the highest incidence (11.8 cases per 100,000) was seen in the City of Copenhagen, corresponding to 27% of all detected tuberculosis cases.

Figure 2 presents the development in the TB incidence in persons of Danish origin, by region, in the 2011-2016 period. 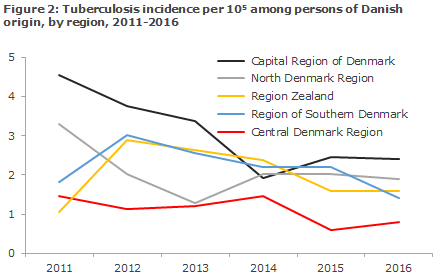 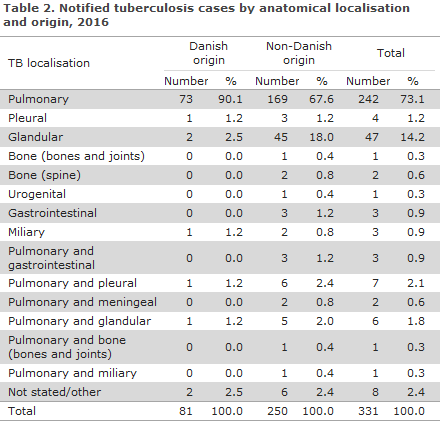 A total of 38 (11%) patients were notified with TB recurrence, including 10 Greenlanders, nine Danes, two persons from Eritrea, Somalia and Afghanistan, respectively, and the remaining 13 patients from 13 different countries, primarily from Asia and The Middle East. In nine (24%) of the 38 patients, the previous TB episode had occurred within the past five years. Three of these mine patients had completed TB treatment. For the remaining six patients, the information about the outcome of their TB treatment was unknown, either because no treatment form had been received after the previous TB episode, or because the patient had received treatment abroad.

For a total of 15 patients (4.5%), five Danes and 10 of non-Danish origin, the notification informed of homelessness, alcoholism or other contact to a risk environment. As previously, it is estimated that this risk factor is under-reported in the notifications.

Information about concurrent HIV infection and therefore AIDS was provided in nine (2.7%) cases, two Danish and seven persons of non-Danish origin. In all, 141 of 331 patients had tested HIV negative, whereas the HIV status of the remaining 181 patients was not stated on the notifications, and therefore remained unknown.

For a single patient, it was stated that the patient was immunosuppressed iatrogenically due to treatment with immunosuppressant medication following a kidney transplant.

2016 saw a total of 52 notified cases of TB in Greenlanders. This was a decline from 65 cases compared with 2015, but Greenlanders in Denmark remain having the highest number of TB cases, among persons of non-Danish origin. The majority of cases were notified from the City of Copenhagen (16), East Jutland (10), South Jutland (8) or North Jutland (7). A total of 28 TB cases were notified among persons from Eritrea. Figure 3 shows the TB incidence for selected countries of origin. 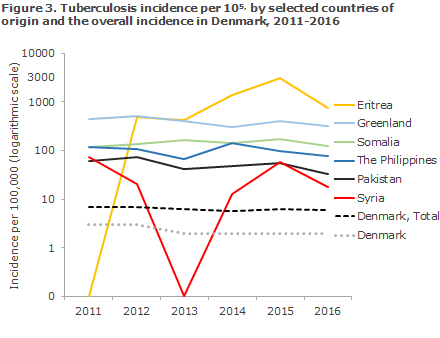 Furthermore, 11 of the 12 children who had been born in Denmark had presumably become infected in Denmark. Three were of Danish origin, while the other children were from Somalia (3), Afghanistan (2), Djibouti, Ghana, Bosnia and Greenland, respectively.

The remaining six children were born abroad and all had probably become infected before their arrival to Denmark. Their countries of origin were as follows: Afghanistan, Cambodia, Ethiopia, Kenya, Syria and Vietnam.

For the remaining nine, there was no information about the source of the infection.

In October 2017, The Danish Paediatric Society published a Guideline on Diagnostics and Treatment of Tuberculosis in Children and adolescents.

In six cases, infection had possibly occurred in relation to occupational activity:

Two were reported to have become infected via their work in healthcare. Neither of the two had TB bacterial growth, but their diagnosis was maintained based on x-ray changes and clinical findings. Therefore, potential occupational infection could not be substantiated any further.

One had previously worked in healthcare, but could also have become infected during one of many previous travels. A positive PCR test but no growth of TB bacteria was reported and genotyping therefore was not possible, and any occupational infection could not be further determined.

One person, a construction worker, was believed to have become infected by a work colleague. Genotyping showed that they had identical types, why occupational infection was likely.

One was believed to have become infected by a work colleague at a pharmacy. Years previously, the colleague had been diagnosed with TB. Genotyping revealed that their types were identical, why occupational infection was likely.

Finally, one person believed having been infected occupationally in the educational sector where a student had been diagnosed with the same type. Both belonged to the infection chain "C2/1112-15" (formerly "cluster 2"), which is the largest chain of transmission in Denmark. Occupational infection is therefore possible, but could not be clarified any further.

In 2016, the TB diagnosis was confirmed by culture with subsequent species determination in 257 of the 331 (78%) notified cases, including 60 of 81 (74%) cases in Danes and 197 of 250 (79%) cases in immigrants. In two, the disease was caused by Mycobacterium bovis; the rest had classic Mycobacterium tuberculosis.

Among the 74 cases that were not confirmed by culture, four (5%) had a positive PCR test performed at the Statens Serum Institut (SSI). Two of these cases had been performed on paraffin-fixed (dead) tissue, why the sample in question had not been cultured. The remaining two PCR positive cases were culture-negative, but one was positive by microscopy. Negative culture despite positive PCR and/or microscopy may be due to patients having been started on anti-tuberculosis treatment before the culture samples were taken.

Drug susceptibility testing results were available for all 257 culture-verified cases.

Tuberculosis trends in Denmark and in other Nordic countries 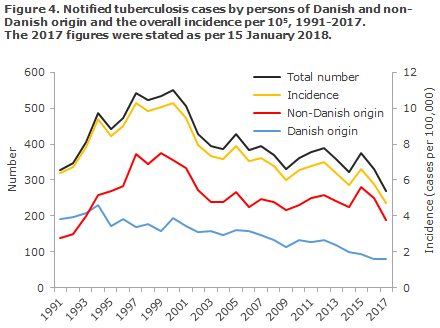 A recently published scientific article demonstrated that the tuberculosis incidence declined by a mean annual 2.4% among persons of Danish origin in the period from 1990 to 2015. In Sweden, the corresponding annual decline was 6.1%; in Finland, the annual decline was 6.9%, Figure 5. Compared with Sweden and Finland, Denmark is lagging behind in the fight against tuberculosis among ethnic Danes in Denmark compared with ethnic Swedes and Finns in Sweden and Finland, respectively. Following the current trend, Denmark will eradicate tuberculosis among native-born Danes around 20 years later than Finland.

The article also shows that there are considerable differences in the age distribution among the native-born cases of tuberculosis in the three countries. In Sweden, and particularly in Finland, the majority of those infected are older than 65 years of age, whereas the Danish patients are younger, Figure 6. This suggests that the current spread of the infection is larger in Denmark than in the two other countries, where the age distribution indicates that the infection has typically occurred a long time ago. 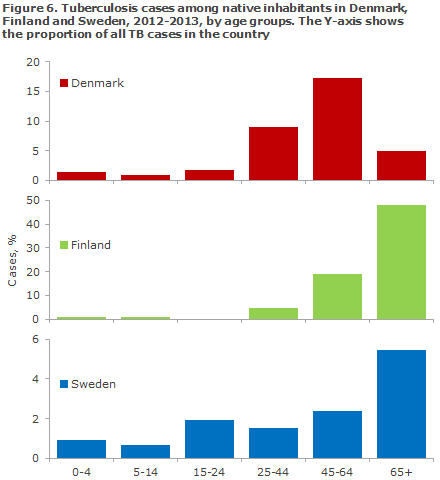 Despite that the number of tuberculosis cases has declined once again in 2016 (and likely also will in 2017) after increasing in 2015, several conditions are threatening the WHO’s long-term objective of eliminating TB by 2050. The share of ethnic Danes with TB is declining, but not to the same extent as seen in two of the other Nordic countries; Finland and Sweden.

Nearly half (45%) of all notified TB patients in 2016 had become infected in Denmark according to their notification. Furthermore, the systematic typing of bacteria from culture-positive TB patients from 1992 onwards has demonstrated that a single chain of infection, "C2/1112-15" (previously “cluster 2”), continues to grow, thereby documenting continued transmission in Denmark, EPI-NEWS 50/16.

Among the culture-positive patients in 2016, 34% of the Danes, 28% of the Greenlanders and 10% of the patients of other ethnic origin belonged to this chain of infection, which is by far the largest infectious chain in Scandinavia. So far, a total of more than 1,100 cases have been recorded as from 1992. Thanks to active screening, some patients belonging to the C2/1112-15 chain (and other chains of infection) are detected every year in Copenhagen, but systematic screening is still not in place beyond Copenhagen, where approx. 60% of all TB patients reside.

Since 2010, we have observed a slight trend towards a decrease in the number of C2/1112-15 patients, Figure 7, mainly in the Capital Region of Denmark. 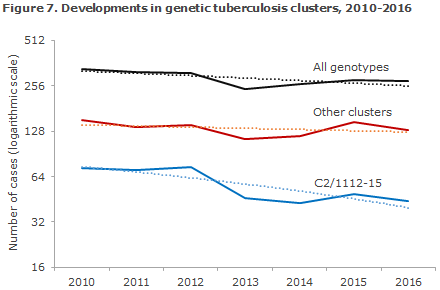 This may be a sign that we are starting to see the effect of active infection tracing, performed in Copenhagen, but it is currently premature to conclude firmly in this regard.

In countries that are in the TB pre-elimination phase, the ratio of child to adult TB cases is a marker for infection spreading, as children will always have become infected recently. The number of TB cases in children seems to have stagnated, and it is worrying that nearly all children with TB born in Denmark are assessed to have become infected in Denmark. In principle, children should not be exposed to TB infection in Denmark, and all pediatricians and GPs are encouraged to be attentive to whether children born in TB risk environments in Denmark should possibly be offered BCG vaccination. This applies to certain children born by ethnic Danish parents and to children born by parents from high TB incidence countries if TB is observed in the family, EPI-NEWS 27a/17.

Finally, the number of persons with TB of non-Danish origin has not been declining since the beginning of the 2000s. This means that it is still important to ensure effective screening of fugitives, migrants and family-reunified persons from high TB incidence areas against active TB. Furthermore, it is also important to consider screening of younger individuals, in particular those with a non-Danish origin, for latent TB in order to offer preventive treatment. In low-incidence countries that are in the pre-elimination phase, the WHO recommends an increased focus on latent TB in the effort to reduce the “pool” of persons who may subsequently get active TB.

The SSI has introduced a more expedient diagnostic flow to identify patients who have resistant tuberculosis as rapidly as possible. A PCR test is performed on a sample from every new patient to establish if there are any tuberculosis bacteria, and genotypic susceptibility testing is performed for isoniazid and rifampicin. It is important that the resistant cases are diagnosed as early as possible in the course of the disease to avoid incorrect treatment, unnecessary complications and an increased risk for further development of resistance for the affected people and unnecessary spreading of resistant strains in the community.