Acute and chronic hepatitis B 2016

Acute and chronic hepatitis B 2016

In 2016, the Department of Infectious Epidemiology and Prevention received notification of a total of 262 cases of chronic hepatitis B, Table 1. 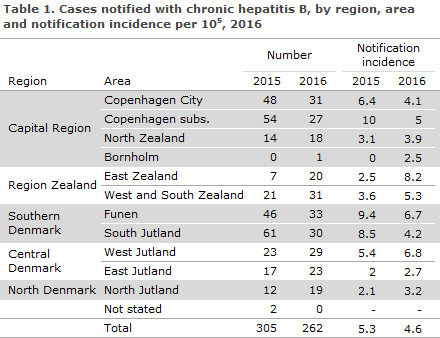 The majority, 252 (96%), were of foreign origin, including seven adopted children as well as five second-generation immigrants infected at birth in Denmark before the introduction of the general screening of pregnant women.

Ten (4%) were of Danish origin. The notified persons of foreign origin were distributed on a total of 49 countries, including 82 persons (32%) from The Middle East. One child was notified as having been infected at birth in Syria.

Because of the general screening of pregnant women, women predominated among the notified cases of foreign origin, Figure 1. Particularly women from South-East Asia and Eastern Europe were over-represented relative to men, as they comprised 75% and 71%, respectively. In addition to the regions of origin presented in Figure 1, eight of the notified persons were from the Indian subcontinent, two were from Western Europe, two were from Greenland and one from Brazil. 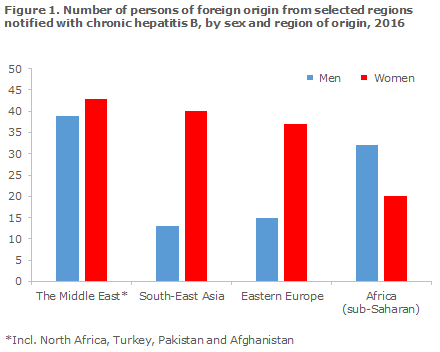 Six people had become infected via sexual contact, one in Denmark, the rest abroad. None were notified as having been infected by tattooing or through close social contact.

Five persons were infected by IV drug use, including three in Denmark, one in Vietnam and one in Syria.

Nine were notified as having been infected nosocomially, seven from Eastern Europe, one from Myanmar and one from Germany. All had become infected before their arrival to Denmark. For 103 persons, no source of infection was provided.

The number of notified cases of acute hepatitis B remains low, Figure 2. The majority of those for whom the mode of infection was known were infected by sexual contact. Although the hepatitis B incidence is low in Denmark, it remains important to consider vaccination prior to travels to high-endemic countries if unprotected sex with someone from that area is a possibility. 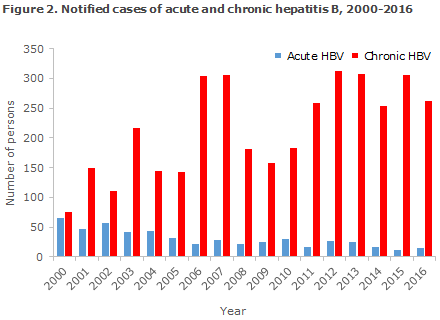 Despite an increase in the inflow of immigrants, we have still not observed any increase in the number of notified cases. Nevertheless, a shift has been observed in the region from which chronic hepatitis B is most frequently imported. Previously, the notified cases were primarily from South-East Asia and Sub-Saharan Africa, but now the Middle-East is the most frequent region. In particular, it is noted that 2016 saw the notification of two children born in Syria, which previously had a well-functioning vaccination programme. The programme has now collapsed and more hepatitis B positive children may therefore be expected from Syria.

Testing persons from high-endemic countries is still recommended, regardless of their sex. Testing should be done at their first contact with Danish healthcare. This recommendation includes adoptees.

Furthermore, we encourage that, whenever a person tests positive for hepatitis B, the person’s sexual partner and children should also be tested. The guideline from the Danish Health Authority recommends vaccination of exposed person groups, household members of hepatitis B carriers and IV drug users; the latter groups following hepatitis B work-up.

In 2016, a total of 94 pregnant women were notified with hepatitis B. No children were notified as having been infected at birth in Denmark. Thanks to the screening of pregnant women for hepatitis B, every year a considerable number of asymptomatic carriers are detected who must be referred to a specialist department (infectious medicine or hepatology) for further work-up, control and treatment, if relevant. This is important, not least because today it is possible to treat pregnant women with a high viral load who would otherwise risk inter-uterine infection of their child.

Children born by hepatitis B positive mothers shall be given immunoglobulin and vaccine at birth (so-called post-exposure vaccination) and when they are 1 month (e.g. at the 5-week examination), 2 months and 12 months old to reduce their risk of mother-to-child transmission during labour.

As post-exposure vaccination does not guarantee that mother-to-child transmission is avoided during labour, the children shall be tested to determine if the vaccine has taken 1-2 months after they have completed their hepatitis B vaccination. A blood sample is taken to establish anti-HBsAg, HBsAg and anti HBc. This is done at the child's GP.

In 2016, only five persons were notified with chronic hepatitis B who had become infected by IV drug use, compared with 22 notified persons in 2015. Routine testing of IV drug users is still needed to offer control and treatment of hepatitis B in this group.