Current state of the 2016/17 influenza season

Recent weeks have seen a steady increase in the number of confirmed influenza cases and the number of patients admitted to hospital who have had influenza infection confirmed. Several hospitals have reported increased stress due to influenza. However, only a limited increase has been observed in the share of patients who contact their GP with influenza-like symptoms. Data from the monitoring performed by Statens Serum Institut (SSI) are updated every Tuesday.

In Europe and Denmark, the influenza virus started circulating already in mid December. Across Europe, the dominant virus is influenza A (H3N2). This influenza subtype is known to cause serious complications among the elderly, and hence H3N2 seasons are often marked by increased workloads at hospitals due to a high number of admissions, possibly in conjunction with staff sickness absence. Excess mortality is also seen frequently, particularly among older people aged 65 years or more.

As from Week 40 2016 through Week 4 2017, a total of 1,827 people have had influenza confirmed in Denmark, Figure 1, 930 of whom have been admitted to hospital, Figure 2, and 55 of the admitted persons have received intensive care. For comparison, last year’s full season recorded a total of 2,825 who were admitted and in whom influenza was detected.

A total 320 of these patients received intensive care. So far, the highest weekly number of hospitalised influenza patients has been 176, compared with 313 last year, Figure 2. However, the SSI’s registration of influenza admissions may carry a few weeks of delay. Among all detected cases in the present season (N = 1,864), 37% were from the age group 65 years or above. For comparison, only 22% of the previous season’s total number of cases (N = 5,152) were from this age group. 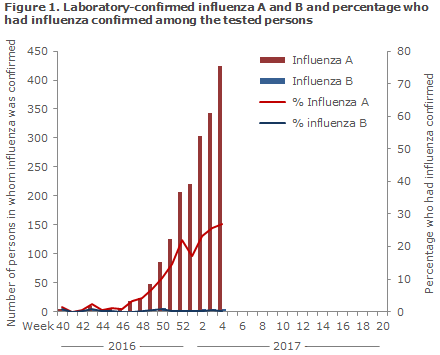 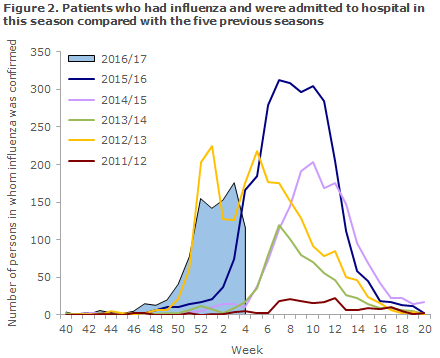 Monitoring of mortality from influenza in Denmark and Europe

Influenza severity may also be monitored indirectly through collection of population mortality data. Since 2009, the Department of Infectious Epidemiology and Prevention at the SSI has continually received data on deaths reported to the Danish Central Person Register. The expected number of deaths is determined on the basis of the historically observed number of deaths per week, and excess mortality is estimated as the calculated deviation from the expected level for the period. A more detailed description of the method and the SSI’s experiences was described in EPI-NEWS 7-8/11 and EPI-NEWS 49/16.

The SSI also monitors mortality in Europe through the joint European programme, EuroMOMO (www.euromomo.eu). On a weekly basis and in the same manner, the programme collects information about mortality for approx. 20 European countries, analyses these data using the same statistical model and shares the weekly mortality curves with the participating countries’ health authorities.

Figure 3 presents the mortality in Denmark in the present 2016/17 influenza season and the previous five seasons. The mortality seems to have increased slightly among the elderly in recent weeks and this is probably due to influenza. 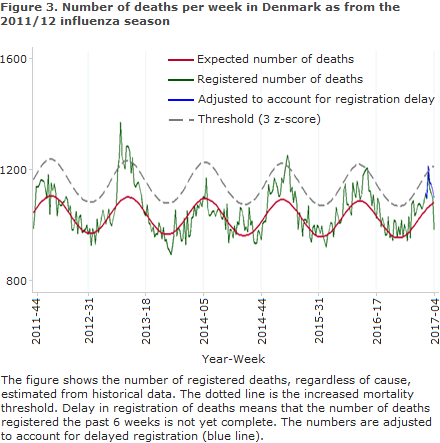 In Europe there is widespread influenza activity, and considerable excess mortality has been detected in the past 4-5 weeks, Figure 4, particularly in a number of countries in Southern Europe, including Portugal, Spain, France, Italy and Greece. Additionally, excess mortality has been observed in several countries in Central and Northern Europe, including Belgium, the Netherlands, Switzerland, Sweden, Norway, Finland and Scotland. Mortality is particularly pronounced among the elderly aged 65 years or more. In addition to the circulation of influenza, the very low winter temperatures observed in several countries in recent weeks may have contributed to the high mortality. Overall, mortality in Europe seems to be on par with that seen during the latest previous influenza A H3N2 season in 2014/15. 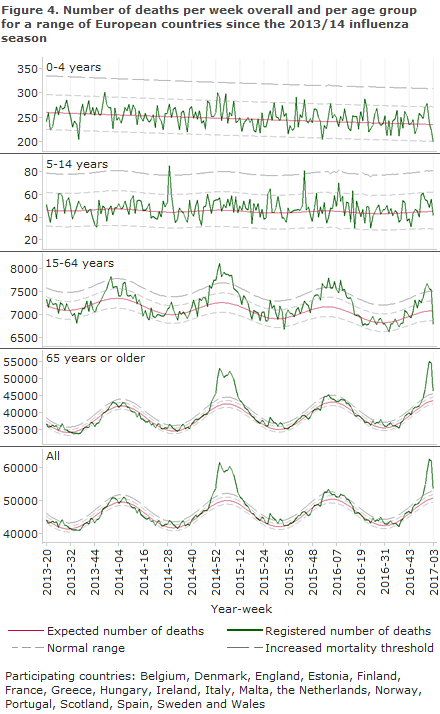 Europe is facing extensive influenza activity and excess mortality is observed in several countries, particularly among those aged 65 years or more. This is in line with expectations for a season in which influenza A H3N2 is the dominant virus, see the ECDC’s risk assessment.

In the past few weeks, Denmark has witnessed a rise in the number of patients admitted to hospital in whom influenza is detected.

Furthermore, a slightly increased mortality has been recorded among the elderly. Although the weekly number of confirmed influenza cases and the number of admissions do not currently exceed the number recorded for the previous season, elderly people comprise a greater share of the patients, which may lead to prolonged admissions and cause an increased workload at hospitals. Geographical variation in incidence may occur. We may expect another 4-6 weeks with comprehensive influenza activity and a heightened number of hospital admissions. Doctors are therefore encouraged to be attentive to patients with influenza-like symptoms, among others with a view to initiating antimicrobial treatment of risk groups in accordance with Guidelines on Influenza Management.

Vaccination reminders to be sent to e-Boks

Since May 2014, the SS has sent out reminders for parents to children who, according to the Danish Vaccination Register, lack at least one of the vaccinations recommended in the vaccination programme at 2, 6½ and 14 years, EPI-NEWS 20/14. The scheme has achieved a 5 and 6.4 percentage point increase, respectively, in the coverage of the MMR vaccine and the DTaP-IPV/Hib booster vaccine, given at 4 and 5 years of age, respectively. From 6 February 2017, these reminders will be sent to the parents’ e-Boks rather than by surface mail.

When the reminder scheme was initiated, e-Boks was only starting to be used by public authorities, and digital mail was made mandatory for citizens only from 1 November 2014.

The Danish Ministry of Health and Statens Serum Institut therefore assessed at the time that the target groups would be best reached by surface mail.

Approximately 7,000 reminder letters are sent out every month. Using e-Boks to send out the reminder letters reduces the postal and delivery costs and also eliminates the problem with letters that cannot be delivered due to transfer of residence, stuffed mailboxes, etc. Furthermore, reminder letters were previously sent out to the mother only when parents had shared custody of a child and lived at the same address.

From 6 February 2017, the reminders will continually be sent to e-Boks, and both parents will receive a copy in case of shared custody, whether they are living together or not. Citizens who are exempt from receiving their mail digitally will continue to receive the childhood vaccination reminder by surface mail in line with current provisions on mandatory digital mail.

As the DVR cannot implement any technical measures to ensure that such an instruction exists, registration is allowed - and it is left with the person who records vaccinations in the DVR to ensure that the necessary local permissions are in place. It is crucial that a local instruction is in place as the person performing any unauthorised lookups/registrations will otherwise be held accountable.

The instruction shall be prepared by the physician holding medical responsibility that the healthcare workers in question may give vaccinations to citizens on behalf of the physician in question. Instruction must take place in accordance with Guideline on authorised healthcare workers’ use of assistants , in which Section 2.2 describes the provisions on standard delegation of tasks.

Furthermore, pharmacists are also given full access rights to the DVR (lookup and data entry). As per 1 March 2017, access rights will be extended to include pharmacy-employed chemists and pharmaconomists whose employer has been authorised to use the DVR through FMK online.