A total of 358 (48%) of the cases, 321 men, 36 women and one neonate, were reported to the Notification System for Infectious Diseases (NSID), the Department of Infectious Disease Epidemiology and Prevention (DIDEP).

The NSID received one notification for which the diagnosis was based on dark-field microscopy exclusively. A total of 384 (52%) cases had not been notified to the NSID. As in previous years, the majority of the patients resided in the Copenhagen area, Table 2. 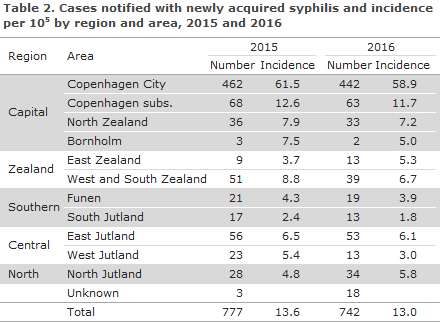 The total number of cases registered in 2016 remained largely in line with the preceding year (777), Table 2.

It seems, therefore, that the increase observed for a number of years has halted, Figure 1.

Among the 56 syphilis cases that were detected in women, 11 were found owing to the pregnancy screening. In one of these cases, no notification had been made to the NSID. Seven of the pregnant women were of Danish origin, one was from Greenland, and the remaining were from countries in Eastern Europe, Asia and Africa.

Additionally, one woman tested positive for syphilis in connection with the birth of her child. She had immigrated to Denmark a few days earlier and had therefore not participated in the screening. The new-born child had congenital syphilis. Furthermore, congenital syphilis was diagnosed in a 6-year-old child who was born in Denmark by an immigrant mother prior to the introduction of pregnancy screening for syphilis. The latter child was not notified with the NSID.

Among the 337 cases in which origin was stated, 247 (73%) were of Danish origin, 79 (23%) were immigrants, 8 were second-generation immigrants and 3 were tourists. The number of persons who had not been born in Denmark totaled 82 from 37 countries around the globe.

Campaigns have been run to motivate more MSM to undergo frequent testing for sexually transmitted infections, including HIV, syphilis and gonorrhoea. The campaigns seem to have been successful with respect to syphilis as the described increase in syphilis - an infection that is more common among MSM - has not continued. Something similar was observed for gonorrhoea in 2016, EPI-NEWS 18/2017; the increase in the number of new gonorrhoea cases has continued, but to a much lesser degree among MSM than among heterosexually infected persons.

The typical chancre is symptom-free and furthermore often localised to places where it goes undetected by the patient. Interruption of chains of transmission can therefore not be based on symptom-triggered visits to the physician. Therefore, it is essential that MSM are tested frequently, even if they have no symptoms. This leads to the diagnosis and treatment of otherwise unacknowledged syphilis, whereby tranasmission chains can be broken.

All MSM are recommended annual testing for sexually transmittable infections including HIV; and MSM who lead an active sex life and who do not always use a condom are recommended testing 2-4 times annually. This test frequency is also recommended by the US Centers for Disease Control (CDC) and the National Health Service (NHS) in the UK.

The share of the notified syphilis patients (particularly MSM) who has been tested for HIV is very high. This is encouraging, and it is important that MSM who are tested for syphilis also undergo testing for HIV, EPI-NEWS 46/09, chlamydia, lymphogranuloma venereum (LGV) and gonorrhoea, cf. the Danish Health Authority’s guidelines on the Prevention, Diagnosis and Treatment of Sexually Transmittable Infections.

Since 1 January 2010, the general screening of pregnant women has included syphilis, EPI-NEWS 27-33/2010. In 2016, a total of 11 cases of syphilis were detected among pregnant women, including 7 Danish women. All 11 women were treated, and none transmitted syphilis to their child.

Two cases of congenital syphilis were found. In one case, the mother had tested positive for syphilis in connection with the birth of her child. She had immigrated to Denmark a few days earlier and had therefore not participated in the screening. The new-born child had congenital syphilis. The second case was a 6-year-old who was born in Denmark before the introduction of the general screening.

Newly acquired syphilis, i.e. primary, secondary and latent syphilis, is notified to the Department of Infectious Disease Epidemiology and Prevention, SSI, on Form 1510, which is available for download at www.ssi.dk.

As from July 2015, the full civil registration number (CPR) of the patient needs to be stated on the form, whereby monitoring is improved. The new form also includes the questions that were previously stated on a separate white form from the SSI's syphilis laboratory and which, among others, facilitate staging. The latter form is therefore no longer used, which facilitates the work of the notifying physicians.