National monitoring of gonorrhoea at Statens Serum Institut (SSI) is effected by reporting (submission of isolates) to the Laboratory Notification System (LNS), the Department of Microbiology and Infection Control, and by clinical notification to the Notification System for Infectious Diseases (NSID), the Department of Infectious Disease Epidemiology & Prevention. The clinical notifications include information that is not given as part of the laboratory data: Mode of infection, sexual orientation, country of origin, country of infection, HIV status, etc.

Furthermore, data were extracted from the Danish Microbiology Database (MiBa); a nationwide auto-updated database of all test results from the departments of clinical microbiology (DCMs), EPI-NEWS 45/13. For gonorrhoea, this includes results from (1) culture, (2) PCR or other nucleic acid amplification technique (NAT), as most DCMs perform combined NAT for gonococci and Chlamydia trachomatis and (3) antibody determination. In case of repeated positive samples from a person, a new gonorrhoea case is defined as the passing of more than 21 days since the latest positive finding.

It is now possible to extract the numbers from the MiBa as from 2012. Figure 1 shows the relation between the increase in the number of laboratory-confirmed gonorrhoea cases and the number of cases notified to the NSID in the 2012-2016 period.

The share of diagnosed cases that are notified to the NSID has declined steadily from 69% in 2012 to 58% in 2016, and in 2016 the share presented considerable inter-area differences, Figure 2. 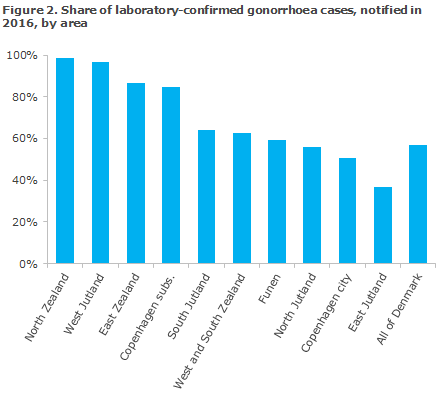 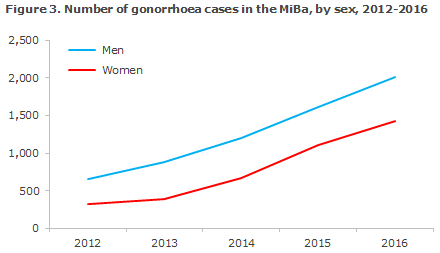 The increase in the number of gonorrhoea cases has been largely similar for the two sexes, but the relative increase has been higher for women. The MiBa had thus recorded a total of 1,431 women in 2016 compared with 319 in 2012, a 349% increase. For men, in the same period the number increased from 660 to 2,018, corresponding to a 206% increase.

The distribution by area remained relatively stable; the city of Copenhagen accounted for 37% of cases in 2016. In 2015 and 2014, respectively, the corresponding percentage was 30% and 34% (of the notified cases). 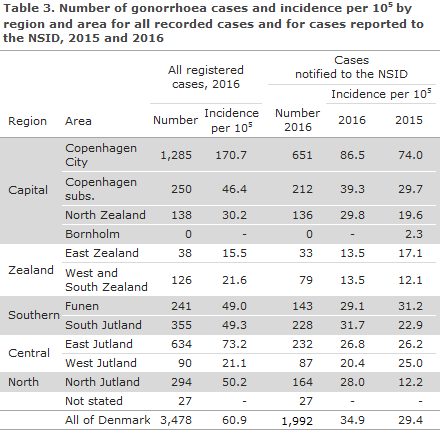 Among the 1,992 clinically reported cases, 1,157 were men and 833 were women. Furthermore, the group of clinically notified cases counted two of the three children with congenital eye inflammation. Among 1,157 cases reported in men, 635 (55%) were acquired by heterosexual transmission, 448 (39%) by homosexual transmission and in 74 (6%) cases the mode of transmission was not stated.

Furthermore, 35 of the cases among women were detected owing to pregnancy examinations/tests. A total of 14 women and 2 men were described as sex workers. 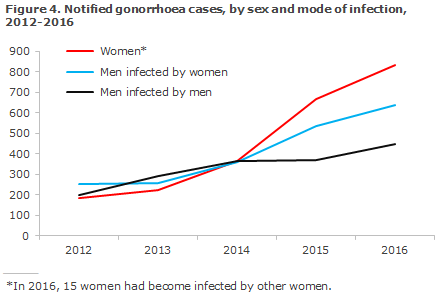 Among the 113 cases (95 men and 18 women) acquired abroad, 18 had been acquired in Thailand: 13 were HIM, two were MSM, and three were men for whom the mode of transmission was not stated. The remaining 95 were divided on 37 countries across the world.

The SSI received gonococcal isolates from 1,493 cases of gonorrhoea, which had been detected by culture in 2016 in a Danish DCM. The isolates were tested for ceftriaxone, azithromycin and ciprofloxacin sensitivity by determination of MIC (minimum inhibitory concentration, mg/l) and for formation of penicillinase, which indicates a high resistance to penicillin. 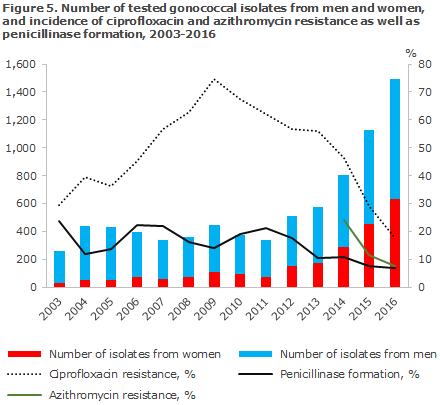 As part of a joint EU effort, the Reference Laboratory annually tests approx. 100 consecutively collected isolates against an expanded panel of antibiotics. In 2016 it was determined that among 111 isolates, 0% (0% in 2015) were resistant to cefixime (an oral cephalosporin) and 0% to spectinomycin (0% in 2015). None of the two drugs are marketed in Denmark.

Finding of ceftriaxone resistance in 2017

At several locations across the world, ceftriaxone resistance has been detected among gonococci, and treatment failure has also been observed with this drug. In 2017, a case of urethral gonorrhoea was reported in a man in whom both ceftriaxone resistance and reduced sensitivity to azithromycin were found, i.e. the two drugs that form part of the recommended combination treatment.

The detected ceftriaxone resistance was only marginal (MIC = 0.19 mg/l). The patient was treated in accordance with current guidelines, and tested negative by NAT at a post-control, and no secondary cases are known. Thus, treatment failure has yet to be reported in Denmark. 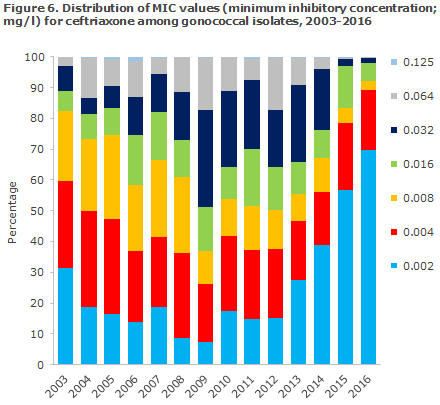 Table 4 presents the resistance for the 1,106 clinically notified cases for whom an isolate was submitted.

In late 2015, the Danish Health Authority published amended Danish guidelines on the diagnosis and treatment of sexually transmissible infections. The standard treatment is 500 mg ceftriaxone intramuscularly and 2 g azithromycin orally, both as a single dose. The exception to this rule is uncomplicated urogenital gonorrhoea detected by culture. Here, the first-line treatment is ceftriaxone 500 mg intramuscularly alone, and - in case of documented susceptibility - ceftriaxone 500 mg orally as a single dose.

Gonorrhoea should not be treated with azithromycin alone. Doses of 1g carry a considerable risk of treatment failure and resistance development. It is important that all treated patients attend check-ups. Asymptomatic patients should have a NAT performed 2 weeks after treatment has been concluded, and any positives should be supplemented by culture and sensitivity testing - as is the case during primary diagnostics.

NAT is considered to have a good specificity, and a positive NAT test shall always trigger immediate treatment. In the Danish Health Authority’s recommendations on prophylaxis, diagnosis and treatment of sexually transmitted infections, immediate initiation of treatment is recommended after a positive NAT test, but only after specimens have been taken for culture and susceptibility testing from all relevant localisations.

A considerable number of the diagnosed cases are not notified by the treating physicians. If the frequency of notification is uneven, the reports on mode of infection, country of infection, etc. may be misleading. Physicians are therefore encouraged to notify any patients diagnosed with gonorrhoea. This can be done by downloading, printing and filling out form 1510-G, and either sending it to the SSI by surface mail or by scanning the completed form and attaching it to an email that is then sent to the SSI's secure mailbox sygdomsanmeldelse@ssi.dk.

Shortly, the form will be available in PDF format and it will be possible to fill it in on-screen and then enclosing it to an email without printing it first. The physicians, both in practices and at hospitals, have safe mail boxes from where the notifications are to be sent.

As opposed to syphilis, which is mainly seen in MSM, gonorrhoea is now increasingly reported among heterosexuals, including among women. There is also a trend towards a lower median age, which is also taken to mean that gonorrhoea is once again very much present in the heterosexual environment. It is particularly worrying that several cases of gonorrhoea have been observed in pregnant women.

Healthcare workers are encouraged to be attentive to gonococci as a cause of conjunctivitis in neonates, particularly in the first two weeks of life. Gonorrhoeal conjunctivitis, which is not exclusively seen in neonates, is a potentially very serious condition that may cause loss of the eyeball if it goes untreated. These patients must therefore be referred urgently to a specialised department for eyesight-preserving treatment.

Furthermore, physicians are encouraged to test for the other relevant sexually transmittable diseases, e.g. syphilis, chlamydia and, if relevant, lymphogranuloma venereum (LGV).

Thorough laboratory-based diagnostics remains an important measure to counter further spreading of gonorrhoea. Diagnostics should include sampling from all relevant anatomical locations (urethra, rectum, throat and in women also the cervix) along with barrier protection by use of condom and partner tracking. Gonorrhoea can show few symptoms and be asymptomatic, and this is practically always the case for gonorrhoea of the throat and rectum. If the infection is located to these anatomical sites exclusively, and if it is not diagnosed, the patient constitutes an infection reservoir.

At several locations across the world, ceftriaxone resistance has been detected among gonococci, which may lead to treatment failure. In 2017, one case of combined resistance to ceftriaxone (even if only marginally resistant) and reduced sensitivity to azithromycin was reported. The patient was cured following treatment in accordance with current guidelines and thus treatment failure has yet to be reported in Denmark.

It is also clear that resistance to ciprofloxacin decreased steadily from approx. 75% in 2009 to 18% in 2016. In patients with uncomplicated urogenital gonorrhoea and documented sensitivity to ciprofloxacin, this drug may be used as a single dose. This favourable trend may, however, reverse again and a nationally maximally representative monitoring of antibiotics resistance in continuous fruitful collaboration with the DCMs is therefore extremely beneficial and quite unique internationally.