In the course of 2016, the national monitoring of hospital-acquired infections via the HAIBA (Hospital-Acquired Infections Database) was extended to include a total of four types of infection. 1) bacteraemia (bacteria in the blood), 2), urinary tract infections, 3) intestinal infections with Clostridium difficile (C. difficile) and, most recently, 4) deep infections following planned (elective) total hip arthroplasty (THA), EPI-NEWS 47/16.

HAIBA data go back as far as 2010. Before the HAIBA, selected hospital-acquired infections were monitored through prevalence studies that provided snapshots of the situation and were performed only as momentary checks at departments that participated voluntarily. With HAIBA, it is now possible to follow the development of the above-mentioned infections over time and for all hospitals and departments in Denmark.

The results of the monitoring are published at eSundhed under Quality of Health (Danish: Sundhedskvalitet), which is an interactive website that provides access to public health data. Furthermore, HAIBA can be accessed by following this link www.haiba.dk. Here, users can generate reports on the number and incidence of various types of infections per week or per month for relevant units (e.g. department, hospital, region). Furthermore, more detailed data are sent daily to the regions for further analyses.

The objective of the HAIBA is to establish the foundation for improvements in the efforts made to prevent infections. It is essential to note that HAIBA data reflect the current clinical and diagnostic practice at the hospitals and the data will therefore be affected by any changes made, e.g. an increase in the diagnostic efforts made, the introduction of novel diagnostic methods and/or criteria, changed guidelines, organisational changes and changes in coding practice.

Explaining or interpreting an increase or a decrease in incidence will therefore not always be straightforward: in some cases, a real change in the prevalence of infections may have occurred; in other cases, other explanations may apply, as explained above. Through an active dialogue aiming at analysing the trends, it is possible to interpret HAIBA data locally and therefore to identify focus areas. Additionally, HAIBA serves to increase the attention given to infection hygiene measures, and studies show that an enhanced focus alone may contribute to a decrease in the occurrence of infections.

The HAIBA draws on data from the Danish Microbiology Database (MiBa) and from the National Patient Register (NPR). The information from these sources of data is combined and processed by use of algorithms with a view to identifying the various infections and to classify which infections are hospital-acquired. The algorithms were previously described in EPI-NEWS 10/15, 11/15, 51/15 and 47/16. Additional details are available at the HAIBA website (www.haiba.dk) under “Documentation”.

In HAIBA, children under one year of age are excluded from the algorithm on urinary tract infections as the sampling basis is different for this group of patients. Furthermore, only figures on patients older than 2 years of age are included as it remains uncertain if C. difficile is pathogenic in the two first years of life.

This issue of EPI-NEWS presents the developments recorded for the currently included infections from 2012 to 2016, including the total number and the total incidence presented by sex, defined age groups and region. In this report, all temporary civil register (CPR) numbers (with letters in the serial number) have been removed. These CPR numbers comprise approx. 0.3% of all data, and the numbers therefore deviate marginally from the results presented at www.haiba.dk.

Bacteraemia, also known as blood poisoning, is a serious condition that is associated with a high mortality. The incidence of hospital-acquired bacteraemia in the 2012-2016 period was markedly higher among men than among women, and bacteraemia occurred more frequently in the older age groups, particularly in the 61-80-year age group, Table 1. 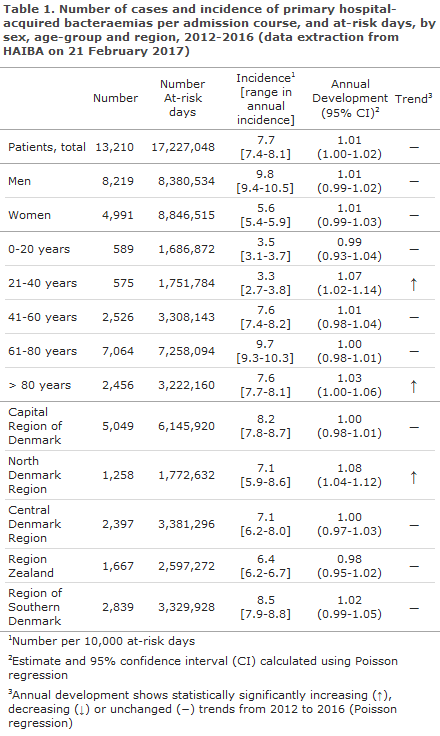 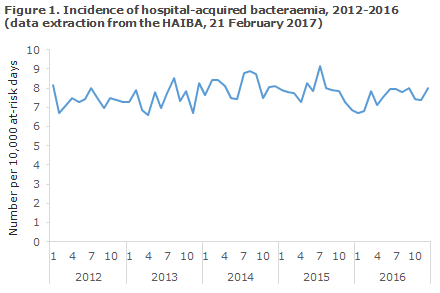 Urinary tract infection is a frequently occurring hospital-acquired infection that is mainly associated with use of catheters and immobilisation.

The incidence of hospital-acquired urinary tract infection remained relatively constant in the 2012-2016 period, Table 2 and Figure 2, but an decreasing trend was seen in the 80+ year age group. As expected, women had a higher incidence than men (52.3 versus 34.3 infections per 10,000 at-risk days) and the incidence increased with increasing age, Table 2. However, at the national level a decreasing trend was observed in the oldest age group (> 80 years). 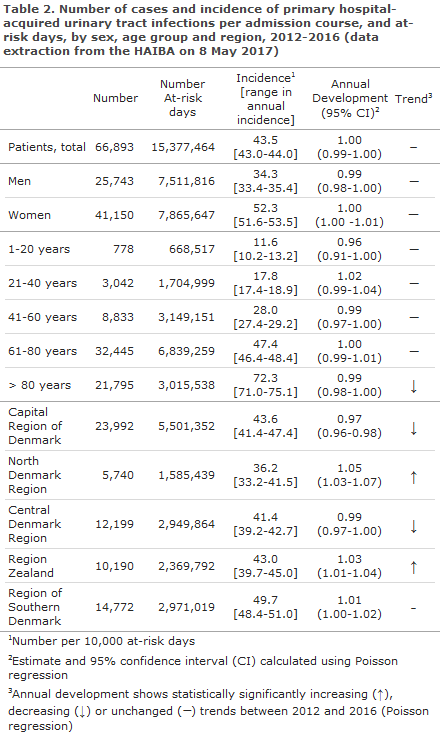 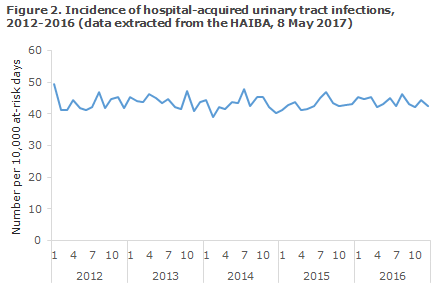 C. difficile causes serious intestinal infections and is strongly associated with antibiotic treatment. As the bacterium produces spores capable of surviving in the environment for a prolonged period of time, it can spread and cause outbreaks at hospitals. In 2008/2009, the Capital Region of Denmark was affected by several outbreaks, EPI-NEWS 13/09. It is likely that the infection subsequently spread to Region Zealand when patients were moved to this region, EPI-NEWS 7-8/12. 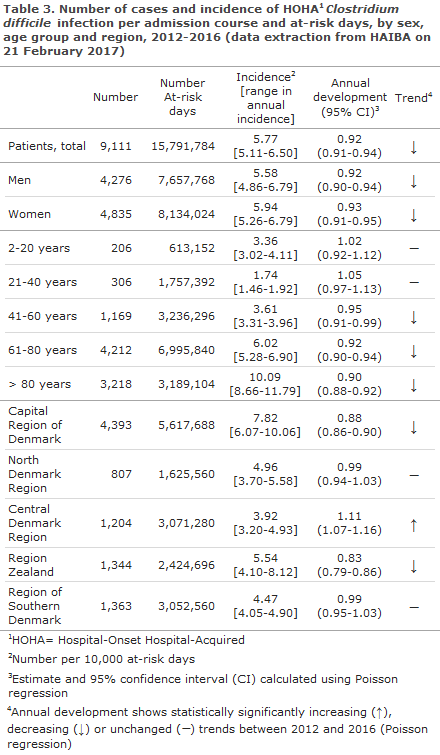 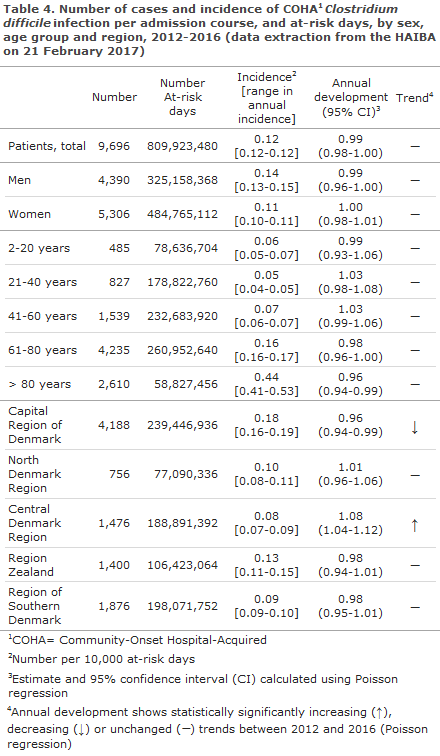 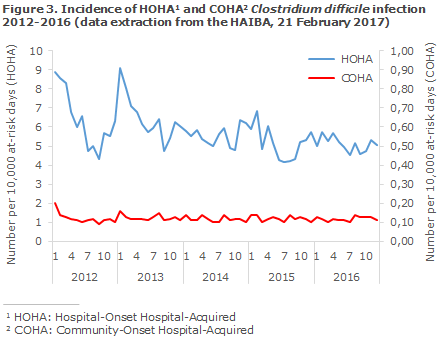 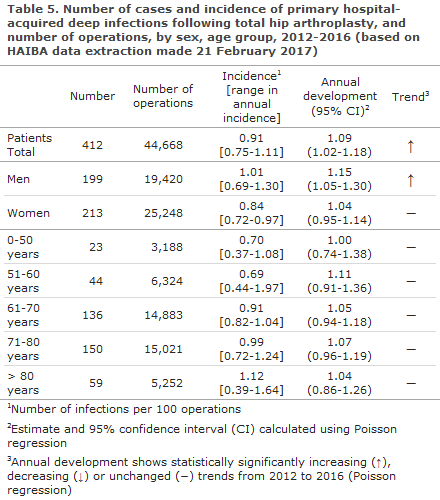 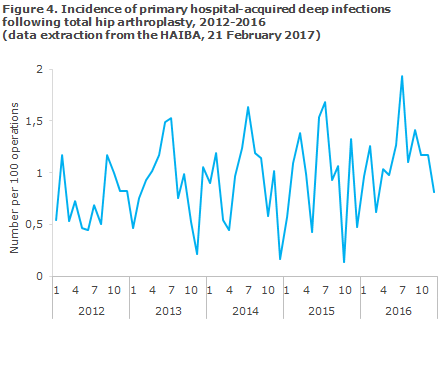 In 2016, the HAIBA website recorded approx. 1,100 weekly visits on average (range 53-1,765 visits). The average number of weekly visits to the interactive part of the website that may be used to generate defined reports was approx. 560, Figure 5. This is a much higher level than the one recorded for 2015 when the interactive part of the website was used 180 times a week on average (data not shown). 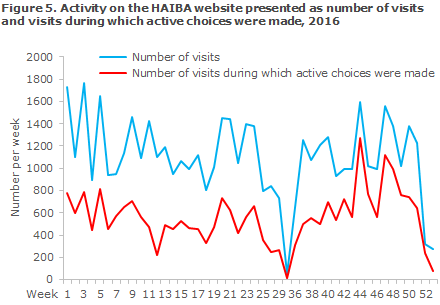 Additionally in 2016, several hospitals have inquired many times about possible explanations for the development in local numbers or to discuss how data may be used in practice to prevent infections. These contacts have been of great importance, both for the validation of HAIBA figures and to inform discussions about how to use the HAIBA in practice.

It is the intention to expand the HAIBA in the course of 2017-18 to include data on more selected post-operative infections.

A mentioned above, various factors may explain the trends seen over time, and it is important to keep this in mind when interpreting the data. For instance, some of the regional differences may be explained with reference to the composition of the patient population and regional diagnostic practices. Similarly, differences cannot be used directly to pinpoint departments or hospitals where the risk of a hospital-acquired infection is higher.

The incidence of deep infections following planned THA followed a statistically significant increasing trend in the 2012-2016 period, but this was not confirmed in a recently completed national study that allowed for adjustment for a number of confounders. The HAIBA incidence was higher (and the increase was statistically significant) in men than in women, which is a well-known fact (1.01 versus 0.84 per 100 operations).

The incidence increases with age and was highest among patients in the oldest age groups, even though it falls short of being statistically significant. Furthermore, the incidence varied with the season, and the highest incidence was observed during the summer period. It is important to interpret the results with caution as adjustment has not been made for a number of factors that affect infection or for changes in the indication for primary surgery or a possible change in the attitude towards performing wound debridement.

Furthermore, it is important to study the results in greater detail to confirm this interpretation. The seasonal variation will be further explored in the future.

The wording and design of the results provided by the departments of clinical microbiology also change over time, which calls for a continuous adaptation in the HAIBA. An example hereof is the data on urinary tract infections from Odense University Hospital where the Department of Clinical Microbiology changed its laboratory coding practices in the beginning of 2016 rendering the HAIBA algorithm incomplete. This has now been corrected. Scientific studies may also produce novel knowledge which, in turn, gives rise to adjustment of case definitions. Additionally, the healthcare system is changing rapidly towards shorter admission periods and more prolonged ambulatory courses.

This means that the traditional divide between hospital-acquired and community-acquired infections is disappearing. HAIBA needs to accommodate these changes and to be adapted to them. For instance, it may be considered in the future if incidence based on at-risk days is still relevant of if the starting point should rather be specific exposures. For these reasons, the HAIBA figures may change over time both prospectively and retrospectively because of re-calculation of reports from previous years.

The hospitals have voiced a need for further development of the HAIBA to strengthen the use of data and to improve the opportunities for applying the data in practice. Following this, some regions have chosen to present the data relating to C. difficile infections by use of statistical process control and they find that this makes sense in the dialogue between the Departments of Infection Hygiene and the clinicians.

HAIBA data that allow for linkage at the level of the individual will expectedly contribute further to local efforts. Such a solution is technically possible, but the legal basis currently needs to be clarified. Aggregated data are now being sent to the Clinical Quality Development Programme of the Danish Regions (Danish abbreviation: RKKP) and to the regions to allow these data to form part of the efforts made to improve quality in the regions. Data on bacteraemia and C. difficile infections now form part of the new Danish quality objectives.

As the system matures and the HAIBA is gradually implemented, it remains possible to use HAIBA data in the effort to prevent and reduce the number of hospital-acquired infections. We have continuously been in contact with several international stakeholders, and efforts are being made to develop similar monitoring systems in other European countries.

In the course of 2017, efforts will be initiated to prepare the HAIBA so that it may employ a new version of the National Patient Registry (NPR 3). Thus, the foundation remains for the HAIBA to become even more closely integrated with daily infection hygiene efforts.