In 2016, the Department of Infectious Disease Epidemiology and Prevention received six notifications of cases of acute hepatitis C; five of the cases were men and one was a women. The median age was 40 years (range 31-49 years).

All of the three homosexually infected men were known HIV positives.

Table 2 presents the distribution by region and area and the notification incidence per 105 citizens. 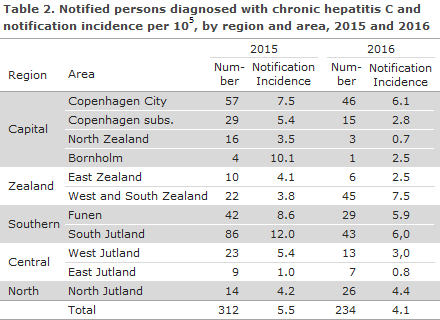 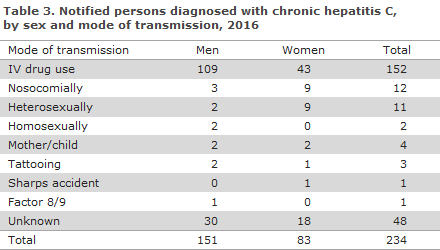 Twelve persons (5%) were notified as nosocomially infected cases in 2016. Among these 12 persons, three were born in Denmark (all women), infected in Denmark and Sri Lanka, respectively. The two women who had acquired their infection in Denmark had both become infected by blood transfusion prior to 1991. In Denmark, screening of donor blood for hepatitis C was introduced in 1991. The last woman was presumably infected in Sri Lanka, during surgery. For eight out of the nine nosocomially infected immigrants, infection occurred before their arrival to Denmark. The last immigrant was notified as having become infected in Denmark by blood transfusion before 1991.

Eleven persons were notified as heterosexually infected, including eight in Denmark, one in Lithuania, one in Poland and one in Pakistan. Among the heterosexually infected persons, six had engaged in intercourse with a person known to have hepatitis C. None of the 11 persons were known HIV infectees, and for seven, no information about IV drug use was available, whereas the forms for the last four explicitly stated “Never IDU”.

Two persons were notified as homosexually infected, both were known to have HIV and they had become infected in Germany and Brazil, respectively. One was a tourist visiting Denmark.

Hepatitis C infection rarely presents as an acute illness; it is generally not diagnosed until the chronic stage has been reached. Therefore, the notified cases of chronic hepatitis C infection are mainly due to infection many years earlier, which increases the risk of late sequelae such as chronic liver injury.

It is still mainly IV drug users who are notified with hepatitis C in Denmark. Therefore, former and current drug users are still recommended hepatitis C screening, not least owing to the improved treatment options.

All of the five men who had become infected via homosexual contact were known HIV positives. This relatively low number may possibly be explained by lacking notification from the clinics of infectious medicine that test HIV positives for hepatitis C. The number may also be low because fewer become infected with hepatitis C by that route in Denmark compared with reports from other European countries.

Sexual practices that involve mucosal damage and which therefore carry an increased risk of bleeding seem to be associated with a higher risk of hepatitis C among HIV positives than among HIV negatives. It was demonstrated that the hepatitis C risk of HIV negative men who have sex with men is equivalent to the risk recorded for the background population.

The number of notified persons who are assessed as having been infected nosocomially are in line with the numbers reported in previous years. All of those who became infected in Denmark were notified as having become infected prior to the introduction of screening of donor blood for hepatitis C. The number of persons who have hepatitis C detected via the blood donor screening is decreasing and has remained below 10 annual cases for the past 10 years. Seemingly, then, there is no basis for a recommendation of screening of specific generations of Danes.

No children in Denmark were notified as having become infected at birth in 2016. One 13-year-old child was notified as having become infected nosocomially in Romania before arriving to Denmark. Hepatitis C does not form part of the screening of pregnant women, partly because of the extremely low risk of transmission of the virus to the child, partly because infection in connection with pregnancy and labour cannot be prevented as is the case for hepatitis B. However, the relatively recent introduction of effective treatment with direct-acting antiviral agents has revolutionised the treatment of adults, and is expected to change the incidence of hepatitis C in Denmark. Women known to have hepatitis C are not recommended to avoid either pregnancy or breastfeeding.

A woman in her twenties has had measles detected at Aarhus University hospital. The woman had not received MMR vaccination as a child and in all likelihood became infected while traveling in Asia. Genotyping of the morbilivirus is not yet available. The woman presented with fever and catarrhalia at the end of Week 9 and was admitted to Aarhus University Hospital in the beginning of Week 10.

The Danish Patient Safety Authority (previously the Medical Officers of Health) is responsible for the handling of any infectees and the provision of information material for infectees.

Physicians in the Aarhus area are currently encouraged to be extra attentive to measles symptoms in children and young adults. It is important that any person who is suspected of having measles avoids being in waiting rooms with other patients as measles is extremely infectious.

Diagnostically, morbilivirus may be detected in the throat, in naso-pharyngeal secretion and in urine during the acute stage, and in urine by PCR and by detection of IgM antibodies in the blood for up to several weeks after acute illness. Any positive samples are sent for virus typing at the national WHO reference laboratory for morbili and rubella virus, the Department of Microbiological Diagnostics and Virology, Statens Serum Institut. Molecular characterisation of virus is today an important tool that supplements classic epidemiological monitoring.

Molecular characterisation can determine the geographical origin of the virus and may be used in infection tracking as it is possible to follow the spreading of the individual virus strains. Confirmed measles infection is notifiable to the Department of Infectious Disease Epidemiology and Prevention, Statens Serum Institut and to The Danish Patient Safety Authority on Form 1515. Furthermore, clinical infection with known contact to any confirmed case is notifiable.

Measles continues in circulation in a range of countries both within Europe and in more distant parts of the world, and considerable outbreaks do occur. In Europe, the period from January 2016 to January 2017, a total of 4,484 cases of measles were reported to the European Centre for Disease Prevention and Control (ECDC). In all, 3,015 of these cases are laboratory confirmed. The five countries with the highest number of cases are Romania (1,995 cases), Italy (1,020 cases), England (575 cases), Germany (364 cases) and Belgium (103 cases). Among these 4,484 cases, a total of 13 deaths were recorded due to the condition.

Worldwide monitoring is handled by the WHO, and Figure 1 presents the countries that have recorded the highest number of cases in the period from August 2016 to January 2017. 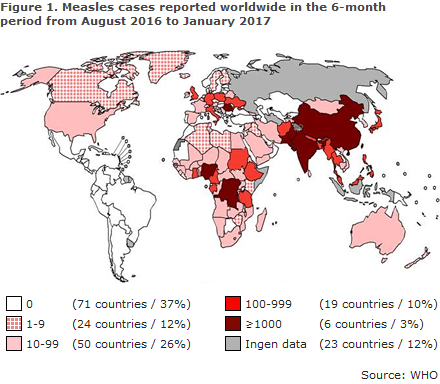 As shown, a total of 25 countries have reported more than 100 cases in the period. Data are missing for 23 countries. The Americas (PAHO) was the first continent to eliminate measles in September of 2016.

Vaccination against measles is covered by the MMR vaccine, which is offered to all children via the childhood vaccination programme. Non-immune travellers are at risk of becoming infected and of subsequently introducing virus into Denmark. This has been seen repeatedly in recent years, and you are encouraged to ensure that particularly children and younger adults have received MMR vaccination to avoid contracting the disease and reintroducing measles into Denmark. MMR vaccination is free of charge for children and adolescents under the age of 18 years. Women above 18 years of age may receive vaccination against rubella free of charge, and the vaccination may be given as an MMR vaccine. Persons who are more than 18 years old will defray the vaccination costs themselves. The Scandinavian Verification Committee (SVC) on eradication of measles and rubella has previously encouraged the health authorities of the 3 countries to ensure unrestricted and preferably free access to MMR vaccination for all non-immune citizens, i.e. including adults.

With a view to avoiding or weakening measles symptoms, MMR vaccination may be given to persons who have been exposed to measles infection within the past 3 days. If the MMR vaccine is given before 12 months of age, the vaccination shall be repeated when the child reaches the age at which the first dose of MMR vaccine is normally given (15 months). Human normal immunoglobulin (Ig) may be used as prophylaxis or to weaken the disease in susceptible patients who have been exposed within the past 6 days. For a detailed description of post-exposure management, please see EPI-NEWS 50/15.

The form for clinical notification of gonorrhoea, 1510 - G, has been made more user friendly, as some questions have been omitted.

When a full social security number is provided, there is no need to fill in information on sex, age and residence, since these data are retrieved via the social security register. This information must be entered on the notification form only in cases in which the patient does not have a full Danish social security (CPR) number (refugees, tourists, patients tested anonymously, etc.).

Questions about diagnostic method and about the localisation of the infection are now collected via the MiBa, EPI-NEWS 38/16, and should no longer appear from the clinical notification.

Information about treatment will no longer be collected via the clinical notification.