As previously announced, EPI-NEWS 2/16, the opening hours of the Department of Infectious Disease's telephone advice service for healthcare workers will be limited to working days except Wednesdays 8.30-11.00 and Wednesdays 12.30-15.00.

The new opening hours will apply as from 1 March 2016. Travel-related advice is no longer given, either in writing or by phone.
(The Consultancy Team, The Department of Infectious Disease Epidemiology)

Danish children with one or two ethnic African parents who visit their family in Africa run a very high risk of contracting malaria, but any infant staying in areas with risk of chloroquine-resistant malaria should be protected effectively against this malaria type.

For a prolonged period of time, it has not been possible in practice to give malaria prophylaxis to children below 11 kg, which is the threshold weight for registered use of a atovaquone-proguanil. This is so because proguanil (Paludrine®) for combination with chloroquine is no longer available in Denmark, and because marketing of mefloquine (Lariam®) in Denmark stopped as per 1 February 2016, see below.

Since 2007, the American Centers for Disease Control and Prevention (CDC) have approved off-label use of atovaquone-proguanil for children weighing less than 11 kg. Even though the required studies relating to this use have not been performed, a range of conditions speak in favour of this use.

The main argument in favour is that the efficacy and safety of atovaquone-proguanil for treatment of malaria have been demonstrated in children weighing down to only 5 kg. It is thus only prophylactic use that is off-label in the youngest children.

On this basis it was decided that pro.medicin.dk will now provide the recommended dosage for children weighing down to 5 kg, and the SSI's Reference Group supports this recommendation. For malaria prophylaxis, the dosage is as follows:

Dosage for malaria prophylaxis with atovaquone-proguanil:

As from 40 kg the adult dose applies.

Atovaquone-proguanil is not produced with a score-line, and for children weighing 5-9.9 kg the two halves of the same tablet should be given on two consecutive days to compensate for any difference in dose due to the tablet being broken in half. Parents may consider buying a tablet divider. The tablet may be crushed and mixed with a bit of porridge or similar.
(The SSI Reference Group for Malaria Prophylaxis and Vaccination Recommendations. K. David, Department of Infectious Medicine, Hvidovre Hospital)

According to the summary of product characteristics for Doxycyklin® and Vibradox®, children below 12 years of age should not be treated with tetracyclines. Regarding doxycycline dosage, it is also stated that the age limit is 12 years, but for treatment of some conditions (e.g. erythema migrans and neuroborreliosis), doxycycline may be used down to 8 years of age.

The background for this is that tetracyclines given while the child's teeth mineralise (the final half of pregnancy, the neonatal period and until 8 years of age) may cause enamel hypoplasia and discolouration of the teeth. Tetracyclines are integrated in the growing skeleton, and a reversible cessation of growth may occur.

Doxycycline should therefore also not be used in pregnant women after their first trimester, unless the potential benefits to the mother outweigh the risks for the unborn child, and provided other anti-malaria medication cannot be given.

Neither Doxycyklin® nor Vibradox® are registered for prevention (or treatment) of malaria, but theoretically, all drugs in the tetracycline group have an antimalarial effect. As there is neither information about nor experience with optimal dosing of other tetracyclines, doxycycline should be used; and after considering other effective malaria prophylaxis treatments, it may be used off-label observing the following age restrictions, corresponding to those recommended by the Centers for Disease Control and Prevention (CDC) in the USA as well as in Sweden and Australia:

Adults and children > 8 years: 100 mg once daily as from the day before entry into an area with risk of malaria infection and through 28 days after leaving the area.
(The SSI Reference Group for Malaria Prophylaxis and Vaccination Recommendations. K. David, Department of Infectious Medicine, Hvidovre Hospital)

Lariam® is no longer marketed in Denmark

As from 1 February 2016, Lariam® (mefloquine) is no longer marketed in Denmark. In line with atovaquone/proguanil and doxycycline, the medicinal product may be used for malaria prophylaxis in connection with travels to areas with widespread chloroquine resistance.

Since 2013, Lariam® has only been available for prescription by specialists in infection medicine and clinical microbiology and has been comprised by a risk minimisation programme, EPI-NEWS 39/13. Along with chloroquine, the product has been the only available malaria drug in Denmark for pregnant women in their 2nd to 3rd trimester, EPI-NEWS 26a+b/13. Therefore, we can currently offer no effective prophylaxis for this group of travellers to areas with widespread chloroquine resistance.

According to the manufacturer, the product will, however, be available from the pharmaceutical company for pharmacies/hospital pharmacies provided a personal or departmental dispensing permit was given by the Danish Medicines Agency.
(The Consultancy Team, Department of Infectious Disease Epidemiology)

As previously noted, EPI-NEWS 4/16, BCG vaccine against tuberculosis from a Japanese manufacturer is currently being dispensed. The vaccine is provided in 2 boxes with freeze-dried vaccine and solvent, respectively. Normally, the batch number printed on the box is used for registration, EPI-NEWS 22/10, but in this case each of the two boxes carry a separate batch number.

When registering in the Danish Vaccination Register (DVR) either through a separate records system or via www.fmk-online.dk, the batch number on the box with freeze-dried vaccine shall be used.
(The Consultancy Team, Department of Infectious Disease Epidemiology)

A study published in 2015 showed that less than half of the patients with laboratory test-results consistent with neuroborreliosis were reported to the SSI. Neuroborreliosis has thus previously been characterised by considerable under-reporting, Figure 1. 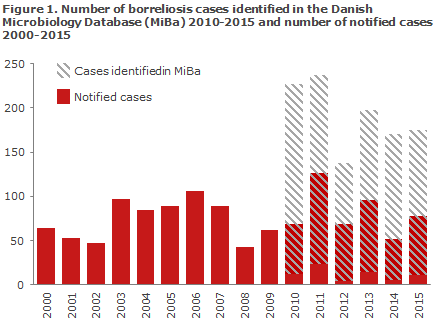 This was probably so because the treating physicians were not sufficiently aware of the requirement to fill-in and send a paper form whenever a neuroborreliosis diagnosis was made.

The new electronic monitoring of neuroborreliosis is more complete and provides a more accurate picture of the occurrence of the disease. This improves our capacity to explore regional differences in occurrence, identify risk groups and follow trends as they develop over time.

Data from the new neuroborreliosis monitoring are presented at the SSI website under Overvågning i tal og grafer (Monitoring presented as figures and graphs), which you will find on the Danish version of the site under the menu item ”Laboratorieanmeldelser” (Laboratory notifications). The page allows users to see neuroborreliosis cases per year, month, sex, age, municipality and area for the 2010-2016-period. Data will be updated quarterly.

Covering the period as from 1994, data from the individual monitoring will remain available under Overvågning i tal og grafer (Monitoring presented as figures and graphs), which you will find on the Danish version of the site under the menu item ”Individuelle anmeldelser” (Individual notifications)

Chlamydia has been notifiable in Denmark since 1994. Laboratories that perform chlamydia testing have submitted quarterly reports on the number of performed analyses and the number of positive findings to the SSI. For the positive findings, the patient’s sex and age, the type of test performed, the test date and also the type of organisation ordering the test have been reported.

These data have formed the basis of an annual chlamydia report, see e.g. EPI-NEWS 34/15. In line herewith, the data on the SSI website have been updated annually.

Henceforth, chlamydia monitoring will be done electronically by collection of data on the positive chlamydia tests from the laboratories that diagnose the condition, mainly through the MiBa.

These data will also be presented on the Danish version of the site under ”Overvågning i tal og grafer” (Monitoring presented as figures and graphs). The page allows users to see the distribution of chlamydia cases by year, month, sex, age-group and area for the 2000-2016 period.

Data from the 2000-2014 period will still be based on the annual reports, whereas data as from 2015 are based on the MiBa. The annual number of cases based on the MiBa data is 2-3% lower than that in the previous reports for the 2011-2015 period. This is owed to the fact that repeat-registration can be avoided when using the MiBa data. Henceforth, data will be updated monthly.
(T.G. Krause, K. Mølbak, L. Espenhain, M. Voldstedlund, Department of Infectious Disease Epidemiology, S. Hoffman, Microbiology and Infection Control)