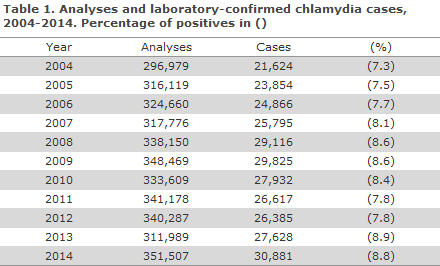 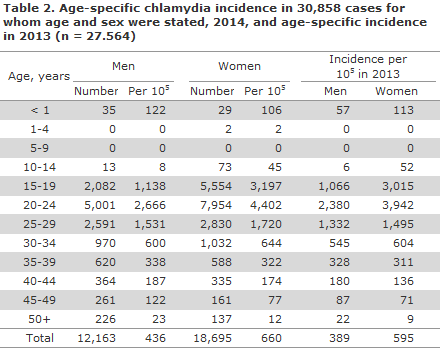 Based on the municipal code of the practice or hospital department performing the test, each individual chlamydia case may be ascribed to a specific municipality, part of country or region, Table 3. 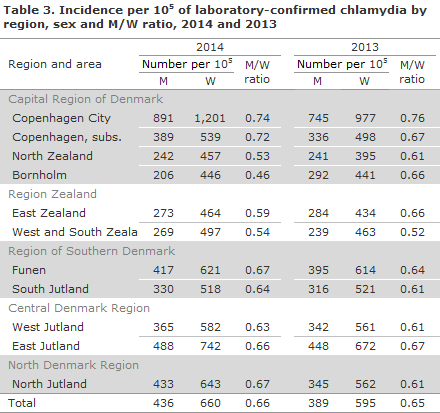 In 2014 the number of chlamydia analyses was 12.7% higher and the number of detected cases was 11.8% higher than the corresponding figures for 2013, but the positive rate remained largely unchanged at 8.8% and 8.9%, respectively. For both sexes and in most age groups and regions, a higher incidence was observed in 2014 than in 2013. This may probably be explained by the increased testing activity, which likely also explains the increased number of detected cases in 21-29-year-old women.

As in 2009-2013, the male proportion of the detected cases had levelled off at nearly 40%, but there is no reason to believe that chlamydia is less prevalent among men than among women. Increased testing of men should therefore be continued. As previously, the number of men who had rectal chlamydia detected increased in 2014. When rectal chlamydia is found in a man, he should also be tested for syphilis, gonorrhoea, lymphogranuloma venereum (LGV) and HIV, EPI-NEWS 20/08.
(S. Hoffmann, Microbiology and Infection Control)

The Danish Health and Medicines Authority extends the limited subsidy (Danish: klausuleret tilskud) for 13-valent conjugate pneumococcal vaccine (PCV13). The subsidy will comprise persons with chronic obstructive pulmonary disease (COPD) who are more than 65 years old or suffer from severely reduced pulmonary function with an FEV1 of less than 40% of the expected value. The extension came into force on Monday 17 August 2015.

In order for the patient to qualify for a subsidy, the physician must mark the prescription “subsidy”, declaring that the person is covered by the limited subsidy.

Apart from this extension, the limited subsidies for PCV13 and 23-valent pneumococcal vaccine are identical, EPI-NEWS 51b/12.
(Danish Health and Medicines Authority)