This issue of EPI-NEWS brings a report of the number of patients tested for and cases detected of selected haemoparasitic infections: malaria, schistosomiasis, leishmaniasis, filariasis and trypanosomiasis. The report is based on detection of specific antibodies performed at the Parasitology Laboratory, Statens Serum Institut (SSI), in the period from 2005 to 2015.

The distribution in the number of blood samples received for serological testing for the five diseases for the 2005-2015 period is presented in Figure 1.

Malaria is caused by infection with protozoa of the Plasmodium genus . On suspicion of acute malaria, microscopy or PCR is used, whereas serological testing is relevant, e.g. for screening of blood donors. Blood may thus be tested for Plasmodium-specific antibodies, which supports detection of a previous or ongoing malaria infection.

It is estimated that the majority of the samples had been submitted in connection with screening of potential blood donors. 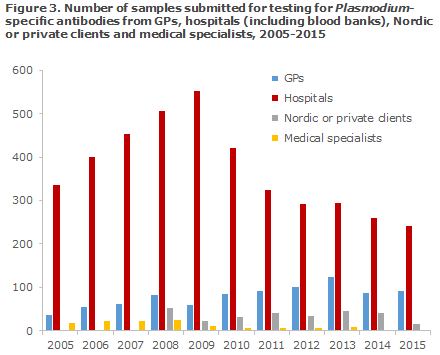 Schistosomiasis is caused by infection with blood-flukes of the Schistosoma genus . When bathing in freshwater lakes in schistosomiasis-endemic areas, one risks becoming exposed to larvae that penetrate the skin and spread by the blood and lymph to the veins around the urinary bladder or intestine, where they mature into adult unisexual worms. The females excrete eggs that move through the tissue to reach the intestine or urinary bladder and are excreted from there with the faeces or urine.

Owing to their high sensitivity, antibody tests are particularly relevant on suspicion of infection in persons from non-endemic areas, including Danish travellers, as microscopy of urine and faeces will often be negative in patients with “light” infections as are frequently seen in people who have become infected following brief exposure while travelling.

In the entire period, a total of 4,737 samples from 4,027 patients (4,339 cases) were tested for Schistosoma-specific antibodies; 538 patients had more than one blood sample tested in the course of the period. The IFAT analysis is designed to detect antibodies against GAA (gut-associated antigen) and MBA (membrane-bound antigen). GAA antibodies are primarily detected in primary infections, but only rarely in chronic egg carriers. MBA antibodies may both be detected early in the disease course and in the following years. In travellers who are not from an endemic area, a positive GAA and a concurrent negative MBA will underpin the diagnosis of “primary infection”. A negative GAA and a concurrent positive MBA in ethnic Danes is typically not diagnostic, but in immigrants from endemic areas it is often a sign of previous infection. For GAA as well as MBA, a titre corresponding to 1:16 is considered the threshold value. In the present report, a titre value of 1:16 is considered negative.

In all, 668 (16.6%) of the tested patients had antibodies against either GAA and/or MBA in the period, distributed on 767 cases, Table 1. Generally, in the course of the entire period, more tested positive to GAA than to MBA. In the 2009-2010 period, more than every fourth patient tested positive to GAA and/or MBA. In this exact period, a large group of Danish travellers was tested following relevant exposure through river rafting and bathing in the Nile (Uganda) in July of 2009. These persons were followed serologically as a cohort, and approx. one third of the persons seroconverted within the next six months; the majority of the seropositives developed antibodies against GAA, but in a limited number of positive patients, only antibodies against MBA were detected. Considerable variability was seen with respect to the time of seroconversion: from weeks to up to nearly 6 months, which is important to take into consideration when planning the time of sampling and in the differential diagnostic considerations.

It should be mentioned that patients who have become exposed to avian schistosomes, Trichobilharzia, which may cause “swimmer's itch”, e.g. following bathing in Danish lakes, may have developed antibodies that cross-react, primarily with MBA.

Leishmaniasis is caused by infection with unicellular parasites of the Leishmania genus , which are transmitted through sand fly bites.

It is important to underline that these results are only based on serology and that the data therefore do not reflect the full scope of leishmaniasis detected in Denmark. In 2009, the SSI introduced a method for the detection of Leishmania, and the serological data should be considered in conjunction with the recently published report on the number of cases of leishmaniasis detected by PCR in the period from 2009 to October 2016, EPI-NEWS 44/16. It should be mentioned that biopsy material is often submitted from a patient for PCR testing without an enclosed blood sample for antibody determination.

Filariasis comprises a group of diseases that are all caused by infection with closely related microscopic filarial round worms that are all transmitted by mosquitoes or midges. The different forms of filariasis are found in specific geographical areas; for travellers, the most important areas are located in South-East Asia, the Pacific and in Africa, particularly West, East and Central Africa. Symptoms typically only present many months after exposure. Antibody testing is used on suspicion of infection following relevant exposure and may be used for microfilaraemic filariasis (e.g. lymphoid filariasis) as well as for amicrofilaraemic filariasis (e.g. dirofilariasis).

In the 2005-2015 period, a total of 642 samples from 586 patients were tested for filarial-specific antibodies, Table 3. The number of tested patients per year ranged from 35 to 76. It was observed that approx. 10% of the patients with a positive screening test (anti-Dirofilarial IgG antibodies) tested positive to IgG4 antibodies. If IgG4 is detected, it is likely that the infection is productive, i.e. microfilaria can be found in the blood.

The remainder of the screening-positive persons had antibodies that probably represented an older (unproductive) infection - infection with Dirofilaria repens - which does not cause microfilaraemic filariasis in humans (see below), or cross reaction with another nematode. Among patients with a current infection, a minimum of two ethnic Danes were found of whom one tested positive in 2010, 2011 and 2015, but for whom no travel history was available. For the second patient, filarial exposure had probably occurred during a journey to Cameroun. The rest of the IgG4-positive persons had African-sounding names. 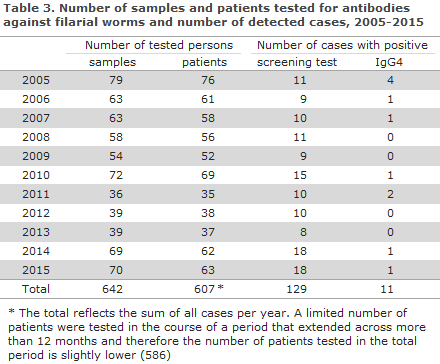 The share of screening-positive patients was 21.3%, whereas only 1.8% of all patients tested positive to current, productive infection. . Even though cross reaction and other methods may explain, in part, this relatively high positive rate, it is also likely that part of the positive screening results may be accounted for by infection with Dirofilaria species that are found in most parts of the world and which may also be transferred by mosquitoes. The Dirofilarial microfilaraemia that is typically seen in dogs, cats and similar animals is not seen in humans, who may, nevertheless, develop subcutaneous nodules, corresponding to the migrating larvae/adult worms.

Trypanosomiasis may be caused by several species of Trypanosoma, including Trypanosoma brucei, which can cause African sleeping sickness, and T. cruzi, that may cause Chagas disease. T. brucei is found in Africa, whereas T. cruzi occurs in South and Central America. T. brucei is further divided into T. brucei gambiense and T. brucei rhodesiense, among which the latter runs the more aggressive disease course. 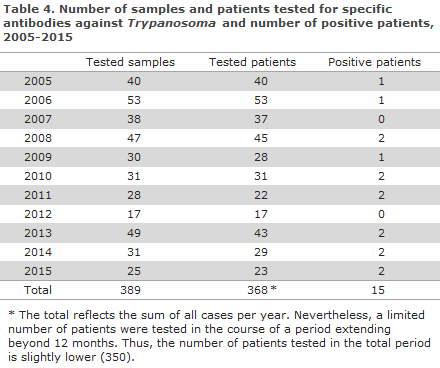 The current report generally represents nationwide data. Nevertheless, serological diagnostics for the mentioned parasites are also to a limited extent performed at other laboratories of clinical microbiology apart from the SSI. Furthermore, it cannot be excluded that some samples are sent for antibody testing in laboratories abroad, which may, in part, explain the reduction in the number of samples submitted to the SSI from hospitals.

The total number of blood samples submitted for testing for one or more of the five diseases in the entire period was 12,097. Among the described tropical diseases, the conditions most frequently tested for were malaria and schistosomiasis, Figure 1.

At the other end of the spectrum, 16.6% of the patients tested by the schistosomiasis antibody test were positive, which represents a considerable increase compared with the previous 10-year period. This may be due to more travellers being exposed through bathing in risk areas and to increased attention to subsequent testing of patients.

The five described parasitic infections may be difficult to detect by microscopy or PCR alone, either because it is hard to do the sampling and/or because the infections in question are often only mild or latent.

The advantage of antibody testing is that these tests are often the most simple and also the most sensitive methods for detection of parasitic infections in travellers who have returned from the tropics, including blood and organ donors.

For some of the diseases, e.g. schistosomiasis, it is important for the diagnostic considerations to be aware that antibodies in some patients can only be detected up to 6 months after exposure. The interpretation of antibody results for the mentioned parasites can occasionally be difficult, and factors like relevant exposure (including travel history and recollection of insect bites), clinical findings, symptoms, image diagnostics, possible cross reactions and results from other microbiological and other laboratory tests should be meticulously included in the interpretation of the antibody results.

In collaboration with the Danish Health Authority, it has been decided to use the small surplus stock of 1,500 vaccines, which had otherwise been reserved for vaccination of pregnant women, for vaccination of the remaining risk groups that are comprised by Executive Order of 22 September 2016 on free influenza vaccination to select population groups.

These vaccines will be dispensed on the basis of specific medical indication by telephone contact to the SSI Order Office.
Please note that the Institute does not send out vaccines in week 52, i.e. between Christmas and New Year's Eve.

Unless special circumstances arise, EPI-NEWS will not be published until week 2 , 2017. The editorial team wishes everyone a merry Christmas and a happy New Year.
(Department of Infectious Disease Epidemiology)