The Laboratory of Parasitology at Statens Serum Institut (SSI) performs more than 20 DNA-based diagnostic analyses. For some parasitic infections, the SSI is the only location in Denmark where PCR diagnostics are performed. In this issue of EPI-NEWS, we present reports from the latest years’ PCR-based diagnosis of amoebic keratitis, leishmaniasis and toxoplasmosis.

Acanthamoeba is one of several otherwise free-living amoebae which in humans may cause infection of the cornea and the central nervous system (CNS). Testing for Acanthamoeba may therefore be relevant in connection with keratitis work-up and on suspicion of amoebic meningoencephalitis. Amoebic keratitis if seen mainly in contact lens users and may be associated with a prolonged and painful disease course, which may be sight-threatening if left untreated. Diagnosis of amoebic keratitis primarily involves use of a so-called confocal microscope and PCR on DNA extracted from corneal scrapings.

In the period from 2011 to October 2016, a total of 562 samples – primarily corneal scrapings – from 430 patients were tested at the SSI for Acanthamoeba by PCR, Figure 1. 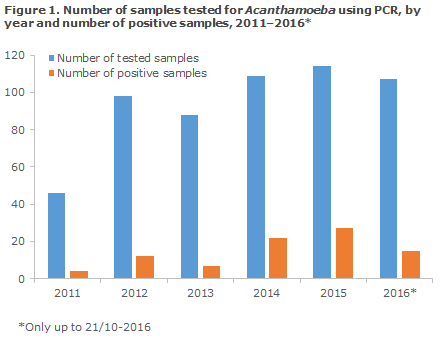 Among these 562 samples, 87 (15%) samples from 66 patients tested positive. Approx. 80% of all samples were submitted by the large ophthalmology departments in the towns of Glostrup and Aarhus. The median age for tested and test-positive patients was 45 and 52 years, respectively. 54% of those tested were women. Of 66 positive patients, 34 (52%) were men. Clinical information was available only for selected samples, but a positive test seemed to be linked mainly to prolonged, one-sided keratitis that does not respond to treatment with, e.g., chloramphenicol, ciprofloxacine and/or tobramycin. The proportion of the submitted samples that tested positive remained stable throughout the period.

Considerable genetic diversity exists in Acanthamoeba, and – to date – at least 20 different genotypes (T1–T20; that should be considered independent species) of Acanthamoeba have been identified. A review of preliminary data indicates that primarily subtypes T4, T3 and T11 cause amoebic keratitis in Denmark.

In addition to Acanthamoeba, infection with microsporidia and other fungi, bacteria and viruses may cause keratitis. At the SSI, an ongoing study aims to elucidate the differential diagnostic value of testing DNA from corneal scrapings with 16S/18S PCR methods, which makes it possible to detect DNA from fungi, parasites and bacteria in a single analysis.

In the period from 2011 to October 2016, a total of 30 samples from 21 patients were submitted for analysis for free-living amoebae (R099), which - in addition to Acanthamoeba also comprises testing for Balamuthia and Naegleria. One sample - an isolate from a cerebral biopsy from a 13-year-old patient who was undergoing clinical work-up in Sweden - tested positive to Acanthamoeba.

Additionally, several cerebral biopsies and spinal fluid samples from a 71-year-old Norwegian woman tested positive to Naegleria. The patient had become infected during a journey to Thailand.

Leishmaniasis is a vector-borne condition. Leishmania parasites are transmitted by infected sand flies, which inject the single-celled parasites into the injection wound as they suck blood from e.g. humans. Development and localisation of the symptoms depend on the species that you have become infected by, and where on the body you were stung. Three typical types of symptom manifestations exist: Cutaneous leishmaniasis (“Oriental sore”) that manifests as chronic ulcers, visceral leishmaniasis (“kala-azar”) and mucocutaneous leishmaniasis. The latter is typically seen in cases with infection by the Leishmania species found in Central & South America (“New World leishmaniasis”), whereas cutaneous and visceral leishmaniasis are typically seen in patients who have become infected in Africa, Asia and Southern Europe (”Old World leishmaniasis”), see the SSI’s Disease Dictionary (Danish: Sygdomsleksikon).

In the period from 2009 to October 2016, a total of 259 samples from 224 patients were tested for Leishmania by genus-specific real-time PCR, Figure 2. 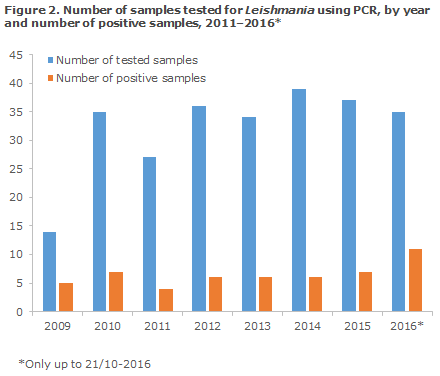 Twenty (8%) of the 259 tested patients did not have a Danish civil registration number (CPR number); 11 (55%) of these patients tested positive. Therefore, the share of positive patients with no Danish CPR number was 21%. At least seven of those who tested positive were refugees from Syria.

The number of samples tested remained stable in the period 2010–2016, as did the proportion between submitted and positive samples, even though signs of a possible increase were seen in 2016 (only data from the three first quarters are included).

The samples that test positive to Leishmania by real-time PCR are routinely identified to the species level by PCR and subsequent DNA sequencing, as information about the species may influence the choice of treatment, the prognosis, etc. The number of positive samples by species is presented in Table 1. In four cases, species identification was not possible.

Leishmania tropica was seen exclusively in skin biopsies, mainly from the face and extremities. Seven of the 21 patients with detected/possible L. tropica infection did not have a Danish CPR number, and several of the remaining patients were of Middle-Eastern origin. Similarly, Leishmania major was detected only in skin biopsies. Two of the five patients with L. major did not have a Danish CPR number.

Parasites belonging to the Leishmania infantum/Leishmania donovani complex were detected in skin as well as in EDTA blood and bone marrow. Clinical information was available only for a limited number of the patients. It should be mentioned that a minimum of two of the infectees had probably been infected while travelling in the Mediterranean region (Turkey and Italy).

Six cases (corresponding to seven samples) of ”New World leishmaniasis” were detected; all six patients had a Danish CPR number; two of the patients had been to Costa Rica and two had been to Ecuador of whom at least one had visited the Galapagos Islands. The patient with Leishmania mexicana had travelled in Central & South America. All six cases were probably skin manifestations as judged from the clinical information.

As seen, more than half of the cases were caused by Leishmania species that cause cutaneous leishmaniasis and where a negative antibody test will not exclude the diagnosis.

The overwhelming majority of infections probably run their course without any symptoms; but as the infection is life-long, immunosuppression may reactivate the infection causing disseminated disease. Vertical transmission from the mother to the foetus is possible if the mother is infected for the first time during the pregnancy. If the foetus becomes infected, the result may be an abortion, or - if the foetus survives - congenital toxoplasmosis. Finally, a Toxoplasma infection may cause swollen lymph nodes and/or ocular symptoms in otherwise healthy people. 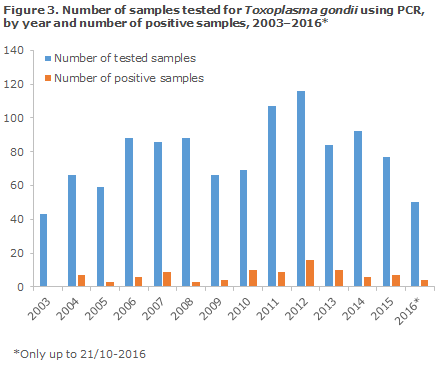 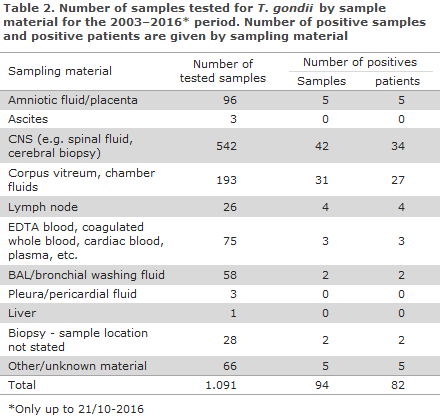 A total of 542 CNS samples were tested, including 499 spinal fluids and 43 cerebral biopsies, Table 2. Among the 499 tested spinal fluids, 28 were positive (6%), whereas 14 positive samples were found among the 43 tested cerebral biopsies. At least seven of the overall 34 positive patients were known to have congenital toxoplasmosis, and a minimum of six of the remaining were known HIV infectees.

In the period, a total of 193 eye samples were tested. Among these, a minimum of 136 (71%) were corpus vitreum samples; the remainder were either chamber fluid samples or unspecified samples. A total of 23 of the 31 eye samples that tested positive were corpus vitreum samples. Also here, the clinical information was sparse, but some of the patients were known to have uveitis or retinitis.

Out of three positive bone marrow samples, one was from a retinitis patient, one was from an infant with suspected congenital toxoplasmosis, and no clinical information was available for the third sample.

A relatively constant ratio was observed between the number of submitted samples and the number of positive samples in the course of the period.

The presented data represent PCR analyses that are performed exclusively at the SSI. The data therefore capture all cases diagnosed in the period in Denmark using the method of analysis in question.

Culture, microscopy and biological assays were previously used for direct detection of Acanthamoeba, Leishmania and Toxoplasma, respectively, but the SSI now exclusively uses PCR, which is more sensitive, allows for standardisation and facilitates species-level identification. Nevertheless, diagnosing toxoplasmosis is based mainly on antibody testing (indirect detection), whereas PCR may be used on suspicion of a specific focus, e.g. in immunosuppressed patients and where the interpretation of serological test results may be difficult.

It should be noted that, to date, more than a third of all skin samples submitted for PCR to test for Leishmania in 2016 have been positive, and it should also be noted that 15 of the 18 detected L. tropica cases detected in the period were recorded over the past three years (2014–2016).

As L. tropica nearly occurs endemic practically only in the Middle East including Turkey, the increase in L. tropica cases may either reflect an increase in the number of patients of Middle Eastern origin who are being tested for Leishmania or that Danish physicians are becoming better at assessing when it is relevant to test for Leishmania based on clinical information and exposure. The opposite trend was observed for L. major as four in every five detected cases were detected in the beginning of the period, 2011–2013.

The areas where L. tropica and L. major occur overlap endemically; in contrast to L. tropica, L. major is not found in for instance Turkey, whereas L. major is endemic in a belt stretching from West and North Africa, across the south-eastern part of the Middle East through Afghanistan and Kazakhstan.

It deserves mention that among the 35 patients in whom T. gondii infection was detected in an eye or lymph node, not a single case included clinical information about immunosuppression, including, e.g., HIV infection. This does not exclude that one or more of the patients were immunosuppressed, but this might indicate that several had a normal immune response, and that their symptoms were therefore consistent with acute toxoplasmosis. Thus, these circumstances underpin that acute toxoplasmosis may occur in otherwise healthy people. Henceforth, physicians are encouraged to state the patients’ immune status when ordering these tests.

At the SSI, it is currently being established if one or more T. gondii genotypes are associated with the development of acute toxoplasmosis.
(C.R. Stensvold, H.V. Nielsen, The Laboratory of Parasitology)