A total of 189 cases of Legionnaires’ disease (LD) were notified with symptom onset in 2015, including 148 cases that were laboratory confirmed in accordance with the EU’s case definition, see below. The median age was 61 years (range 21-99 years). A total of 127 (67%) patients were men. A total of 22 patients died in timely association (no more than 1 month after onset/admission) with LD.

A total of 146 cases (77%) were thought to have been infected in Denmark. Table 1 presents the number and incidence per 100,000 notified cases, by region and area for 2015, and compared with the incidences recorded for the three previous years. 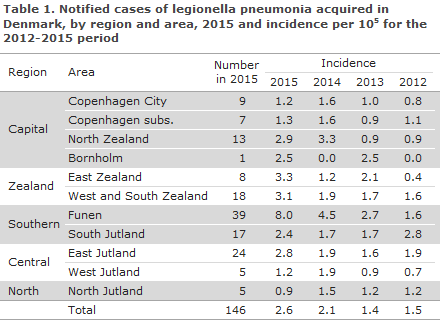 In three of the ten cases, typing results from isolates obtained from the patients and from water samples were in agreement, thereby confirming the source of infection. A total of 10 persons were notified with suspicion of infection from occupational contact to water; none of the suspected sources of infection for these cases were confirmed.

A total of 20 cases with presumed infection via institutions were notified, 13 from hospitals and 7 from nursing homes. Five of these 20 patients died in connection with their legionella infection, Table 2. Thirteen cases were culture confirmed, and in six of these cases, water samples were analysed; the results from the tests confirmed that half of the cases were due to infection from the institutions’ water (a nursing home and two hospitals).

A total of 43 persons were probably infected during travels abroad, one of whom died. Of the 43 persons who had stayed abroad during the incubation period (up to 10 days before onset), 10 had visited Italy, 4 Germany, 4 Spain, 4 Turkey and 4 France. The remaining 17 persons had become infected in 12 different countries, including 5 non-European countries.

A total of 33 cases were notified to the European Centre for Disease Prevention and Control (ECDC) as travel-associated cases. In the remaining 10 cases, information about the stay abroad was insufficient or the persons had taken up private accommodation.

In Denmark, Legionnaires' disease is diagnosed either by culture, detection of Legionella pneumophila antigen in urine (UAg), by significant increase in serum immunoglobulin or PCR. According to the EU’s 2012 case definition, only cases in which the diagnosis is made on the basis of culture, UAg or a significant increase in the antibody level to L. pneumophila serogroup (sg) 1 are considered confirmed cases. PCR and detection of antibodies to other serogroups or species are considered probable cases. Of the 189 LD cases in 2015, 41 cases were positive by PCR only, of which one tested positive to Legionella ssp. (non-pneumophila) only. One case was detected by an increase in antibody level (and PCR) and 69 cases by UAg (without culture).

Legionella pneumophila was isolated by culture from 78 patients. One patient had two episodes of LD in 2015; a different subgroup of serogroup 1 was isolated for each of the two episodes. The distribution of legionella isolates was as follows: 51 L. pneumophila sg 1 (32 Pontiac and 19 non-Pontiac), 13 sg 3, 1 sg 4, 2 sg 5, 4 sg 6, 3 sg 10, 4 sg 15 and in 1 case, the serogroup could not be determined. From this final patient, L. micdadei was also cultured.

Case cluster on the island of Funen

In 2015, many cases of LD were diagnosed on Funen, particularly in and around the city of Odense. Figure 1 presents the number of laboratory-confirmed cases, not counting cases with known travel exposure, from Funen in the period from 2012 through September 2016. The increase from 8 cases in 2012 to 38 cases in 2015 cannot be accounted for by reference to changed diagnostics or monitoring system (see Commentary). Odense University Hospital (OUH) diagnoses the vast majority of Legionnaires’ disease cases on Funen, and for several years, SSI has been informed of any new cases directly from the DCM, OUH.

The SSI's central registration of cases on Funen has thus been largely complete in the entire period. Figure 2 presents the distribution of cases per quarter. Note that the 2015 increase was primarily due to a high number in the 3rd and 4th quarters. 2014 also saw an increase in the 4th quarter, but to a lower level. The increase observed in the 4th quarter of 2015 was mainly due to a presumed outbreak in the Odense area, caused by the same type: L. pneumophila sg 1 subgroup Knoxville, sequence type 9. Nevertheless, this outbreak comprised a maximum of 10 cases (from a total of 20) in the 4th quarter of 2015 and 2 cases in the 1st quarter of 2017 (from a total of 7). See below for a more detailed description of the outbreak. 2016 started out with a high level in the first quarter.

The second quarter was approx. at the normal level, whereas the 3rd quarter was below the level seen in recent years. Overall, Funen has witnessed an unusually high incidence of Legionnaires’ disease from the 4th quarter of 2014 through the 1st quarter of 2016. Currently, it seems that this situation has normalised. At present, the source remains unknown for the many sporadic cases in 2014-2016 and for the specific outbreak in 2015-16. 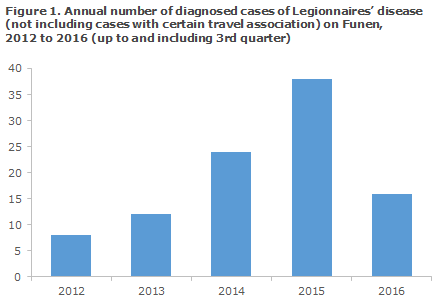 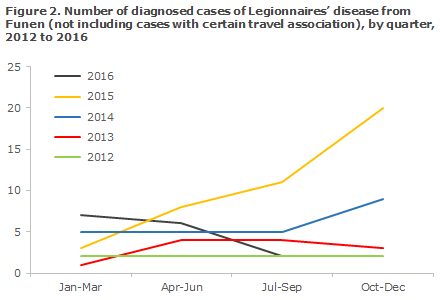 By early November 2015, it had become clear that a cluster of Legionnaire's disease was occurring in people residing in Odense. At the time, four of the cases had been diagnosed with the same subgroup (Knoxville), which was subsequently identified as sequence type (ST) 9. The Municipality of Odense was informed of a presumed ongoing outbreak caused by L. pneumophila sg 1 subgroup Knoxville ST 9.

The SSI and the Danish Patient Safety Authority (then The National Board of Health, Public Health Medical Officers South) investigated the unusual cluster jointly with the Municipality of Odense and the OUH. In the course of October/November 2015, a total of seven patients were detected with the above-mentioned type, and another two patients who were probably also infected with this type.

The patients were six men and three women aged 44-76 years, median age 68 years. Eight of the patients resided in the Municipality of Odense, whereas the ninth patient worked in the centre of Odense daily. All patients were interviewed using a systematic questionnaire on possible Legionella exposures, including private water systems; places of work; visits to the dentist, spa or indoor swimming pool; and other possible exposures and places they had stayed where they might have come into contact with water aerosols in the incubation period. Water samples were taken and analysed for Legionella from the homes of six patients.

The few culture-positive samples contained other legionella types than the one seen in the outbreak. Log files from the district heating company were analysed, but it was not possible to confirm a suspicion that low water entry temperatures was a contributing cause. To pinpoint a possible source of infection in the environment, two mathematical transmission models were used based on geographic mapping of the patients’ movements and whereabouts in the incubation period.

The results of both models indicated that a possible source of infection might be present in an area in South Odense. Two water samples were taken from a wet cooling tower, but both tested negative and the hypothesis of an infection source in the environment could thus not be confirmed on that basis. Water samples were not taken from other possible sources in the area, e.g. other cooling towers, water treatment plants, building sites or water installations such as fountains in the area.

From December 2015 to January 2016, an additional three patients were culture-positive with the outbreak strain (L. pneumophila sg 1 subgroup Knoxville ST 9), including two who resided outside of Odense in the incubation periods. Since then, no further cases have been detected with the strain in question.

2015 witnessed the highest number of notified LD cases seen to date. At 3.4 cases per 100,000 in 2015, Denmark was one of countries with the highest incidence in Europe. Three in every four of the many cases were due to infection in Denmark (146 cases). Overall, Funen has witnessed an unusually high incidence of Legionnaires’ disease from the 4th quarter of 2014 through the 1st quarter of 2016.

Currently, it seems that this situation has returned to normal. The high number of notified cases may, to some extent, be accounted for by a changed monitoring procedure, as described in EPI-NEWS 44/15. The procedure means that the SSI regularly extracts data from MiBa; the Danish Microbiology Database, and in cases in which a notification has not been received shortly after the laboratory diagnosis was made, a reminder is sent to the hospital.

The 189 cases notified in 2015 should be seen on the backdrop that in 2014, according to MiBa extractions, approx. 200 cases were diagnosed, whereof only 157 were notified. Thus, a corresponding increase in the number of laboratory detected cases from 2014 to 2015 was not seen, but a clear increase was seen with respect to the preceding years, EPI-NEWS 44/15. For 2015 it is assessed that all cases diagnosed with legionella infection (culture, UAg, PCR) and meeting the clinical criterion (pneumonia) were, indeed, notified.

Despite considerable efforts, no satisfactory explanation was found either for the many sporadic cases on Funen from 2014 to 2016 or for the Odense outbreak in 2015/16. The investigation of the outbreak was complicated by limited availability in Denmark of knowledge of the location of any possible sources, the location of cooling towers, in particular. Internationally, cooling towers are known to be the most common cause of legionella outbreaks.