Notified cases of legionella pneumonia in 2014

2014 saw a total of 157 notified cases of legionella pneumonia (LP). The median age was 65 years (range 21-98 years), and 95 (60%) of the cases were men. The sex and age distribution thus remained unchanged from previous years when LP also typically affected middle-aged or elderly people and mainly men. Twelve persons died; they had all become infected in Denmark. A total of 118 persons with LP were infected in Denmark. The infection categories of these cases are presented in Table 1. In accordance with Danish standards, all cases with suspected hospital or nursing-home infection were examined and treated locally in the Danish regions.

The distribution of clinically infected cases of LP infected in Denmark by region and area are presented in Table 2. The table demonstrates that, like last year, the highest incidence of notified cases was observed on Funen, whereas East Zealand was once again among the areas with the lowest recorded number of LP cases. 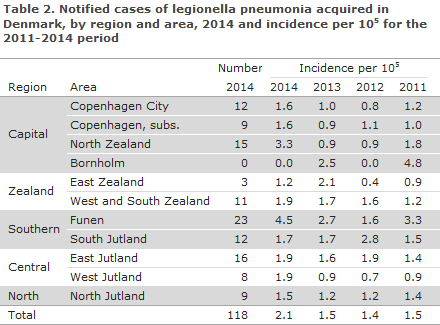 A total of 39 persons with LP are believed to have been infected abroad. The share of travel-associated cases thus comprised 1/4 of all notified cases, which is in line with the level observed in previous years, EPI-NEWS 26/14. Thailand was the country where more people were infected (8 patients), followed by Turkey (7), Spain (5) and Greece (5). From Italy, which has previously often been the country from where the majority of cases have been imported, a total of 3 cases were recorded in 2014.

A certain LP diagnosis requires clinical assessment in conjunction with culture, positive legionella urine antigen test (LUT), titre increase in serum immunoglobulin for serogroup 1 or 3, or by PCR. In Denmark, only the three first methods are accepted as confirmation of the diagnosis.

The SSI receives information about LP cases through the statutory clinical notification system and through voluntary submission of clinical isolates or positive samples (urine and airway samples) and from voluntary reporting of laboratory results. For 2014, the SSI has knowledge of a total of 159 laboratory-confirmed cases, of which 157 were notified. Of the 159 cases, a total of 42 were only detected by PCR, including 4 which were only positive as legionella species (non-pneumophila).

Legionella was isolated by culture from 75 patients. The distribution of legionella isolates was as follows: 49 L. pneumophila serogroup (sg) 1 (32 Pontiac and 17 non-Pontiac), 10 sg 3, 4 sg 5, 3 sg 6, 2 sg 10, 1 sg 15 and in 1 case, the serogroup could not be determined. From two patients L. bozemanae was isolated, from two L. micdadei and from one L. sainthelensi, which has not previously been detected in patients in Denmark. The distribution on serogroups was largely in line with previous years, but relatively fewer serogroup 3 cases were observed: 13% compared with approx. 20% previously.

Comparison of notified cases and laboratory-confirmed cases recorded in MiBa

To establish how complete the existing LP monitoring system is, we compared the notified LP cases with laboratory data from MiBa (the Danish microbiology database) EPI-NEWS 45/13 for the 2011-2014 period. From MiBa we used the following case definition: One or more positive results for, a) culture of legionella species from airways secretions, b) urine antigen test, or c) L. pneumophila PCR of lower airway secretions.

One diagnosis made on the basis of serology alone was excluded from both groups (only few such cases were observed). Overall, we identified 621 cases in the period. A 76% overlap was seen between notified cases and MiBa recorded cases; 5% had only been notified, and 19% were only recorded in MiBa. Data extracted from MiBa were not equally complete for all regions (89-99%); Table 3), which is due to differences in the usage of the PCR analysis results in relation to the MiBa case definition.

Figure 1 shows the number of notified cases and the number of additional cases recorded in MiBa, by year. A 16-22% under-reporting is evident in the course of the 4 years. The most extensive under-reporting was seen in 2014 when a total of 198 diagnosed cases were found compared with the 155 notified cases (2 cases notified on the basis of serology were not included in this calculation).

This is equivalent to an incidence increase from 2.7 to 3.6 cases per 100,000 citizens. With respect to the geographical distribution between the 5 regions, the incidence was higher in the Region of Southern Denmark and lower in the North Denmark Region, with variations in "under-reporting" ranging from 13% (Central Denmark Region) to 28% (Region Zealand), see Table 3.

It should be noted that this analysis has some weaknesses as it has not been possible to employ the exact same case definition on both case sets (notified and MiBa). Likewise, we have no knowledge of the clinical symptoms and test results for some of the cases identified via MiBa, and thus do not know if they had pneumonia. 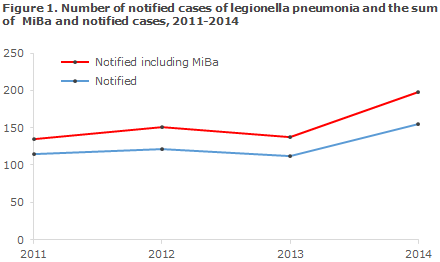 Over the past many years, Denmark has seen a constant LP incidence with approx. 2 cases per 100,000 inhabitants per year. Despite the demonstrated under-reporting, this is among the highest rates in Europe. 2014 saw the highest number of LP cases recorded to date, with a 24% increase with respect to the mean value for the 2011-2013 period.

There is no obvious explanation for this finding, e.g. no outbreaks have been recorded, nor have any particularly pathogenic strain emerged. The share of culture-verified serogroup 1 cases was slightly higher than normally (65% against approx. 60% normally), whereas the number of culture-verified serogroup 3 cases was at a relatively lower level than is normally the case, though the number of cases was in line with the normal level at 10 cases.

Analyses from abroad have shown that the number of LP cases may be associated with climate conditions such as high temperature and high humidity. It remains unknown if these factors have contributed to the increase observed in Denmark. At the European level, 2014 was also the year when the highest number of LP cases to date was reported (6,941) to the ECDC. Part of this increase is due to an unusually large outbreak in Portugal counting 386 cases in October-November 2014.

A more comprehensive monitoring of LP should be based on a combination of clinical information and laboratory findings. Henceforth, the SSI will continuously extract data from MiBa, and in cases for which the notification has not been received shortly after the laboratory diagnosis was made, a reminder will be sent out. We expect that this will ensure a more complete and timely monitoring.
(C. Kjelsø, L. Espenhain, M. Voldstedlund, Department of Infectious Disease Epidemiology, S. Uldum, Microbiology and Infection Control)

Based on WHO recommendations, special recommendations concerning polio (IPV or OPV) booster vaccination have been in place since the summer of 2014 for travels to and stays exceeding 4 weeks in certain countries, EPI-NEWS 27a+b/14 and 26a+b/15.

The WHO re-assessed the polio situation by mid-August 2015 and adjusted the recommendations for some countries, adopting a less restrictive stance, but maintaining the assessment that the polio situation constitutes a public health emergency of international concern (PHEIC). Currently, (booster) vaccination is required in persons who leave Afghanistan or Pakistan after stays exceeding 4 weeks, provided they have not received their latest polio vaccination within 1 year.

In this situation, the Danish authorities recommend that booster vaccination be administered before departure from Denmark, primarily to ensure that the traveller receives a quality-assured vaccine in sterile conditions. As previously, the vaccination shall be documented in the yellow international vaccination certificate.

For all remaining countries where circulating vaccine-derived polio virus (cVDPV) has currently been detected (Chad, Madagascar and the Ukraine), and for countries which are not currently infected with poliovirus, but which remains vulnerable to international spread (Cameroun, Equatorial Guinea, Ethiopia, Iraq, Israel, Nigeria and Somalia), no booster vaccination recommendation is currently in place for persons who have previously received full primary vaccination.

In 2015, an increased demand for IPV vaccination has been observed, and to ensure continued availability, it is important to give IPV polio booster vaccination only to travellers in pursuance of the above guidelines.
(P.H. Andersen, Department of Infectious Disease Epidemiology)