Malaria 2013 and updated recommendations for malaria prophylaxis
Legionnaires' disease associated with travelling abroad and notified to the EU's Centre for Disease Prevention and Control, ECDC, 2003-2013

In 2013, a total of 62 cases of imported malaria were notified by Danish laboratories to Statens Serum Institut (SSI), Table 1.

Figure 1 presents the development in the number of malaria cases imported to Denmark since 1998 by place of infection.

The development in the number of cases of the various species of malaria detected in Denmark since 1998 is shown in Figure 2.

The low number of notified malaria cases in 2013 was in line with the numbers observed in recent years. As previously, the main problem is the risk of serious falciparum malaria in Africa, whereas the risk of falciparum malaria outside of Africa is low. Immigrants visiting their countries of origin constitute the primary risk group.

The low number confirms the receding trend observed since the late 1990s, Figure 1. The decrease in imported malaria cases has been particularly marked for falciparum malaria imported from Africa, Figures 1 and 2; a trend that is mirrored in a number of other Western countries, but vivax malaria also displayed a decreasing trend, Figure 2. The global decrease in the occurrence of malaria, including in Africa, is probably the primary reason for this decrease, combined with the use of more efficient medicinal prophylaxis over the past 15 years.

Despite the generally positive trend, information efforts concerning the use of appropriate malaria prophylaxis remain essential. It is particularly important that such information be given to immigrants and their children, who typically return to their countries of origin for extended periods, sometimes to areas with a considerable risk of malaria.
(L.S. Vestergaard, H.V. Nielsen, Reference Laboratory for Malaria, Microbiology and Infection Control)

As in previous years, a reference group has revised and updated the SSI's recommendations on malaria prophylaxis. In many parts of the world, the occurrence of malaria is receding and with that the risk for travellers, which, in turn, reduces the prophylaxis level needed. In 2014, the following changes were introduced (symbols denoting prophylaxis level and travel groups are used as described in EPI-NEWS 26b/13):

In countries marked with a small letter, the malaria risk only applies in part of the territory and a description of the risk areas is available in Danish under Rejser og Smitsomme Sygdomme at www.ssi.dk/rejser: Chose "sygdomsforekomst = malaria" and place the cursor above the red area. Alternatively, you may click the desired country in the map and select "sygdomsforekomst = malaria" to display a text to the right of the country map describing any risk areas.

Updates to travel vaccination will be published in an upcoming issue of EPI-NEWS.
(P.H. Andersen, Department of Infectious Disease Epidemiology, on behalf of the Reference Group)


Legionnaires' disease associated with travelling abroad and notified to the EU's Centre for Disease Prevention and Control, ECDC, 2003-2013

All cases of legionnaires’ disease for which there is a minimum of one night stay at a hotel or similar within a period of ten days from the stay to symptom onset are notified to the ECDC. If two or more cases are recorded which are linked to the same location within a 2-year-period, the national health authorities of the affected country are to perform a risk assessment and draw water samples which shall be tested for legionella bacteria. This surveillance is in place to detect any sources of infection and to avoid new cases. 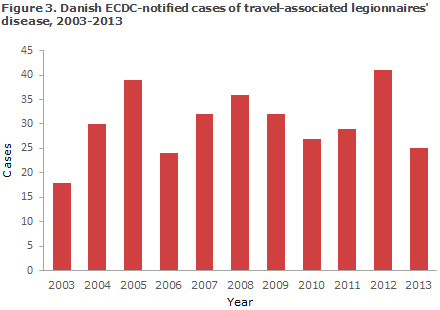 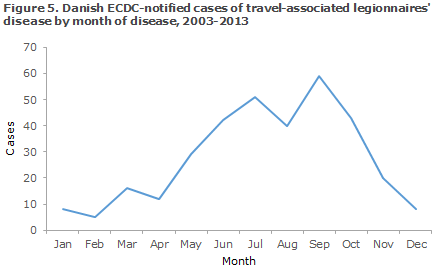 the three types for travel-associated legionnaires’ disease was 78%, 7% and 6%, respectively (based on 135 clinical isolates), Table 2. In the majority of cases, L. pneumophila of serogroup 1 subgroup "Pontiac" is easily diagnosed using LUT; in the other types, LUT may have a poorer or no sensitivity. The standard method for DNA typing of L. pneumophila is sequence-based typing (SBT) of seven gene loci.

In total, 43 different sequence types have been established in the 80 tested isolates from travel-associated cases; the genetic variation is thus very high for this group of isolates because the patients have become infected in a wide range of countries.

The majority of cases had travelled to Italy (78), followed by Turkey (61) and Germany (42). Some stayed in more than one country during the incubation period (e.g. round-trips). Therefore, the number of patients per country is higher than the total number of patients, Figure 6. 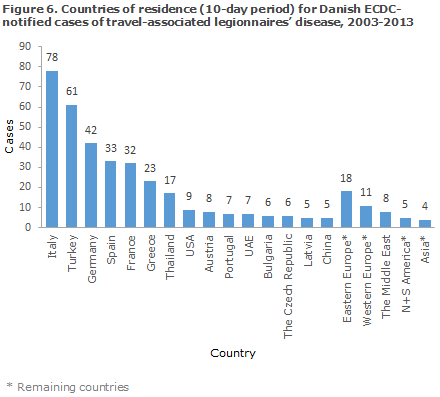 Travel-associated legionnaires’ disease occurs in connection with all types of travel, including normal hotel stays, "all-inclusives", round-trips, cruises and stays at camping areas. Frequently, infection is seen in connection with outbreaks. In 2012, 15 Danes were involved in a total of 9 outbreaks abroad, including 2 in Turkey counting 5 and 3 Danish cases, respectively, EPI-NEWS 41/13.

In 2011-12, 4 Danes were involved in 3 outbreaks; 1 in Thailand counting a total of 6 cases, 1 in Italy counting a minimum of 6 cases (an outbreak in which tourists had lived at different lodgings), and 1 in Austria counting 2 Danish cases, EPI-NEWS 46/12.

About 25% of all Danish cases of legionnaires’ disease are presumably infected abroad. The mortality rate of these cases is approximately 5%. Legionnaires’ disease with presumed infection abroad typically affects middle-aged men travelling to European countries.

In addition to the cases described above, the period saw 24 reported cases associated with travels within Denmark. In some cases, travel information is unavailable because knowledge of the condition is passed on to the SSI so late that investigation is assessed as being irrelevant.

In other cases, travel information is unavailable due to private stays abroad, e.g. family visits. Some travel-associated cases (approx. 14%) could therefore not be reported to the ECDC.

For submission to the ECDC, rapid, precise and detailed knowledge is required about the travel period and the specific dates and places of residence, including hotel names and room numbers for all nights of the travel.

The final determination of the exact source of infection usually requires comparable culture of patient samples and water samples; alternatively, the source may be rendered probable through strong epidemiological evidence in the form of a known cluster and exclusion of other probable sources of infection.
(S. Uldum, Department of Microbiology and Infection Control, C. Kjelsø, Department of Infectious Disease Epidemiology)