In 2015, a total of 102 cases of imported malaria were notified by Danish laboratories to Statens Serum Institut, Table 1.

With regards to presumed country of infection, 90% (92/102) cases were acquired during stays in Africa, 6% (6/102) were acquired in Asia, whereas two cases were reported as having been acquired in Central or South America. No cases were reported from Oceania. As in 2014, an unusually large share of the malaria cases among persons entering Denmark were from Eritrea; 32% (29/92) of all cases from Africa. Several of the affected persons had travelled through Sudan and Ethiopia and then continued their journey via Libya. Information was provided about the death of a Danish traveller to Ghana.

The overall median age for the reported malaria cases was 31 years (range 8 to 69 years). Men comprised 65% (66/102) and women 35% (36/102) of the cases. Disregarding the group of cases imported from Eritrea, the median age was 39 years, whereas the median age among the cases who arrived from Eritrea (a total of 29 cases) was 24 years, predominantly men (72%). The people who entered Denmark carrying malaria from Eritrea had arrived either in 2014 or in 2015, probably as fugitives. One of these cases had become infected with both P. falciparum and P. vivax. 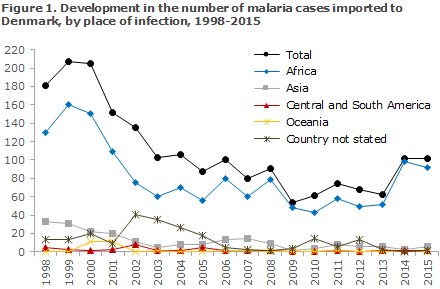 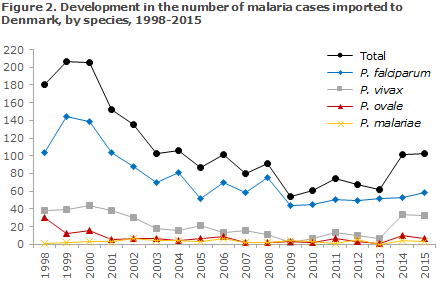 A total of 102 cases were notified, which - in line with 2014 - was considerably above the number of cases that were observed in the previous five years. As in 2014, the 2015 increase may be explained in full by an uncommonly high occurrence of vivax malaria among young male fugitives from Eritrea. Similarly high numbers of malaria cases among fugitives from Eritrea were observed in various North European countries in the same period. Presumably, the travellers were either infected in Eritrea or during their journey to Europe through Sudan or Ethiopia. It is possible that some of the patients have already received malaria treatment with a schizonticidal agent earlier in the course of their illness, but that vivax malaria is now recurring in them due to lacking radical primaquine treatment.

Furthermore, it is possible that several of the fugitives arriving from Eritrea have undiagnosed vivax malaria, which in semi-immune adults may present as a prolonged infection that initially entails only mild and unspecific symptoms, but which may develop into serious disease in the longer run. Furthermore, it is important to be aware that vivax malaria will often present with symptoms only several months after the time of infection, and that the disease cases may therefore be recorded long after the patient has arrived to Denmark. The relevant healthcare workers therefore need to be specially attentive to fugitives from Eritrea who should be allocated relevant and rapid laboratory testing for malaria in case of even minimal clinical suspicion of the condition.

If the numbers are adjusted for the group of refugees from Eritrea, the number of malaria cases notified in 2015 was in line with the low level seen in recent years. As previously, the problem for common travellers is by large the risk of serious falciparum malaria in Africa, whereas the risk of malaria outside of Africa is very limited and mainly due to vivax malaria. Nevertheless, 2015 also witnessed a single case of falciparum malaria imported from India. Immigrants and their children who visit their countries of origin generally constitute the main risk group, as these persons typically stay for longer periods of time and sometimes in areas with a considerable local risk of malaria. Nevertheless, a fatal case of falciparum malaria in a middle-aged Danish tourist who went to Ghana on vacation and who did not take relevant medicinal prophylaxis during the travel underlines the importance of thorough information about the importance of relevant prophylaxis to all travellers to malaria areas.

The Department of Infectious Disease Epidemiology has reviewed the WHO’s latest country-specific recommendations for malaria prophylaxis and updated the SSI's recommendations correspondingly. For 2016 there are no changes in prophylaxis levels, but the following minor changes to risk areas:

China: The Hainan province is no longer a risk area. There is only a risk of falciparum malaria in the parts of the Yunnan province that border on Myanmar. Furthermore, there is a limited risk of vivax malaria in some parts of Tibet.

Columbia: The departments of Guajira and Risaralda are no longer risk areas.

Guatemala: The risk of falciparum malaria is limited to Masagua in the Escuintla department. The risk of the remaining malaria types is greatest in the Escuintla department (particularly in the areas of Gomera, Masagua, Santa Lucia Cotzumalguapa and Tiquisate) and in Alta Verapaz (particularly in the areas of Telemán, Panzós and La Tinta).