In 2014, a total of 102 cases of imported malaria were notified by Danish laboratories to Statens Serum Institut, Table 1.

Among the reported cases from Africa, 33% (32/98) were imported from a single country; Eritrea.

Among the African cases, slightly more than half (55%) were caused by falciparum malaria, whereas 30% of the cases were caused by vivax malaria, which was mainly seen among travellers arriving from Eritrea. The 10 cases of ovale malaria were all from Africa, primarily from West Africa. The limited number of malaria cases from Asia (3) and from South America (1) were all caused by vivax; and as previously, 2014 brought no imported cases of falciparum malaria from Asia.

The majority of the imported malaria cases among travellers arriving from Eritrea were refugees who arrived to Denmark in the second half of 2014. 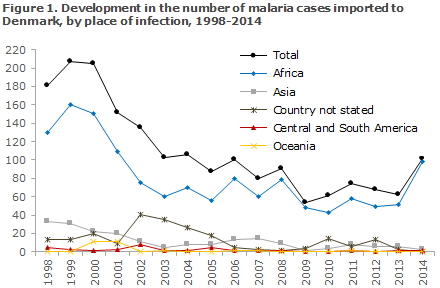 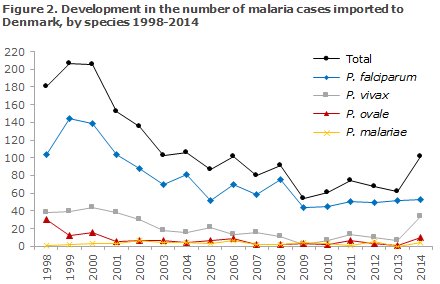 The number of notified malaria cases imported to Denmark increased in 2014 compared with recent years. Thus, a total of 102 cases were notified, which is substantially more than the mean 64 cases notified in the 2009-2013 period. The increase may mainly be explained by an unusually high occurrence of vivax malaria among young male refugees from Eritrea, nearly all of whom arrived to Denmark in the course of the second half of 2014.

The majority of Danish departments of clinical microbiology have notified vivax cases in refugees from Eritrea. Similarly high numbers of malaria cases among refugees arriving from Eritrea were observed in the same period by a number of other European countries, including Sweden and Norway. Presumably, the travellers were either infected in Eritrea or during their journey to Europe through Sudan or Ethiopia.

If the numbers are adjusted for the group of refugees from Eritrea, the number of cases notified in 2014 was in line with the low level seen in recent years. As previously, the problem for common travellers is by large the risk of serious falciparum malaria in Africa, whereas the risk of malaria outside of Africa is very limited and mainly due to vivax malaria. Immigrants visiting their countries of origin constitute the primary risk group.

Despite the generally positive trend, information efforts concerning the use of appropriate malaria prophylaxis remain essential. It is particularly important that such information be given to immigrants and their children who typically return to their countries of origin for extended periods, sometimes to areas with a considerable risk of malaria.

Currently, particular attention is warranted in relation to malaria in refugees who have arrived from Eritrea. The travellers themselves as well as asylum centres should be aware of the malaria risk and the need for additional work-up if relevant symptoms are observed, and treating physicians should ensure relevant work-up and treatment even in cases with a limited suspicion of malaria. It is important to be aware that vivax malaria will often only present with symptoms several months after the time of infection, and that the disease cases may therefore be recorded long after the patient has arrived to Denmark.
(L.S. Vestergaard, H.V. Nielsen, Reference Laboratory for Malaria, Microbiology and Infection Control)

As in previous years, a reference group has revised and updated the SSI's recommendations on malaria prophylaxis. In many parts of the world, the occurrence of malaria is receding and with that the risk for travellers, which, in turn, reduces the prophylaxis level needed. In 2015 the following minor changes apply:

Saudi Arabia: Local transmission in areas bordering on Yemen in the period from September to January. No risk in Mecca and Medina.

South Africa: Malaria risk, primarily falciparum, all year in low-lying areas in the Mpumalanga Province, including Kruger, the Limpopo Province and North-Eastern KwaZulu-Natal. The risk is highest from October through May.

Turkey: Limited risk of (vivax) malaria in the Mardin Province from May through October. As previously, mosquito prophylaxis is only recommended in risk areas.
(The SSI Travel Reference Group)

In 2012, MERS-CoV (Middle East Respiratory Syndrome Coronavirus) was detected for the first time ever in humans who were living or had stayed in Saudi Arabia or on the Arabian Peninsula. Subsequently, approx. 1,300 cases of MERS-CoV have been detected, including 15 cases in Europe following travels to the Arabian Peninsula.

MERS-CoV may lead to severe respiratory infections, particularly in people with underlying diseases. There are several indications that MERS-CoV is a zoonosis (i.e. that the condition is transferred from animals to humans), and that camels/dromedaries serve as a reservoir for the virus. Nevertheless, far from all cases have come into contact with these animals. Transmission also occurs between humans by direct contact or through droplet spreading in connection with sneezes and or/coughing. Human to human infection is primarily observed in hospitals but transmission has also occurred from sick patients to close relatives.

On 20 May, South Korea reported its first-ever case of MERS-CoV in a 68-year old man who had travelled to several Middle-Eastern countries from 18 April to 3 May. The patient, who had not come into contact with dromedaries or sick persons, presented with symptoms on 11 May, and visited a total of 3 clinics/hospitals before being diagnosed. This patient has transmitted the disease to more than 25 fellow patients, healthcare workers and visiting guests (secondary cases). These secondary cases have initiated new chains of infection at clinics/hospitals; and as per 16 June, a total of 154 cases have been notified in the South Korean outbreak of whom 19 have died (12%) and 118 patients remain admitted to hospital. Nosocomial transmission has been documented at 6 different clinics/hospitals.

A risk assessment prepared by the ECDC underlines that import of MERS-CoV from the Middle East to other countries has been described previously. In several instances, imported cases of MERS-CoV have given rise to further transmission of infection, particularly in hospitals. In Europe this was, among others, seen in France and England, without causing comprehensive community transmission. The magnitude of the current outbreak of MERS-CoV infections in South Korea is, nevertheless, noteworthy.

Both the WHO and the ECDC underline that there are no indications that the virus has changed characteristics towards a more infectious or more serious variant than the one known from the Arabian Peninsula. One factor that may have contributed to the comprehensive spreading seen may be a different healthseeking behaviour, as many of the cases visited various clinics/hospitals before being diagnosed. It is also remarkable that the mortality in this outbreak is lower than previously observed. It remains unknown if this is because the outbreak is still in an early phase in which deaths have yet to be recorded, or if more and less serious cases are identified thanks to comprehensive contact tracing.

There are no indications of infection spreading generally in South Korea, and currently no travel restrictions apply for South Korea.
In Denmark, physicians should remain aware of MERS-CoV as a differential diagnosis among travellers from the Arabian Peninsula and countries with MERS-CoV outbreaks. For more information on precautions and diagnostics, please see the theme on MERS-CoV on the SSI's website, www.ssi.dk.
(T.G. Krause, Department of Infectious Disease Epidemiology)