In 2014, Statens Serum Institut (SSI) received a total of 32 notifications of hepatitis A virus (HAV) infection, including 10 women and 22 men. Thus, the number of cases in 2014 had returned to the normal level following a major outbreak in 2013 caused by frozen strawberries, EPI-NEWS 48/13 and 48/14. 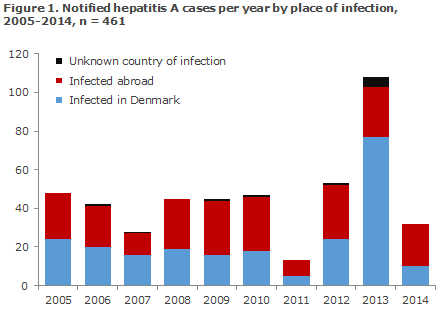 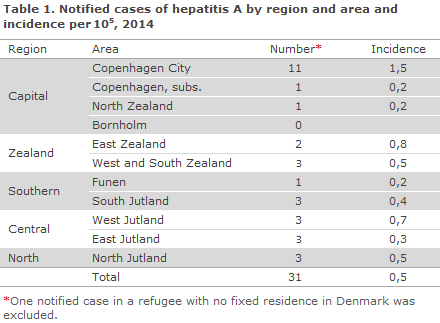 A total of 10 persons had become infected in Denmark (31%). Among these, 9 were of Danish origin (Table 2). A total of 7 persons of Danish origin were reported as having been infected abroad in the following countries: Ethiopia, Guinea Bissau, Greece, Guatemala, Indonesia, the Philippines and Germany. 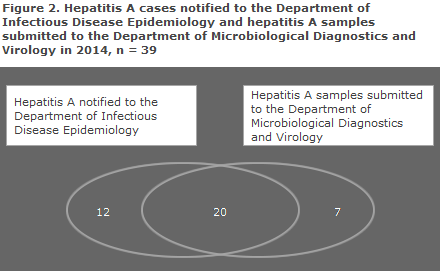 Since 2006, HAV typing has been performed routinely as positive HAV IgM serum samples are submitted to the Section for Virology Surveillance and Research (SVSR), SSI, where PCR-positive samples are sequenced. In 2014, a total of 20 samples were received from the 32 notified patients (63%). Additionally, the SVSR received 7 samples from non-notified cases. PCR analysis of all 27 samples demonstrated that samples from 8 people were negative.

Sequencing of the remaining 19 samples showed genotype 1B in 8 patients, genotype 3A in 6 patients and genotype 1A in 4 patients, whereas one sample could not be genotyped. Genotype 1B was the type most closely associated with infection in Denmark (50%), whereas genotypes 1A and 3A were associated mainly with travel-associated infection (100% and 83%, respectively).

In two situations, the typing results were consistent with further transmission among family members. Sequences identical to the 2013 outbreak were not detected. Nevertheless, two genotype 1B sequences were closely related to those of the outbreak; both were from patients infected in Denmark.

In 2014, the number of persons notified with hepatitis A infection dropped to its normal level following a major outbreak related to frozen strawberries in 2013. This was the largest outbreak of food-borne hepatitis A recorded in Denmark and included 72 notified cases. The specific virus types associated with the outbreak related to frozen strawberries in 2013 were not found in any patients in 2014.

This indicates that the outbreak was effectively controlled through withdrawal of strawberries and aided by the considerable media attention on this topic last year. It is possible, nevertheless, that a limited number of sporadic infections acquired in Denmark may have been caused by frozen berries. Additionally, we observe that children of immigrants continue to become infected in connection with travelling to their countries of origin. General practitioners should be particularly attentive to hepatitis A vaccination in this population group.

It has not been possible to detect HAV by PCR in the 7 samples from non-notified patients submitted to the SVSR. The missing notifications may be due to clinicians determining that the patients were affected by infections other than HAV. Other explanations of the lacking demonstration of virus by PCR may be that the blood sample was taken late in the disease course, after the viraemic phase. Alternatively, patients have been affected by another virus than HAV capable of producing hepatitis-like symptoms and of cross-reacting with HAV-IgM. Finally, IgM detection could be due to vaccination rather than infection.

We encourage continued submission of any HAV-IgM positive samples for virus typing as clinical verification is often not possible before the samples are discarded. PCR for HAV and any subsequent sequencing is provided free of charge. In a country like Denmark where HAV is not in circulation endemically, it is important to test all potentially positive samples to minimise the risk of overlooking outbreaks with only a limited number of cases.
(L. Müller, S. Ethelberg, Department of Infectious Disease Epidemiology, H. Vestergaard, T.K. Fischer, S. Midgley, Microbiological Diagnostics and Virology)

1 December is international World AIDS Day. The objective is to create awareness of the global as well as local fight against HIV and AIDS.

World AIDS Day campaigns are launched annually, internationally and here in Denmark. In Denmark, the Danish AIDS Foundation runs the campaign. Not all campaigns are identical, but they share a common message: HIV is not transmitted through social contact, by eating food prepared by someone who has HIV or by being a colleague to someone who has HIV. And well-treated HIV positives do not transmit the condition. These are messages that need to be repeated again and again. Far too many Danes fear HIV infection for no good reason. This fear causes distancing and prejudice.

Earlier diagnosis for those infected with HIV

For many years, effective HIV treatment has been available free of charge in Denmark. It has been demonstrated that the sooner you start treatment for HIV, the better are your chances of maintaining good health. Additionally, infectiousness is reduced in well-treated persons so that they do not risk infecting others with HIV. Therefore, it is recommended that HIV-infected people be offered treatment as rapidly as possible after being diagnosed.

To offer treatment, the person's HIV status needs to be known, and for that HIV testing is required. Men who have sex with men (MSM) is the group most frequently affected by HIV in Denmark. Among MSM, 37% of those diagnosed with HIV in 2014 or in the first part of 2015 were only tested when their CD4 count had dropped below 350. This means that more than a third of the cases were diagnosed only several years after having acquired the condition, at a point at which their immune system may have been damaged more than if they had been diagnosed years earlier. For heterosexually infected persons, the share reached 67%. The most heavily affected group comprised heterosexually infected immigrants among whom 72% were tested late compared with 53% among heterosexually infected Danes.

Repeatedly, studies among HIV positives have demonstrated that the main reason why people do not test earlier is fear of how other people will react. In other words, the stigma which continues to affect HIV and HIV-positive people plays a part in driving continued spreading of the condition. Fear and stigma mean that more people remain unaware that they are HIV positives. These people do not enter treatment and may therefore transmit the condition to others. It is therefore important to keep repeating the message: HIV is only transmitted in 3 ways; through unprotected sex, through sharing of injection syringes and through mother-to-child infection. And these transmission routes apply only if the HIV positive person is not in effective treatment. People who are well-treated do not transmit the condition.

In Denmark, everyone can ask for a free HIV test with their GP, at a hospital or in one of the special check points for MSM and persons from countries with a high HIV incidence. Furthermore, in the guidelines on HIV testing, the Danish Health and Medicines Authority mentions three groups who doctors should offer testing, even if these persons do not themselves bring up the topic of HIV testing:

Additionally, all pregnant women are automatically offered an HIV test when they attend the first pregnancy check-up with their GP.
(S. Cowan, Department of Infectious Disease Epidemiology)