2013 was characterised by a major hepatitis A virus (HAV) outbreak caused by frozen strawberries from North Africa. A total of 71 Danes were registered with HAV infection as part of this outbreak - 60 hereof were notified in the clinical notification system (Form 1515).

The total number of notified HAV cases was 104, including 50 women and 54 men. Thus, 2013 recorded the highest number of HAV cases since 2004 when a major outbreak occurred among men who have sex with men, EPI-NEWS 52/04.

The development in the number of notified HAV cases, by infection in Denmark and abroad in the 2000-2013-period, is presented in Figure 1. 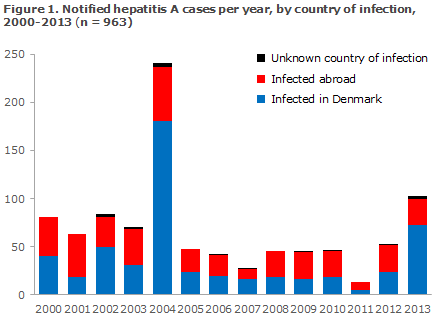 A total of 73 notified cases were infected in Denmark. Among these, 64 (88%) were associated with registered food-borne outbreaks (see the Outbreaks section for details). In the remaining nine cases, the source of infection was stated as infection by family members (1), via foods (4) and unknown (4).

A total of 14 persons of Danish origin were reportedly infected abroad, including 1 case that was related to the Nordic strawberry outbreak and 2 cases that were related to an outbreak that occurred in Egypt (see below). The 11 remaining Danes were infected in Egypt (7), Ghana (2), Jordan (1) and Spain (1). Four persons, who were born abroad, were infected during stays with family and friends in India, Ukraine and Afghanistan and during a tourist or business stay in the US. Eight second-generation immigrants were infected abroad, all in connection with family visits in the following countries: Pakistan (2), Turkey (2), Afghanistan (2), Iraq (1) and Lebanon (1).

In 2013, a total of 3 HAV outbreaks were investigated: one with infection in Egypt and two in which infection was presumably associated with foods sold in Denmark.

Outbreak I:
From November 2012 to March 2013, a hepatitis A outbreak was observed with the HAV genotype 1B and an identical RNA sequence in European tourists returning from Egypt. About 90 persons reportedly formed part of this outbreak, including 9 cases from Denmark, of whom 3 were notified in 2013. The source of infection could not be confirmed, but a joint European study indicated strawberries or mango as the source of the outbreak.

Outbreak II:
In February 2013, Statens Serum Institut (SSI) identified an increase in the number of hepatitis A cases infected in Denmark. Sequencing demonstrated that all the affected persons had been infected with HAV of genotype 1B belonging to two related RNA sequences.

It turned out that Sweden, Norway and Finland recorded HAV cases of the same type. A total of 117 cases were recorded in the Nordic countries, including 71 cases in Denmark. The source of infection was frozen strawberries from North Africa, packaged in Belgium. The outbreak was described further in EPI-NEWS 48/13.

Outbreak III:
In October and December 2013, clusters were reported in two families counting 4 and 2 patients, respectively, all of genotype 1B. The source of infection would not be identified further, but several family members were presumably infected by person-to-person transmission.

Since 2006, HAV typing has been performed routinely as positive HAV IgM serum samples are submitted to the section for Virus surveillance and research, SSI, where PCR-positive samples are sequenced. In 2013, a total of 54 samples were received from the 104 notified patients (52%). The majority of these were of genotype 1B (80%), including 32 cases from the national Danish outbreak caused by frozen strawberries (Outbreak II), 3 from the family clusters (Outbreak III) and 3 from the outbreak in Egypt (Outbreak I).

In four sporadic HAV cases, genotype 1A was found, two cases were 3A and 4 were PCR-negative for HAV. Additionally, the Virology Section received 38 samples from non-notified cases, including 13 PCR-positive samples of genotype 1B (34%); 9 cases could be related to Outbreak II.

All of these cases were sporadic, except for one genotype 1A case that was associated with a major European outbreak. This outbreak counted more than 1,400 HAV cases in 2013-14. The HAV cases were primarily from Italy, but cases were also recorded from another 11 European countries. Like with the concurrent Nordic outbreak, this outbreak was caused by frozen berries.

The number of notified cases with acute hepatitis A infection observed in 2013 was higher than for any other year since 2004. This was primarily due to the major outbreak related to frozen strawberries, which is the largest foodborne hepatitis A outbreak recorded in Denmark to date.

The 2013 outbreak demonstrates that HAV has a considerable outbreak potential in a population with low immunity like the Danish population. This is due to the high infectiveness and the possibility of transferring infection from countries where hepatitis A is endemic, either directly through foreign travels or indirectly via import of contaminated ready-to-eat foods. The outbreaks could be investigated and solved relatively quickly because the reporting of HAV cases was timely, and because blood samples were genotyped and analysed.

In the 20 samples that could not be genotyped, the virus load was too low for genotyping. This is rather common in blood samples, whereas the virus load is typically higher in faeces samples. Quick submission of faeces samples from HAV IgM-positive patients is therefore important for outbreak tracing purposes. As previous years, 2013 brought examples of children to immigrants who were infected while visiting their parents' countries of origin. It therefore remains important that GPs pay particular attention to hepatitis A vaccination in this population group.
(L. Müller, S. Ethelberg, Department of Infectious Disease Epidemiology, H. Vestergaard, T.K. Fischer, S. Midgley, Microbiological Diagnostics and Virology)

1 December is international World AIDS Day. The objective is to create awareness of the global as well as the local fight against HIV and AIDS.

Worldwide, both the number of new HIV cases and the number of AIDS fatalities is decreasing. The numbers, however, conceal considerable disparate trends. Firstly, in some regions of the world, developments show a negative trend and, secondly, the most vulnerable groups have the poorest access to prevention, support and care. In Eastern Europe, particularly in the former Soviet Republics and in the Middle East and in North Africa, the number of new HIV infections is increasing.

Earlier diagnosis for those infected with HIV

In Denmark, free and effective treatment has been available for many years; and in several other areas across the world, the access to effective medical treatment is increasing, not least because the price of HIV medicine is decreasing drastically in these years. It has been demonstrated that the sooner you start treatment for HIV, the better are your chances of maintaining good health. Furthermore, the risk of infection from well-treated people is close to zero. Therefore, it is increasingly recommended that HIV-infected people be offered treatment as rapidly as possible. To offer treatment, the person's HIV status needs to be known, and for that HIV testing is required.

Therefore, UNAIDS (the United Nation's HIV office) launches a new HIV programme called Fast Track Targets. The target is that by 2020, 90% of all people living with HIV shall be diagnosed, 90% of the diagnosed shall be in treatment, and 90% of the treated shall be so well-treated that they cannot pass on the infection. In addition to this 90-90-90 target, the number of new HIV infections shall be reduced by more than 75%, ensuring that 2020 "only" records 500,000 newly-infected people. For 2030, the target is 95-95-95 and an additional reduction to 200,000 newly infected persons. As an important part of the campaign, the number of HIV-infected people who are exposed to discrimination shall be 0 in both 2020 and 2030.

In Denmark, we have already reached the 2020 targets and nearly also the 2030 targets on effective treatment and reduction of infectiousness. We are, however, still lagging behind with regard to the number of people living with HIV without being diagnosed. Here, the estimated share is around 85%. Even though it does not sound like a major challenge to increase the number of HIV-infected people who have been diagnosed by 5-10 percentage points, this target has proven to be the hardest to reach in Denmark.
The Danish Health and Medicines Authority's guidelines on HIV testing on HIV testing identify 3 groups that should be offered testing:

HIV and AIDS on a worldwide scale