This report comprises all cases of laboratory-diagnosed whooping cough detected in Denmark in 2014, by culture, PCR or serology.

The areas of North Zealand and Copenhagen city/suburbs witnessed an increased whooping cough incidence in 2014. Figure 1 shows that the cases were diagnosed mainly in the months of June and July and in October, November and December of 2014. 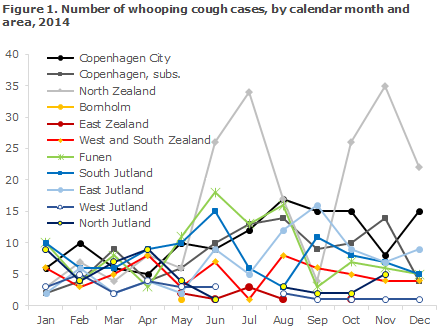 Figure 2 shows that nationwide the incidence was higher in 2014 than in 2013. The peaks in 2014 reflect the high incidence in North Zealand and in the Copenhagen area. 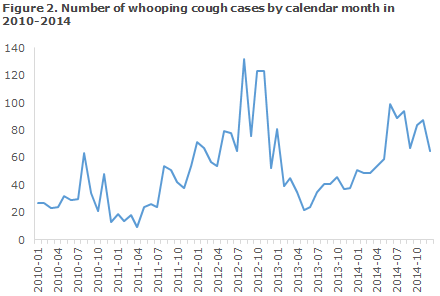 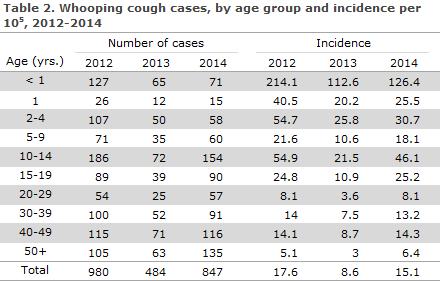 As in previous years, PCR was the most frequently used method, comprising 74% of the total number of detected whooping cough cases. In all, 26% of the cases were detected by serology, whereas culture only comprised 0.1%, as only a single case was detected using this traditional method. Serology can only be used to diagnose patients above 7 years of age. Serology is particularly well-suited for diagnosis of adults, which is reflected in the distribution on diagnostic method by age, Figure 3. PCR and serology complement each other as PCR can only be employed in the beginning of the disease course, whereas serology can be used only after a few weeks with symptoms. 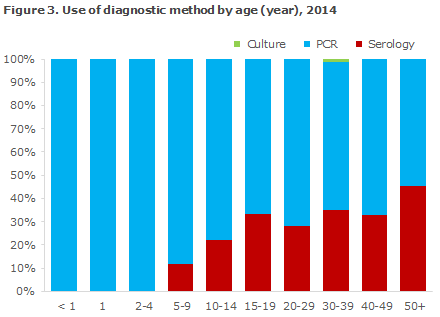 The incidence of detected whooping cough in Denmark was much higher in 2014 than in 2013. Nevertheless, the observed increase obscures a skewed geographical distribution as North Zealand and the Copenhagen area experienced a massive increase as from the mid-summer period, whereas only minor changes were observed in other areas. In 2014, the incidence thus varied across Denmark from 2.5 per 105 on Bornholm to 42.6 per 105 in North Zealand. Differences and changes in regional routines, diagnostic methods and general focus on whooping cough may, however, influence the recorded differences in disease incidence. The disease is still considered to beunderreported, particularly among adults.

As in previous years, the highest incidence was observed among children below the age of 1 year. Children in this age group are poorly protected against whooping cough as they are either unvaccinated or have only received 1 or 2 of the 3 recommended DTaP-IPV/Hib vaccinations for infants (See "Whooping cough in children below 2 years of age" below). The second-highest incidence was recorded in the group counting children of higher age and teenagers aged 10-19 years. The high incidence in this group may probably be explained with reference to the fact that the protection provided by the 5-year booster vaccination tapers out in the course of 4-12 years.Furthermore, young persons above the age of 16 years have not received the booster, which was introduced in 2003/4.

In several other countries across the world, e.g. the U.S., the number of whooping cough epidemics increases, also among younger adults. One of the reasons for this is that the period of protection achieved through vaccination is limited to 5-10 years. In Denmark, the latest nationwide epidemic occurred in 2002 when an incidence of 36 per 105 was recorded.
(T. Dalby, Microbiology and Infection Control)


Whooping cough in children below 2 years of age

2014 saw a total of 90 notified cases of whooping cough in children below 2 years of age, including 49% boys and 51% girls. Reminders were sent out for 22% of the notifications. Small differences between the number of laboratory-confirmed and notified cases < 2 years are caused by different registration and reporting procedures at year’s end.

The age distribution in months for children below the age of two years is presented in Figure 4. A total of 76 (84%) were children below 12 months of age.

Among the 90 notified children below 2 years, 51 (57%) were unvaccinated, whereas eight (9%) had received all three whooping cough vaccinations (DTaP-IPV/Hib). 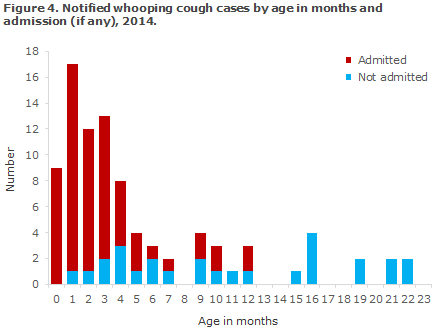 Based on the notifications, no deaths due to whooping cough were recorded in this age group in 2014.

The source of infection was known in 47% of the notified cases in children. Siblings and other household members comprised 34% of the sources of infection.

In 2012, a total of 159 cases of whooping cough were notified in children < 2 years of age, which is the highest number recorded for many years, EPI-NEWS 15/13. In 2013 and 2014, the incidence was in line with the incidence recorded in the 2007-2011 period. Timely whooping cough vaccination of infants in the form of DTaP-IPV/Hib is essential as significant protection against whooping cough is achieved only after two vaccinations. Therefore, the recommended vaccination times at 3, 5 and 12 months of age should be followed, to the extent possible.

Furthermore, a DTaP-IPV booster is recommended at 5 years of age. The motivation for the whooping cough vaccination at 5 years of age is that following the basic vaccination, the child is well protected for some years after which the protection tapers off. Older children who have only received primary vaccination therefore risk getting whooping cough at a later stage and constitute an infection reservoir for younger, unprotected children.

It is to be expected that some children below the age of 2 years will fall ill with whooping cough despite full vaccination and that a preponderance of those who fall ill will be infants below 4 months of age. The vaccine does not provide 100% protection against the condition, but does protect against a serious disease course. None of the eight children who were notified with whooping cough despite having received three vaccinations were admitted to hospital due to the condition.

In unvaccinated or partly vaccinated children < 2 years who are exposed to whooping cough, antibiotic prophylaxis should be considered in accordance with the guidelines described in EPI-NEWS 41/12. Health workers may constitute an infection risk, particularly to smaller children, which was seen in Denmark in 2012 and has also been described in several other countries.
(L.K. Knudsen, P.H. Andersen, Department of Infectious Disease Epidemiology)