This report comprises all cases of laboratory-diagnosed whooping cough detected in Denmark in 2013, by culture, PCR or serology. 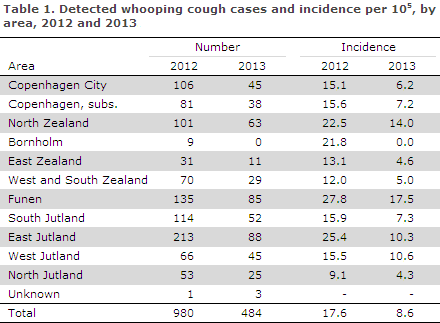 Table 2 shows the distribution by age and sex and age-specific incidence. 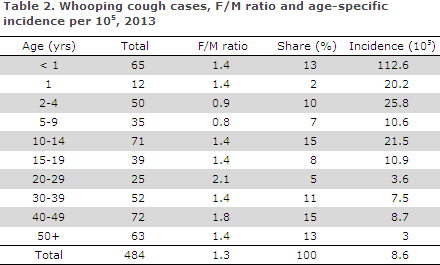 As in previous years, PCR was the most frequently used method, comprising 75% of the total number of detected whooping cough cases. Serology comprised 25% of the detected cases, and culture 0.6% with only 3 detected cases.

Serology can only be used to diagnose patients above 7 years of age. Serology is particularly well-suited for diagnosis of adults, which is reflected in the distribution showing diagnostic method by age, Figure 1. PCR and serology complement each other, as PCR can be employed only in the beginning of the disease course, whereas serology can be used only after a few weeks with symptoms. 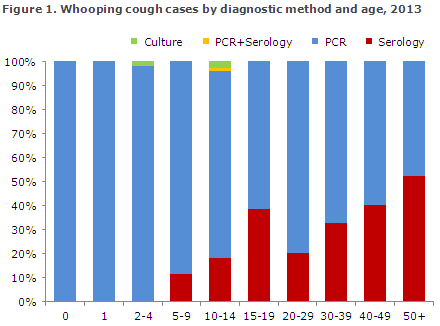 Figure 2 reveals that the increase observed in 2012 levelled out in the first few months of 2013. No significant signs of seasonal variation were seen. Figure 2. 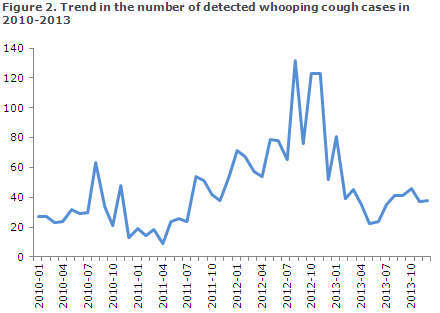 Whooping cough occurs most frequently among 0-year-olds because these infants are not fully vaccinated at 3, 5 and 12 months of age (see below for more information). Immunity after vaccination is assessed to last for 4-12 years, and the relatively high incidence among teenagers is due to the fact that immunity after revaccination at 5 years tapers off for this age-group. Some countries have introduced teenage vaccinations, but, presently, Denmark has not.

In recent years, the number of whooping cough cases among adults has been increasing steadily. This is probably owed to an increased awareness that whooping cough is not just a childhood disease and an associated growing diagnostic attention to whooping cough in adults. The introduction of serology as a diagnostic method has also made it possible to detect whooping cough later in the disease course - i.e. at a time when adults typically see a doctor, e.g. due to prolonged coughing.

2013 saw a small excess incidence of cases in women/girls. In previous years, the gender distribution among children was more even. Previously, a higher number of female cases were also seen. There is no obvious biological explanation for this, but it may be associated with the fact that women have more contact with small children and that women are more likely to see their doctor than men are.
(T. Dalby, Microbiology and Infection Control, L.K. Knudsen, P.H. Andersen, Department of Infectious Disease Epidemiology)

In children below 2 years of age, whooping cough is individually notifiable. Form 1515 is to be used in laboratory-confirmed cases.

2013 saw a total of 73 notified cases of whooping cough in children below 2 years of age, including 62 (85%) children below 12 months of age. Overall, 42% were boys and 58% girls. In 2013, reminders were sent out for 25% of the notifications. Small differences between the number of laboratory-confirmed and notified cases < 2 years are caused by different registration and reporting procedures at year’s end.

Among the 73 notified children below 2 years of age in 2013, 28 (38%) were unvaccinated, whereas 6 (8%) had received three whooping cough vaccinations in the form of DTaP-IPV/Hib. 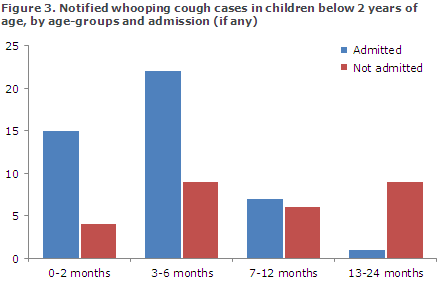 Based on notifications and/or discharge summaries, no fatalities were recorded due to whooping cough in 2013, but according to a notification, one child suffered from severe pneumonia and required respiratory support.

Timely whooping cough vaccination of infants in the form of DTaP-IPV/Hib is essential as significant protection against whooping cough is only achieved after two vaccinations. The recommended vaccination times at 3, 5 and 12 months of age should be followed to the extent possible. Furthermore, a DTaP-IPV booster is recommended at 5 years of age.

In unvaccinated or partly vaccinated children < 2 years who are exposed to whooping cough, antibiotic prophylaxis should be considered in accordance with the guidelines described in EPI-NEWS 41/12. Health personnel may constitute an infection risk, particularly to smaller children.
(L.K. Knudsen, P.H. Andersen, Department of Infectious Disease Epidemiology)