Since May, Statens Serum Institut has sent out reminders to 22,000 parents of children who lack at least one vaccination under the childhood vaccination programme at 2, 6½ and 14 years, according to the Danish Vaccination Register.

Generally, Statens Serum Institut does not provide advice over the phone to citizens concerning the reminder scheme. Parents to children who are 2 and 6½ years old and who have been vaccinated correctly can be referred to the SSI website www.ssi.dk/vac where they can see for themselves which vaccinations have not been registered in the vaccination register; and, if they so prefer, they can also register any lacking vaccinations to the Joint Medicine Card (Danish: Fælles Medicinkort) at www.fmk-online.dk. Parents to children who are 14 years old and who have been vaccinated correctly are not required to do anything and they will not receive any further notifications.

Health personnel may find more information on the reminder scheme at www.ssi.dk/vac and in EPI-NEWS 20/14. Health personnel may contact the Department of Infectious Disease Epidemiology by phone on 3268 3037 for advice on how to adapt the vaccinations given to children to bring them in line with the childhood vaccination programme.

As follow-up to the experiences made over the past months, the SSI will introduce minor changes in the way reminders are generated and worded.
(T. G. Krause, Department of Infectious Disease Epidemiology) 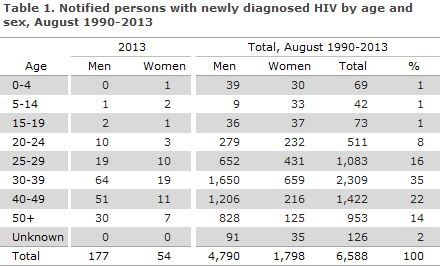 Among the 231 notified cases, 44 had previously been diagnosed with HIV abroad. Among the 44 (25 men and 19 women) persons, 3 were cases of mother-to-child transmission (MTCT), 15 were homosexually infected (MSM), 20 were heterosexually infected (HTX), 3 were infected via IV drug use (IDU) and in 3 cases the mode of infection was unknown.
Furthermore, 8 tourists were notified, 5 men and 3 women; 4 were MSM and 4 were HTX. 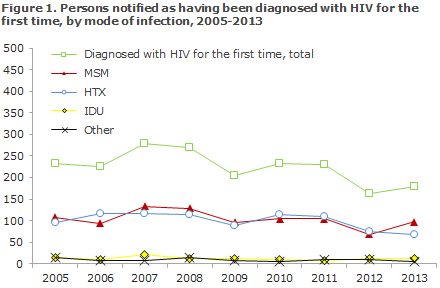 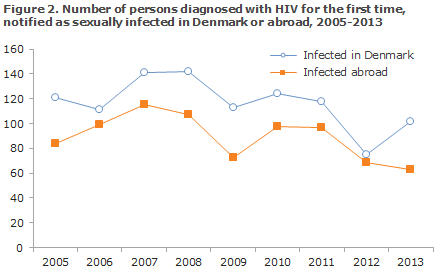 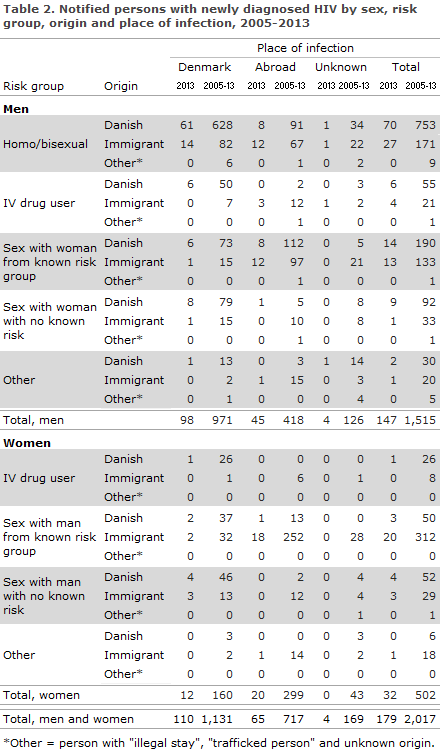 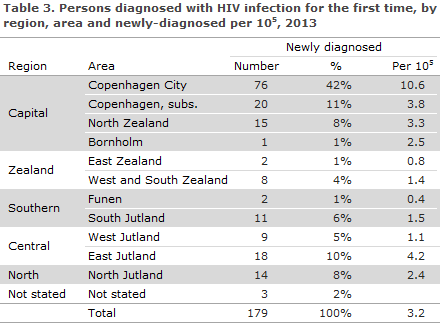 Two children (a boy and a girl) aged 5 and 12 years, respectively, were notified as perinatally infected; both had African mothers. One of the children was tested at the Checkpoint (The Danish AIDS Foundation's test site for MSM and immigrants, where you can be tested for HIV and syphilis without scheduling an appointment and will get the results immediately), and there was no information that the child had been tested previously; the other child was tested at a paediatric department due to symptoms.

Seven of 8 Danish women were infected in Denmark and 1 in Africa. Seven were heterosexually infected, includ-ing 2 who had become infected by a bisexual partner. One was infected via IDU.

A total of 24 immigrant women were notified with HIV. Of these, 23 were infected via HTX, including 5 (22%) in Denmark. Five women (21%) were detected via the pregnancy screening programme, EPI-NEWS 22-23/14. Addi-tionally, 1 immigrant child who was described above in the section Perinatally infected persons.

Among the 179 notified persons who had an address in Denmark and who were diagnosed with HIV for the first time, information on CD4 count at the time of diagnosis was available for 165 (92%). In the remaining 14 cases, CD4 counts were unavailable.

The CD4 count is a marker that indicates how the HIV virus affects the cellular immune response. A CD4 count below 350 cells per µl blood is currently indication for initiation of HAART treatment in Denmark if the patient has not wanted to initiate such treatment earlier.

Among the 165 for whom the CD4 count was stated, there were 85 (52%) whose CD4 count was below 350 cells per µl at their diagnosis, including 7 persons assessed as newly-infected based on primary HIV disease and/or a recent negative HIV test, whereas 80 (48%) had CD4 counts of 350 or above. 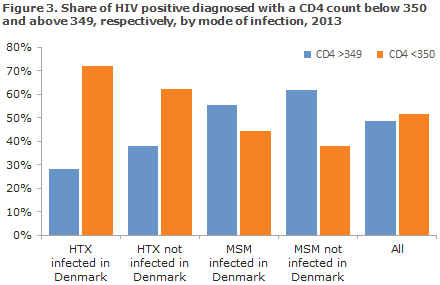 Among 179 newly-diagnosed persons, 25 (14%) were concurrently diagnosed with AIDS.

In 2013, the Section for Virology Surveillance and Research diagnosed 12 new cases of transmitted, resistant HIV, corresponding to 9% of all the tested newly diagnosed patients (129). The rate of transmitted resistance has followed a decreasing trend from 9% in 2009 to 4% in 2012, EPI-NEWS 44/13.

The statement comprises all newly diagnosed HIV patients who are referred to a department of infectious dis-eases and have a genotypic resistance test performed within a year after diagnosis and prior to treatment initia-tion. Between 40% and 50% of the newly diagnosed persons are every year enrolled in this study, correspond-ing to approximately 120 patients annually. Since the study was initiated in 2001, HIV sequences from 1,925 pa-tients have been tested, and mutations causing resistance were found in 119 (6.2%) sequences.

HIV of subtype B in persons with newly diagnosed HIV

HIV of subtype B is the most frequently occurring subtype in Europe, where it is found in 66% of all HIV in-fectees. Furthermore, the occurrence of subtype B varies in Europe with various epidemiological parameters including sex, mode of infection and country of origin. 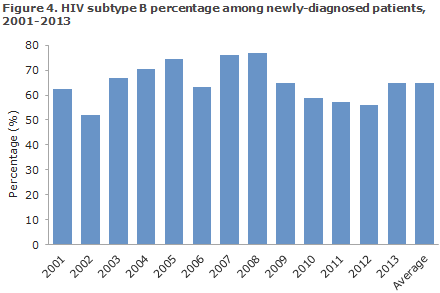 These im-provements were made possible by two improvements of the notification system; first, the introduction of birth date and Soundex name code on the notifications as from 2005 and, now, the introduction of the civil reg-istration number (CPR number) in 2013. The more accurate presentation has, to some degree, come at the ex-pense of comparability with previous years' reports.

The number of reported HIV cases was slightly higher than that observed for 2012, EPI-NEWS 44/13, but, nev-ertheless, lower than the numbers recorded during the previous 8 years.

MSM and immigrants who were infected with HIV by HTX prior to their arrival to Denmark remain the primary infection groups.

In addition to the 2 MSM who have not been notified after testing positive at the Checkpoint, the Department of Infectious Disease Epidemiology knows of at least one person (a child) who was not notified in the course of 2013. This is worrying, because there may be more cases that have not been included in the national monitoring.

We assume that the overwhelming majority of HIV cases are notified, and the stability observed in the number of newly-diagnosed HIV positives since 2005 is striking. This applies to the absolute number as well as to the dis-tribution on infection groups.

The number of immigrants who were infected before their arrival to Denmark cannot be affected by any Danish prophylactic initiative, and the number presumably remains stable owing to a stable immigration from coun-tries with a high prevalence of HIV.

The HIV transmission that occurs in Denmark and which may therefore be changed through Danish prophylac-tic initiatives mainly occurs among MSM. The majority of European countries have seen an increase in the num-ber of newly diagnosed MSM in recent years, a trend that is not presently mirrored in Denmark.

Two factors are in play: how quickly the HIV-infected person is diagnosed and treated; and how many persons the newly infect-ed MSM transmits the condition to before being diagnosed and/or becoming less infectious, as the viral load de-creases following the initial phase which is characterised by a very high viral load.

In Denmark, an equilibrium seems to have been reached. On the one hand, the number of newly diagnosed MSM does not rise. This is seen despite the fact that there are more HIV positive MSM who could potentially increase the infection pressure, but the majority of these MSM are well-treated and therefore much less infectious.

The number of MSM who believe that they have been infected abroad is not sufficiently high to maintain a con-stant number of newly diagnosed persons, but this number contributes to the overall picture.
(A.H. Christiansen, S. Cowan, Department of Infectious Disease Epidemiology, J. Fonager, R. Trebbien, Virology Surveillance and Research)