The number of new cases of Methicillin-resistant Staphylococcus aureus (MRSA) continued increasing in 2013. A total of 2,094 cases were recorded versus 1,556 cases in 2012, Figure 1, corresponding to a 35% increase. 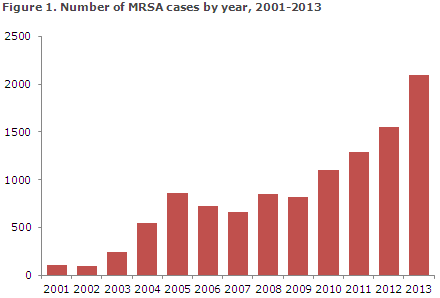 The majority of the MRSA cases were acquired in Denmark, whereas infection abroad was stated in 358 cases (17%). In hospital-acquired cases, the median age was 55 years (range 0-90 years), and in community-acquired cases it was 31 years (0-101 years).

The presumed mode of infection was classified on the basis of epidemiological and microbiological information, Table 1. The number of hospital-acquired cases remained very low (50 cases). The majority of cases were community-acquired and occurred in persons with no known contact to hospitals or nursing homes (821 cases).

In 403 cases (49%), there was known exposure to a person with MRSA, most frequently a member of the household (94%). MRSA cases of the CC398 type are recorded separately as they comprise an ever increasing share of the community-acquired cases and because their epidemiology differs from that of the remaining types. 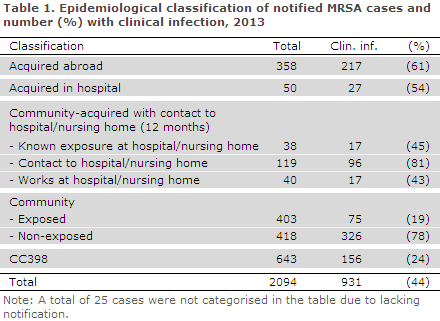 Clinical infection was the cause of sampling in 931 (44%) cases. A total of 41% (842 cases) were established via nasal swabs (screening samples). In 30 cases, MRSA was isolated from blood, corresponding to 1.7% of all S. aureus bacteraemia cases, which is unchanged with respect to recent years.

The 2,094 isolates represented 270 spa types from 24 clonal complexes (CC groups). The two major groups, CC398 (n = 643) and CC5 (n = 275) comprised 44% of the isolates and represented 21 and 36 different spa types, respectively. The ten most frequent spa types comprised 59% of the isolates; among these the two most frequently observed types were t034 (n = 527; CC398) and t002 (n = 161; CC5). Resistance to clindamycin and tetracycline increased compared with 2012 (Table 2), reflecting the substantially increased occurrence of CC398, which is always tetracycline-resistant and frequently (> 90%) clindamycin-resistant.

In 2013, a total of 41 (2.0%) cases of the new mecC MRSA variant initially described in 2010 were detected, EPI-NEWS 47/12. The source and mode of infection were unknown in the majority of the cases. Previously, this type has been associated with probable infection from cattle and sheep.

A total of 15 outbreaks counting 68 MRSA cases were identified. The largest outbreak included 23 cases of spa type t032/CC22 in the Region of Southern Denmark, an outbreak that started in 2012. Another outbreak with spa type t304/CC8 at neonatal departments in the greater Copenhagen area and on Zealand also continued into 2013 comprising 13 cases. A third major outbreak affected DCM Aalborg comprising 11 cases of t13175/CC30.

The number of MRSA cases of the CC398 type, which is closely associated with pigs, increased substantially from 232 cases in 2012 to 463 cases in 2013. The number now accounts for 31% of all MRSA cases. As in previous years, the overwhelming majority, 87%, had direct contact to pigs or were members of households with persons who had contact to pigs. Only 24% had a clinical infection at the time of their diagnosis (40% in 2012), Table 1.

2013 saw a total of 4 cases of MRSA CC398 bacteraemia, including 2 with a fatal outcome within 30 days. In both cases, there was no known contact to pigs. EPI-NEWS 24a/14 presents the MRSA CC398 epidemiology in more detail.

An increase in the number was expected following the amendment of the MRSA guideline, where contact to pigs is now listed as a risk factor, EPI-NEWS 47/2013. This means that persons working with pigs and the households of persons working with pigs are tested for MRSA when admitted to hospital and in connection with any infections that may have been caused by staphylococci. Consequently, more samples will be taken from asymptomatic carriers. The share of cases with a clinical infection among MRSA CC398 cases thus decreased from 40% in 2012 to 24% in 2013.