On the basis of the media attention given to deaths among patients with bacteraemia caused by infection with methicillin-resistant Staphylococcus aureus (MRSA) of the CC398 type ("swine MRSA"), this issue of EPI-NEWS brings an overview of the Danish MRSA CC398 epidemiology covering the 2007-2013 period. In this period, Statens Serum Institut (SSI) received a total of 8,375 notifications and MRSA isolates for microbiological characterisation, including 1,271 (15%) belonging to the CC398 complex.

As mentioned in EPI-NEWS 47/13, the marked increase observed in 2013 and onwards may in part be due to the revised MRSA guideline from the Danish Health and Medicines Authority, which was published in December 2012. The guideline introduced contact with pigs as a risk situation and therefore persons working with pigs and household members of such persons are now tested for MRSA upon admission to hospital. This is supported by the fact that a greater share of the 2013 findings were made in healthy carriers.

Table 2 presents the MRSA CC398 incidence by area. Considerable regional differences are observed, and the incidence is particularly low on Zealand and Bornholm, whereas the CC398 type is predominant in areas with intensive farming, particularly West Jutland, North Jutland and South Jutland. In these areas, the recorded incidences were > 20 per 100,000 inhabitants in 2013. Today, CC398 is the most frequently detected MRSA type in these areas. 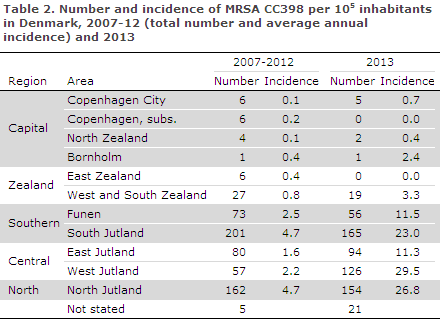 Throughout the period, the share of cases with clinical infection has been lower than that observed for the remaining types of MRSA. In 2013, a total of 24% (156 of 643) had a clinical infection at the time of diagnosis, Table 3. A total of 87% of the cases were found in persons with direct contact with pigs or in household members to these persons.

Bacteraemia due to staphylococci, including MRSA, is monitored at the SSI via voluntary submission from the Departments of Clinical Microbiology. This system has worked since 1960, and it is estimated that approx. 90% of the bacteraemia cases are reported to the SSI. In the 2007-2013 period, staphylococcal isolates from a total of 10,426 bacteraemia cases were submitted, including 145 MRSA cases, Table 4.

Origin and transmission of the infection

Studies of the MRSA CC398 genome and of methicillin-sensitive Staphylococcus aureus (MSSA) CC398 have shown that MRSA CC398 in pigs originated from human MSSA. Originally, CC398 was a normal antibiotics-sensitive human Staphylococcus aureus. From there it has spread to pigs, and in pigs it has become resistant to antibiotics, initially of the tetracycline type and then of the methicillin type. During this evolution, the strain has partly adapted to pigs; and in its present form it is less transmissible from human to human than common human MRSA types are.

However, the strain has maintained the properties that make it pathogenic in humans. Microbiological and epidemiological studies performed in Denmark and internationally unequivocally show that MRSA CC398 is mainly transferred to persons who have direct (occupational) contact to live pigs or to the swine holdings and to their household members.

Even though MRSA CC398 may be found on pork, there is no evidence to indicate that cooking and eating the meat is a source of infection. Thus, only a limited number of MRSA CC398 cases are seen in larger Danish towns, and analytical epidemiological studies have not been able to demonstrate that exposure to pork is a risk factor.

Throughout the years, a share of the cases with no exposure to swine have been reported. As these cases have typically been observed in areas with intensive farming, it is likely that the cases may be ascribed to indirect infection from swine farming.

As is the case for other types of MRSA, a considerable share of the CC398 cases are healthy carriers. The notified cases do not only include MRSA-positive, healthy household contacts, but also a limited number of healthy persons screened in the context of various studies. Despite these biases, it is clear that MRSA CC398 is a bacterial clone that is expanding among persons with contact to swine and in areas characterised by intensive farming.

This is cause for concern. Exactly how many swine holdings are currently infected remains unknown, but presumably the share is high. The Danish Veterinary and Food Administration has tested a total of 200 farms in 2013, and the results of the study are expected to be published later this year. The presumed high prevalence among slaughter pigs is a challenge for infection control.

Overall, there is no evidence to support that MRSA CC398 is more virulent or more infectious than other MRSA types. Furthermore, some studies indicate that the average colonisation period is shorter than that of other types of MRSA. The deaths which have been presented in the media, and which are all described in detail below, have all occurred in persons with serious underlying disease. Unfortunately, deaths like those presented in the media are to be expected, given the increasing number of MRSA CC398 cases in Denmark. In future, we therefore expect further serious manifestations, including invasive disease and deaths, due to infections with this type of MRSA.

Four case stories:
Case 1. A 51-year-old patient with kidney and liver cancer and alcoholic liver cirrhosis admitted with severe burns. MRSA CC398 was detected in swab from skin transplant. Developed sepsis and was started on empirical sepsis treatment, which was supplemented with vancomycin. Blood cultures showed growth of MRSA CC398, and fucidin was added to the antibiotics treatment. The condition deteriorated with multi-organ failure, and the patient died after a week. To our knowledge, the patient had no contact to pig farming.

Case 2. An 86-year-old diabetic with cardiovascular disease and a pacemaker, severe aortic stenosis and toe amputations. MRSA CC398 was detected in an ulcer on the amputation stump. Admitted with bacteraemia. Blood cultures showed growth of MRSA CC398. PET scans were consistent with spondylitis and an oesophageal echocardiography showed possible endocarditis/infection in a pacemaker electrode, after which the pacemaker was removed.

Initially on vancomycin and rifampicin management, but due to an unsatisfactory clinical response, treatment was changed to daptomycin and moxifloxacin. The condition deteriorated with pneumonia and renal failure, and the patient died one month later. The patient had no contact to pig farming.

Case 3. A 63-year-old diabetic in longstanding haemodialysis was admitted with a fever. Blood cultures showed growth of MRSA CC398. The bacterium was also detected in the dialysis access route and in a metastatic joint accumulation. The patient had scan-verified mitral valve endocarditis; and once MRSA had been established, the patient was started on vancomycin treatment, which was subsequently supplemented with rifampicin.

The patient improved briefly on the antibiotics and following surgical drainageof the joint liquid , but relapsed and died after 3 weeks of admission. Despite relevant antibiotics treatment, negative blood cultures were never achieved. The patient had no contact to pig farming.

Case 4. A 74-year-old person living in a nursing-home with hemiparesis and functional dysphagia after previous apoplexy was admitted with sepsis and aspiration pneumonia. Blood cultures showed growth of MRSA CC398. The same bacterium was detected in tracheal secretion.

Upon admission, the patient was started on empirical sepsis management, which was supplemented by vancomycin the day after. Despite relevant treatment, the patient's pulmonary insufficiency progressed and the patient died after four days. The patient had no contact to pig farming.

MRSA CC398 had previously been detected in another resident at the same nursing home.

In connection with the Danish Health and Medicines Authority's guideline on MRSA, a special communication on swine MRSA was prepared. For persons who come into contact with pigs on a daily basis, it makes no sense to attempt removing the carrier state as the affected persons will immediately become exposed to the bacterium again.

In this respect, the handling of the swine type is different from the handling of the remaining types of MRSA in which the carrier state is terminated whereby the risk of developing infections and of spreading the infection is minimised. An underlying premise of the guideline for handling this infection is that persons with MRSA, including CC398, have the same right to receive healthcare as anyone else, and that they may attend e.g. schools and day-care institutions.

The guideline includes advice on how to reduce the risk of transferring the infection from the piggery to the household. For further information, please use the search facilities at the SSI's and the Danish Health and Medicines Authority's websites. The SSI is setting up an advisory function for MRSA CC398 aiming to help those working with pigs as well as healthcare staff and citizens who have doubts about this topic. The function is expected to be fully operational by August 2014.

MRSA CC398 is different from most common types of MRSA as it is zoonotic in nature and is closely associated with direct or indirect contact with the production of pigs (but not foodstuffs).

It therefore has a different age and sex distribution than the remaining types of MRSA, as documented in this issue of EPI-NEWS and elsewhere. On the other hand, it is less infectious from person-to-person and it is rarely found among the MRSA types that have gained a foothold in the hospital setting.

When clinical infections occur, they mainly present as skin infections (e.g. impetigo and broils), just like other staphylococci. Debilitated and recently operated persons are at risk of developing more serious staphylococcal infections, regardless of the type. Despite use of antibiotics, serious infections are still associated with a high mortality, particularly in immunocompromised persons.

Like other new types of MRSA, MRSA CC398 has the potential to spread further into the community, and the strain may change and increase its capacity for person-to-person transmission. But it is also possible that Denmark will soon reach the peak of the MRSA CC398 epidemic and that the incidence of MRSA CC398 will slowly decrease in the future.

Regardless of the scenario that will evolve, the SSI follows the development closely, both microscopically and epidemiologically. In this context, the individual deaths are not the primary point of interest. Risk assessments are made on the basis of all available microbiological as well as clinical-epidemiological knowledge.
(Department of Microbiology and Infection Control and Department of Infectious Disease Epidemiology, Statens Serum Institut)