Next week (no. 17) marks this year's European Immunization Week. During the week, the WHO, the ECDC and the individual member countries will focus on the Childhood Vaccination Programme and challenges associated with this.

This year, the focus in Denmark is on the objective of eliminating measles and rubella by 2015.

The current rubella outbreak in the Silkeborg area, EPI-NEWS 14/13, demonstrates that – at the current level of population immunity – measles virus can still spread when introduced to Denmark.

Below we describe the coverage of the MMR vaccination programme, including the vaccination offer given to adults in 2012, and the process initiated by the member countries of the WHO's Europe Region to ensure that the objective of eliminating the disease may be reached.

MMR Vaccination Coverage at end of 2012

Vaccination coverage was calculated on 10 January 2013 on the basis of person-identifiable data from the national Childhood Vaccination Database.

2011 coverage data were calculated on 16 April 2012; and for this reason alone, the coverage recorded for the youngest years of birth may appear marginally lower than in the previous report, EPI-NEWS 23b/12.

The Database consists of person-identifiable data from General Practioners' (GP) settlements with the National Health Insurance (Sygesikringen). The reported coverage thus only includes vaccinations performed in Denmark by GPs.

There is a 2-3-month delay from a vaccination is administered until it is registered in the database. It is essential that the correct codes are used. For children, the code 8601 is used for MMR1 and the code 8612 for MMR2.

MMR1 and MMR2 may, however, be given at just one month's interval. 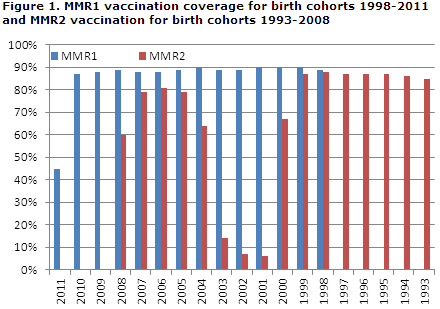 For the 2011 birth cohort (45%), vaccination was expected not to have been concluded at the calculation date. For the 2008-2010 birth cohorts, the lowest MMR1 coverage was seen in the City of Copenhagen, i.e. the municipalities of Copenhagen, Frederiksberg, Tårnby and Dragør. Table 1. 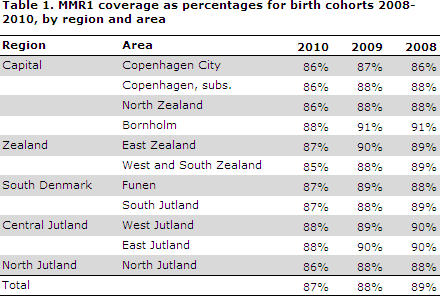 For those who have followed the programme, i.e. the 2004 birth cohort born after 1 April, coverage was 64%. This coverage, however, is artificially low as no correction has been made to adjust for the fact that a fourth of the cohort was not offered MMR2 vaccination.

In the spring of 2012, the Danish Health and Medicines Authority implemented an information campaign targeting parents to children aged 4-5 years.

The campaign focussed, among others, on the importance of vaccination against childhood diseases such as measles, mumps and rubella, EPI-NEWS 17/12.

It is, however, not possible to determine if the campaign contributed to the increase as coverage in a birth cohort is expected to increase with time owing to delayed vaccination.

From 1 April to 31 December 2012, younger adults born in the 1974-1994 period were offered free measles vaccination, provided they had not been vaccinated previously and had not had the disease.

Those who accepted the offer received MMR vaccination, EPI-NEWS 12/12. Preliminary coverage rates were reported in EPI-NEWS 49/12. The total number of vaccines administered is presented in Table 2: 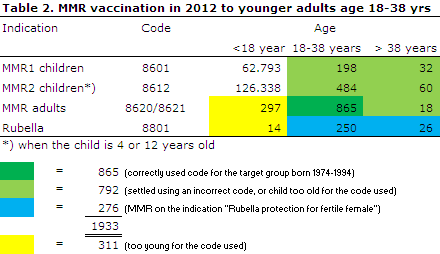 It was assessed that the group of susceptible younger adults counts 70,000 to 100,000 persons, and the catch-up programme therefore had limited impact.

Total coverage in the target group of younger adults aged 18-38 years was 1,547 persons, including 682 (198+484) incorrectly settled with MMR1 and MMR2 child codes, respectively. Additionally, a total of 110 MMR vaccines were given to persons born before 1974.

Finally, a total of 276 women received MMR vaccination on the indication "Rubella protection for fertile female". As presented in Table 2, a total of 311 children were settled with codes made for adults.

MMR vaccination coverage remains low across Denmark, EPI-NEWS 21/11 and 23b/12. As previously, MMR2 coverage was generally lower than MMR1 coverage.

Especially MMR2 vaccination given at four years has not yielded the expected increase in coverage, EPI-NEWS 9/08 and Figure 1. Conversely, the mean coverage is inferior to that observed for MMR2 administered to 12-year olds.

Experience with the temporary, free MMR vaccination offer for younger adults demonstrates that this target group is not easily reached and that the many different settlement codes may be difficult to use correctly in daily practice.

Despite the fact that real coverage may be under-reported (for MMR1 in birth years 2000-2003 under-reporting may be nearly 3-4 percentage points), EPI-NEWS 20/12, the many years with a less than satisfactory coverage and delay with respect to the recommended MMR vaccination time means that the number of unprotected children and adolescents increases continually.

Special measures are needed to increase coverage both within the Childhood Vaccination Programme and possibly also by making permanent the MMR offer targeting adults in order to avoid major outbreaks and to eliminate measles in Denmark in accordance with the WHO objective for the entire Europe Region by 2015.

To fulfil this objective, a constant minimum 95% vaccination coverage for the two vaccines is needed.

2013 alone has seen three documented cases of measles being introduced by travellers from England and Thailand aged 11-37 years.

Elimination of measles and rubella in Europe by 2015

The WHO's Europe Region (WHO EURO) and therefore each of the 53 member countries have agreed on the ambitious objective to eliminate the occurrence of measles as well as rubella (German measles) in the EURO region by 2015.

To reach this objective, each member country needs to ensure that vaccination coverage reaches the necessary level, i.e. 95% or more should have received two MMR vaccinations, and to make available additional vaccination offers for population groups at risk of being susceptible to measles and/or rubella.

Finally, it should be ensured that both healthcare professionals and the population receive evidence-based information and advice on the benefits and adverse effects of measles and rubella vaccination.

The member countries submit annual reports documenting the efforts made. Before submission, the reports are to be assessed by an independent national elimination committee.

The requirement for independence with regard to data collection and analysis is a particular challenge in smaller countries, e.g. the Nordic countries, as the majority of the experts from smaller fields such as measles and rubella are often involved in either the epidemiological, vaccinological or diagnostic data handling.

At the first meeting with the West European WHO countries at the end of January 2013, the idea of setting up a joint Nordic committee was formed by the Nordic group.

It is therefore likely that a joint Nordic elimination committee for measles and rubella will be established counting experts from Island, Norway, Sweden and Denmark.

That the WHO EURO objective is within reach was demonstrated by the WHO's Americas region (PAHO), which declared that rubella had been eliminated from the region as early as September 2010.

In Denmark, rubella is only monitored for childbearing women and congenital rubella syndrome (CRS), and no cases have been notified since 2008.

For this and other purposes, the development of a national laboratory databank with systematic registration of serological analysis is on-going, and the databank will be an expedient tool and a counterpart to the national biological database, MiBa, EPI-NEWS 25/12.

These laboratories continuously validate all quality assured analyses using external control panels and external control of a varying share of diagnostic specimens (both positive, negative and inconclusive tests) performed by the regional WHO reference laboratory in Berlin.

The National Danish Reference Laboratory for Measles and Rubella at Statens Serum Institut receives measles and rubella specimens from across the country, partly for serological testing and subsequent detection of virus RNA by PCR, partly for monitoring of virus types.

All locally tested, positive specimens should be submitted as monitoring samples to the reference laboratory for further characterisation.

The Reference Laboratory reports monthly to the WHO, e.g. the total number of specimens tested for measles and rubella by region and specimen material, the number of positive tests, age and sex and any typing findings.

It is also an advantage to register vaccinations settled with the National Health Insurance even though these are automatically imported with some months’ delay.

This is the only manner in which the vaccinations may be registered with the vaccine name and batch number, as these data are not recorded in the National Health Insurance Register.

It is possible to follow the various medical systems' integration with the DVR at MedCom's website.
Until the DVR is fully integrated into all relevant systems, healthcare professionals have access to DVR information via www.fmk-online.dk or via www.sundhed.dk.