2011 saw 13 notified cases of hepatitis A infection; eight males and five females. The number of notified cases by area and incidence per 105 are presented in Table 1. 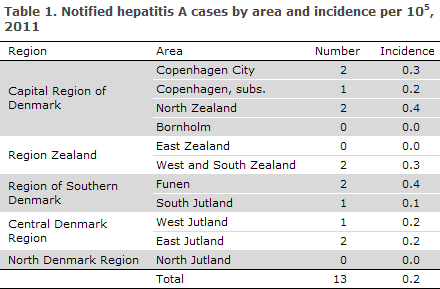 The notified cases by origin and place of infection are presented in Table 2.

Virus typing and confirmation of diagnosis

Hepatitis A virus (HAV) typing has been performed routinely since 2006, as positive HAV IgM serum samples are submitted to the Department of Virology, SSI, where PCR-positive specimens are sequenced. In 2011, specimens were received for four of the 13 notified cases; they were all four PCR-positive. Furthermore, samples were received from two un-notified cases, both PCR positive. The distribution by type was as follows; two cases of 1A, three cases of 1B, and one case of 3A, which concurred with epidemiological information on countries of infection.

Hepatitis A infection is confirmed by detection of virus by PCR in HAV IgM-positive samples. Positive HAV IgM serum samples that are PCR-negative are presumably caused by non-specific reactivity and should therefore be considered as false positive. In 2011, two such cases had a concurrent, laboratory-confirmed cytomegalovirus infection.

The total number of notified acute hepatitis A infections and the incidence for the 2000-2011 period is presented in Table 3. The highest incidence was observed among persons of non-Danish origin < 20 years of age.

In 2011, the number of notified cases of acute hepatitis A reached only a fourth of the cases notified in 2010, EPI-NEWS 40/11. To date, 2012 has seen a total of 42 HAV cases. The very low number of cases observed in 2011 should therefore be seen as an instance of random fluctuation in an otherwise stable incidence. Two of the 15 cases detected at the Department of Virology, SSI, had not been notified. Considerable under-reporting may therefore occur.

Hepatitis A infection in Denmark is to an increasing extent limited to Danish travellers and to children of immigrants visiting their families in the countries of origin and to Danish travellers. These persons may, in turn, transmit the disease in Denmark. It is essential that the vaccinating physicians remain attentive to hepatitis A vaccination in this group. To focus preventive efforts, some European countries (e.g. England) have introduced free vaccination of immigrant children before family visits to highly endemic areas. To prevent further infection, post-exposure vaccine may be used as a substitute for immunoglobulin.

Hepatitis A PCR is used to confirm the serological diagnosis and may also serve to detect virus in faeces. Sequential typing makes it possible to rapidly identify outbreaks, to pinpoint imported cases and to establish possible sources of infection. Consequently, submission of hepatitis A IgM-positive samples for typing is important for monitoring purposes as well as for investigating outbreaks.

As from 1 April 2012, young adults born in 1974 or later have been eligible for free measles vaccination provided they have not previously been vaccinated or had measles, EPI-NEWS 12/12. Measles vaccination is offered in the form of the MMR vaccine, which also protects against mumps and rubella. Vaccination is given at the GP's or at a vaccination clinic which has agreed with the Region to provide such service. The offer expires on 31 December 2012.

Measles is one of the most infectious viruses in existence. A minimum of 95% of the population therefore needs to be immune to avoid circulating virus and outbreaks. This goal has not been met for any birthcohort since the introduction of the vaccine in 1987, and a considerable number of non-immune young adults has therefore accumulated in the population; estimates range in the order of 100,000 persons.

So far, coverage of the temporary, free MMR vaccination offer has been modest. The WHO's objective is the elimination of measles - and rubella - from the European region by 2015. This objective will prove hard to achieve in Denmark unless the MMR vaccination coverage increases both among young adults and in the Childhood Vaccination Programme, EPI-NEWS 23b/12.
(P.H. Andersen, L.K. Knudsen, Department of Infectious Disease Epidemiology)