The number of new cases of methicillin-resistant Staphylococcus aureus (MRSA) continued increasing in 2012. A total of 1,556 cases were recorded versus 1,293 cases in 2011, Figure 1, corresponding to a 20% increase.

The majority of the MRSA cases were acquired in Denmark, whereas infection abroad was stated in 324 cases (21%). In hospital-acquired cases, the median age was 66 years (range 0-95 years), and in community-acquired cases it was 32 years (0-100 years).

The presumed mode of infection was classified on the basis of epidemiological and microbiological information, Table 1. As something new, all MRSA cases of the CC398 type have been recorded separately as they comprise an ever increasing share of the community-acquired cases and because their epidemiology differs from that of the remaining types. 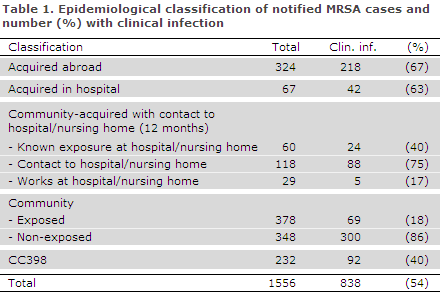 The number of hospital-acquired cases remained very low (67). The majority of the community-acquired cases occurred in persons with no known contact to hospitals or nursing homes (726 cases). In 378 cases (52%), there was known exposure to a person with MRSA, most frequently a member of the household (95%).

In 838 cases (54%), clinical infection was the reason why sampling was performed. MRSA was most frequently detected from skin and sores, 649 cases (77%). In 18 cases, MRSA was isolated from blood, corresponding to 1.2% of all S. aureus bacteraemia cases, which is unchanged with respect to recent years. 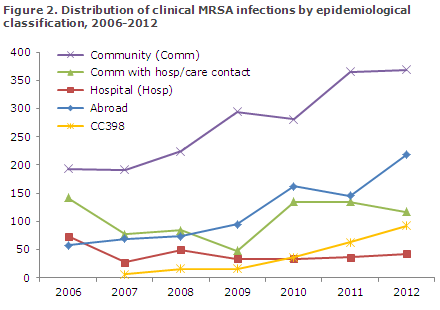 2012 saw a substantial increase in the number of persons infected with MRSA CC398; a special type closely associated with pigs. The number increased from 164 cases in 2011 to 232 cases in 2012, corresponding to 15% of all MRSA cases. A total of 40% had a clinical infection at the time of diagnosis (38% in 2011), Table 1, and 84% of the cases were detected in persons with direct contact to pigs or in members of their households.

A total of 17 outbreaks counting 127 MRSA cases were identified. The largest outbreak included 57 cases of spa type t032/CC22 in the Region of Southern Denmark, primarily at the hospitals of Kolding and Sønderborg. Another large outbreak occurred at neonatal departments in the greater Copenhagen area and on Zealand; this outbreak counted 29 cases (spa-type t304/CC8).

For further details, please see the 2012 DANMAP report, www.danmap.org. Resistance to kanamycin decreased compared with 2011. Other than that the resistance pattern mainly remained in line with that observed in 2011, Table 2. 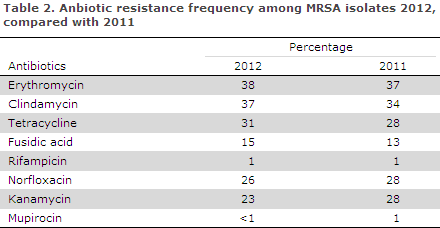 In 2012 a total of 24 (1.5%) cases of the new mecC MRSA variant initially described in 2010 were detected, EPI-NEWS 47/12. The source and mode of infection were unknown in the majority of cases. Previously, this type has been associated with probable infection from cattle and sheep.

The number of new MRSA cases continued to rise and was higher in 2012 than any other year since the mid-1970s. Despite this trend, the number of hospital-acquired cases remained low which indicates that the Danish Health and Medicines Authority's 2006 guideline, which was revised in 2012, remains effective. Both the number of community-acquired and imported cases increased. The large number of different spa types indicates that MRSA is frequently imported to Denmark and that spreading to household members is limited.

In 2012 the previously observed increase in the number of cases associated with pigs continued. These cases now comprise 15% of all new cases in Denmark and in some regions as much as 45%. The increase in the number of recorded cases is expected to increase in 2013, as a greater number of pigs are expected to have been colonised and as the MRSA action plan has been revised so that it now includes pigs as a risk factor. This means that persons working with pigs and their households should be tested for MRSA when admitted and in connection with any infection that may have been caused by staphylococci.

The revised MRSA guideline was released in November 2012. The main objective of the first version of the MRSA guideline from 2006 was to limit the number of new MRSA cases at hospitals.

The new guideline takes into account the changed MRSA spreading pattern and the experience gained from using the guideline from 2006 onwards. The aim of the revised guideline is to sustain the results achieved and to simplify the clarification of risk situations for possible MRSA cases. Furthermore, the revised guideline takes into account the experiences gained to date with the so-called pig-related MRSA and the fact that MRSA now to a large extent is found outside hospitals.

The recommendations in the guideline governing hospitals have become less strict with the revision, particularly those concerning isolation of patients. For example, only patients with known MRSA or patients transferred from hospitals abroad need to be confined to isolation rooms until swab results are known. A new section on pregnant women has been added. It states, among others, that pregnant women with MRSA can attend group events at hospitals, including antenatal education, with no need for special precautions (only general hygiene precautions).

The guideline also includes a simplification of the principles governing follow-up in MRSA positive persons. To take an example, for a patient to be declared free of MRSA, negative cultures shall now be available 6 months after treatment was concluded. A limited number of exceptions apply; these are described in the guideline.

Furthermore, a new section has been added on MRSA in neonates and young children up to 2 years of age. In this context, it is important to stress that eradication treatment is rarely recommended in the child and other members of the affected household.
(A. Petersen, A.R. Larsen, R.L. Skov, Microbiology and Infection Control, L.K. Knudsen, P. Valentiner-Branth, Department of Infectious Disease Epidemiology)