The majority of the MRSA cases were acquired in Denmark; infection acquired abroad was stated in 253 cases (20%). The median age was 52 years (range 0-95) for hospital acquired cases and 32 years (0-97 for community acquired cases. 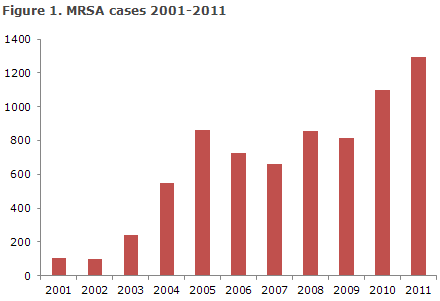 Epidemiological classification of notified MRSA cases based on presumed mode of acquisition assessed on the basis of epidemiological and microbiological information is presented in Table 1. 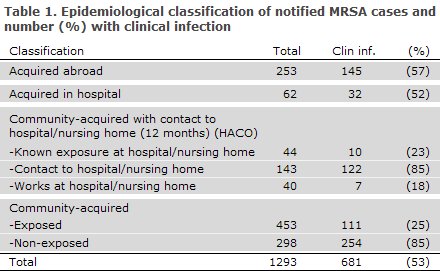 A total of 751 cases (58%) had community-acquired MRSA and no known contact to hospitals or nursing homes. Among these, 453 cases (60%) had been exposed to MRSA, primarily from a family member (65%) followed by exposure from pigs directly or indirectly (CC398, 33%, see below), Table 1.

Among the cases with clinical infection, MRSA was primarily detected in skin and soft tissue (539 cases (79%)). In 21 cases, MRSA was isolated from blood, corresponding to 1.4% of all Staphylococcus aureus bacteraemia cases, which is unchanged with respect to last year.

In 544 (81%) cases, information on predisposing factors was available, the primary factors being: ulcers (208), chronic skin conditions (76) and foreign objects such as drains, urinary or IV catheters (56). 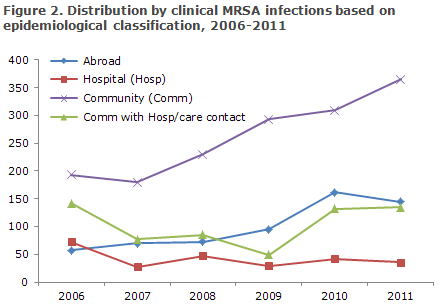 Resistance to erythromycin and clindamycin decreased with respect to 2010 levels, whereas the remaining resistance pattern mainly remained in line with that observed in 2010.

2011 saw a marked increase in the number of persons infected with MRSA CC398, which is closely associated with pigs (164 cases, versus 109 in 2010). In 24 cases, the affected persons had neither had direct contact with pigs, nor had anyone in their household.

In 2011, a total of 37 (2.9%) cases of the new mecC variant only described in 2010 were detected. Furthermore, in 2011 the source and mode of infection was unknown in the majority of cases, only a limited number of persons had any association with cows and sheep.

The number of new MRSA cases kept increasing in 2011, reaching the highest number recorded since the mid-1970s. The number of hospital-acquired infections remains low, reflecting that the 2006 MRSA action plan is effective. In contrast, a rise is seen in both the number of community-acquired and imported cases. The large number of spa types seen indicates that MRSA was imported repeatedly to Denmark, and then spread, typically within a household, but also to a lesser extent to the surrounding community.

2011 also observed a considerable increase in the number of cases associated with pigs. These now comprise 13% of all new cases in Denmark and in some regions as much as 30%.
(A. Petersen, A.R. Larsen, R.L. Skov, Microbiology and Infection Control, L.K. Knudsen, Department of Infectious Disease Epidemiology)

New guideline on the prevention and spreading of MRSA

On 15 November, the Danish Health and Medicines Authority introduced a revised guideline on the prevention and spreading of MRSA. The primary changes are summarized in an introductory chapter. The mandatory notification introduced in 2006 remains in force.

The new guideline takes into account the changed MRSA spreading pattern and the experiences gained from the use of the guideline from 2006 onwards. The new guideline is less strict and more simple in a number of respects, e.g. with regard to the situations in which admitted patients are to be isolated. The guideline was also extended in some areas, e.g. recommendation of follow-up samples of household contacts who have been offered decolonization treatment. Finally, daily work with living pigs was added as a risk situation. The risk situation includes both the person working with pigs and any persons of his/her household. This means that such persons should be tested for MRSA when admitted to hospital and in connection with any infections possibly caused by staphylococci.

The guideline targets the management and staff of the entire healthcare and nursing area, e.g. hospitals, including private hospitals, the nursing sector, municipal health services and any clinics not located at hospitals, including those of general and specialised physicians, dentists, chiropracticians, podologists, etc.

The guideline is available at the homepage of Retsinformation, www.retsinformation.dk, and of the Danish Health and Medicines Authority, www.sst.dk. The guideline was published along with a series of appendices which may also be downloaded individually from the Danish Health and Medicines Authority's homepage. As previously, the guideline is accompanied by a total of four specific hygiene appendices which were also revised. These appendices describe general infection hygiene and supplementary MRSA guidelines for use in hospitals nursing homes and similar organisations, home care and clinics not located at hospitals. The four hygiene appendices are available for download at the Statens Serum Institut's homepage.