Healthcare professionals are encouraged to remain attentive to the new coronavirus as person-to-person transmission has now been demonstrated in families and at hospitals in European countries and on the Arabian Peninsula and nearby countries.

The WHO has coined the new virus MERS-CoV (Middle East Respiratory Syndrome Coronavirus).

If a patient meets the below criteria (case definition), GPs and emergency call service physicians should confer by phone with their local infectious medicine department to determine the need for referral for clinical assessment, isolation and sampling:

The patient shall have stayed on the Arabian Peninsula or nearby countries within the previous ten days, or within the past ten days have come into contact with a person with suspected or confirmed MERS-CoV infection

have an acute and severe respiratory infection OR have another serious infection and underlying chronic disease (possibly in conjunction with immunosuppression).

Travellers to the Arabian Peninsula and nearby countries shall also remain attentive to the condition.

Travellers to the affected areas should observe standard hygiene recommendations, including good hand-hygiene, and they should avoid close contact to animals (particularly animal excretions and secretions, e.g. saliva and faeces).

It should be stressed that the risk of infection for travellers is considered to be very low and that no travel restrictions have been introduced.

For further information, see the webpage of the Danish Health and Medicines Authority, www.sst.dk.

Vaccination coverage was calculated as per 10 January 2013 on the basis of person-identifiable data from the national Childhood Vaccination Database.

There is a 2-3-month lag from a vaccination is performed until it is recorded in the Vaccination Database. Vaccinations administered after mid November 2012 are therefore not included in this report.

Consequently, for this reason alone, coverage at the end of 2012 may appear marginally lower.

The reported coverage provides a minimal estimate, among others because only vaccinations performed in Denmark by GPs are included. Furthermore, a certain under-reporting to the Childhood Vaccination Database has been shown, EPI-NEWS 20/12.

Vaccination coverage was recorded using the administrative service codes indicated by GPs when settling the first, second and third DTaP-IPV/Hib vaccinations, EPI-NEWS 6/10 and 9/10.

In cases where GPs used the same vaccination code at all three vaccinations of the same child, the codes have automatically been changed to include the missing codes.

As in previous years, the codes settled using a parent's civil registration number were ascribed to the child whose age corresponded to that recommended for the vaccination in question.

Among the entire 2012 birth cohort, a total of 59% had received the first and 4% the second DTaP-IPV/Hib vaccination. The lower coverage observed for these vaccinations was expected as vaccination of this cohort had not been concluded at the calculation date.

Furthermore, the earlier calculation date contributes to the lower coverages compared with the previous report, EPI-NEWS 23a/12.

For the 2010 birth cohort, the coverage of the first two vaccinations has increased by one and two percentage points, respectively, compared with the previous report, EPI-NEWS 23a/12.

Coverage for 2005, for example, increased by two percentage points compared with the previous report, EPI-NEWS 23a/12. 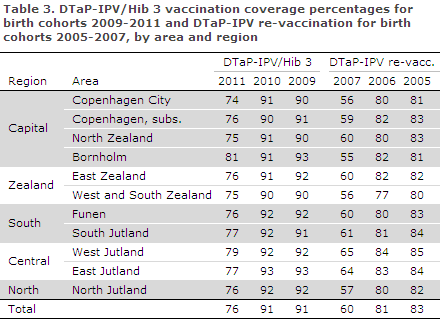 Data detailing coverage at the municipal level are available at www.ssi.dk/data as figures and map views.

It is possible to filter the data provided by gender, relevant birth years, municipality and area.
Coverage at the municipal level will be sensitive to the size of the municipality.

The current coverage is equivalent to about four in every five children being re-vaccinated at five years of age. Although the coverage is a minimal estimate, the DTaP-IPV re-vaccination coverage remains less than satisfactory.

Previous studies have demonstrated that vaccination coverage is lower among children of very young mothers and mothers > 30 years, children of single parents, children who have many siblings and children of non-Danish origin, EPI-NEWS 20/11.

Furthermore, vaccination coverage in Copenhagen is lower than that observed in the rest of Denmark. This observation has also been made for other vaccines; yet, we have no clear explanation why this is so.