In 2011 the TB diagnosis was confirmed by culture with subsequent species determination in 271 of the 380 (71 %) notified cases, including 94 of the 129 (73%) cases in Danes and 177 of the 251 (71%) cases in immigrants. A single Mycobacterium bovis case was observed in an immigrant from Morocco, and an M. africanum case was detected in an immigrant from the Ivory Coast. The remaining cases (269) were caused by classic M. tuberculosis. Among 18 (17%) of the 109 notified cases that were not confirmed by culture, 17 cases had a positive PCR and one person had a positive microscopy. In three of the 17 PCR positive cases, the diagnosis was made on paraffin-embedded (dead) tissue and therefore samples were not cultured. The remaining 14 PCR-positive cases were culture-negative. On the basis of the EU disease definition, EPI-NEWS 51/09, a total of 273 (72%) were confirmed cases, 16 (4%) probable cases and 91 (24%) were possible cases.

Drug resistance results were available for all 271 culture-verified cases.

A total of 257 of these cases were notified with TB for the first time, including 91 Danes and 166 immigrants. Among those notified for the first time, isoniazid mono-resistance was detected in nine (4%) patients, including two Danes and seven immigrants. A single case of poly-resistance was detected (isoniazid and ethionamide) in a female born in Vietnam. Additionally, two cases of multidrug resistant (MDR) TB were detected.

MDR is defined as resistance to the two main antibiotics, isoniazid and rifampicin, and to any other antibiotics. All three MDR cases were detected in immigrants. A young Ukrainian female with MDR TB had a microscopy-negative pulmonary TB. Furthermore, the patient's bacteria isolate was resistant to ethambutol and streptomycin. No other patients in Denmark had the same type of bacterium (MIRU-VNTR). It was therefore assumed that the patient had been infected in her country of origin. A younger Indonesian-born male from North Jutland with MDR TB had infectious pulmonary TB.

In 14 patients with positive culture, information on previous TB was provided; this group comprised three Danes and 11 immigrants. No resistance was detected in any of these patients.

After observing a decrease in the total number of annually notified TB cases over a series of years, the TB incidence has followed an increasing trend as from 2009, EPI-NEWS 50/12. Additionally, systematic typing of bacteria from TB patients with positive cultures from 1992 onwards has demonstrated that a single chain of infection, "C2/1112-15" (previously cluster 2), keeps growing. C2/1112-15 is now, by far, the most comprehensive Danish chain of infection. In 1992 there were a total of five C2/1112-15 cases. Presently, a total of 60-70 annual C2/1112-15 cases are detected, and more than 700 cases have been recorded since 1992. During the initial ten years, the overwhelming majority of the cases detected in the C2/1112-15 chain of infection were Danish, but recent years have seen an increase in cases among Greenlanders resident in Denmark and a limited number of foreigners, Figure 1. 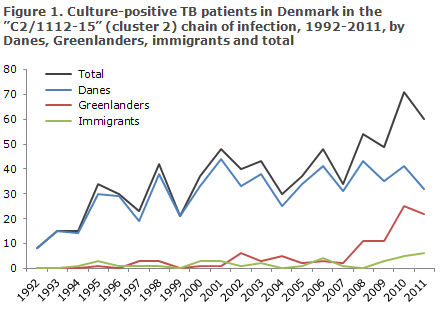 Furthermore, the chain of infection has spread to Greenland. Many of the C2/1112-15 patients are Danish and Greenlandic males with an excess incidence of social problems and abuse issues. It is assumed that they tend to turn to the healthcare system late. Late diagnostics entails that many of these TB patients may infect others before treatment can be initiated. The fact that this chain of infection remains intact is among the primary causes sustaining the current TB incidence level in Denmark.

A TB incidence among Greenlanders in Denmark in the order of 463/100,000, EPI-NEWS 50/12 and a continued increase in the number of cases in the C2/1112-15 chain of infection demonstrate a need for increased awareness of TB control in Denmark. Extraordinary efforts are needed in TB risk environments, for example like the 2012 initiative to screen sputum from persons belonging to TB risk environments in the Copenhagen area. Furthermore, infection tracing and contact tracing should always be performed in accordance with the guidelines outlined in the national TB programme.

The Danish Health and Medicines Authority's new guideline on prescription of antibiotics came into force on 15 November 2012. On 10 December 2012, the following amendments were made: The guideline only includes systemic antibiotics (Chapters 3 and 4) on meningococcal disease (Section 5.3) and epididymitis (Section 5.2).

The antibiotics guideline targets physicians and managements in primary healthcare, at hospitals and relevant clinical societies, universities, pharmaceutical committees, administrators, etc. The guideline should be reflected in any current guidelines, textbooks, local inctructions, etc. Generally, antibiotics should be used cautiously. The Danish Health and Medicines Authority therefore aims to tighten the indications for use of antibiotics and to ensure that pharmaceuticals are used that rarely cause development of resistance.

As the disease pattern and the diagnostic possibilities in general practice and at hospitals vary greatly, the provisions relevant to each healthcare sector vary accordingly. However, the guideline initially introduces a general set of provisions which govern all physicians' prescription of antibiotics. When antibiotic treatment is considered life-saving, it should, naturally, be initiated without delay. The guideline therefore primarily aims to limit any ineffective and unnecessary treatment.

The basic provisions governing all physicians' prescription of systemic antibiotics are as follows:

The Danish Health and Medicines Authority has received advice from a working group under "the Danish Antibiotics Council", and aims to expand such counselling in line with the development of resistance.

The antibiotic guideline and the latest version of the MRSA guideline are expected to be translated into English in the near future. The antibiotics guideline is available at the webpage of the Danish Health and Medicines Authority www.sst.dk

Targeting the general population, Statens Serum Institut, the Danish Medical Association, Danish College of General Practitioners, the Danish Health and Medicines Authority and the Danish Ministry of Health have established a joint homepage on antibiotics and resistance. The page, among others, provides answers to the following questions: When are antibiotics needed and when are they not? Why is it important to use antibiotics only when needed? For further information, please see www.antibiotikaellerej.dk (in Danish).