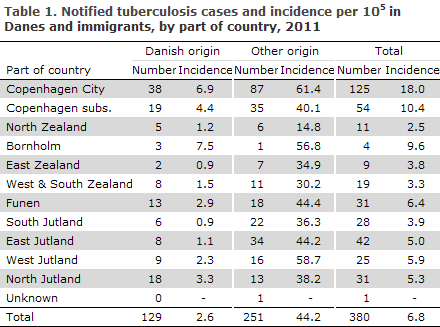 Table 2 shows the distribution by TB localization and origin. 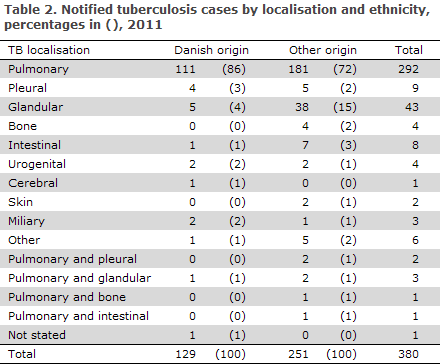 A total of 29 (8%) patients were notified with recurrent TB, including 12 Greenlanders, four Danes, two Somalis, two Filipinoes, and one from each of the following: Bosnia-Herzegovina, Cameroun, Nepal, Pakistan, Russia, Serbia-Montenegro and Vietnam. In two cases, the country of origin was unknown.

Alcohol abuse and/or homelessness were noted for 40 patients (11%) of whom 20 were Danes and 20 immigrants.

Information on concurrent HIV infection and therefore AIDS was provided in ten (2.6%) cases, two Danish and eight immigrant cases. Through active collection of data on HIV testing, EPI-NEWS 51/09, another four patients were identified; one Dane and three immigrants.

Country of infection and ethnicity

Ten Danes were presumably infected in the remaining parts of Europe (5), Asia (4) or Africa (1). In the remaining 18 Danes, the mode of infection was unknown. A total of 158 (63%) immigrants were presumably infected in their countries of origin, including 30 Greenlanders, 13 Somalis, 11 Indians, nine Afghans, seven Pakistanis, nine Filipinos, seven Vietnamese, six Bosnians and five Romanians. For a total of 18 immigrants the country of infection was unknown.

In 12 (18%) cases, homelessness and/or abuse were noted. A total of 30 were notified from the City of Copenhagen, 15 from East Jutland, seven from South Jutland, four from West Jutland, three from North Jutland and one to two cases from each of the remaining areas. In one case, information about part of country was missing.

A total of 16 cases of TB in children below the age of 15 years were notified, including five below the age of five years. Six of the children were Danes; all had been infected in Denmark. Among the ten immigrant children, two were presumably infected in Denmark and the remaining eight in their parents' countries of origin. A total of three children were probably infected by a member of their household, who had had TB within the past three years. In one Danish child, the disease was a relapse of previously treated TB, which was notified in the summer of 2008 and for which treatment concluded in 2009.

A total of 11 (69%) children, including five Danes and six immigrants, had pulmonary TB. A single Danish child had cerebral TB, and four immigrant children had bone, pulmonary, intestinal and ocular TB, respectively.

A Dane with infectious pulmonary TB was notified as having been infected while working as a waiter. MIRU typing identified five others in the same chain of infection (cluster), including one from the same place of work. The case was therefore, possibly, occupational infection.

One patient with infectious pulmonary TB, who was born in Denmark but of Asian origin, had previously worked at a reception centre. Another three patients were identified in the same cluster, including one theoretically possible source of infection, but no known contact was established.

One Dane with infectious pulmonary TB had possibly had occupational contact to the same reception centre. MIRU typing showed cluster 2, which makes it probable that infection occurred in Denmark, but any occupational infection could not be substantiated additionally.

A patient of Asian origin with pulmonary TB was notified as having been infected by a colleague in the Asian country of origin. This case was detected as a result of contact tracing. MIRU typing in Denmark identified an Asian bacterial strain, but could not contribute further to establishing occupational infection.

One patient of African origin with infectious pulmonary TB was reportedly infected while working as health personnel during a prolonged stay in an East European country. The patient had also stayed in Africa shortly before disease onset. Genotyping was not technically possible, and consequently occupational infection could not be substantiated.

A Dane with infectious pulmonary TB had previously travelled in the Far East and been employed for extensive periods at vessels with close contact to Filipino sailors, among others. MIRU typing identified one more Danish patient with glandular TB notified from the same area in Denmark. Occupational infection could not be substantiated.

One Dane with infectious pulmonary TB had worked at a ship with colleagues from many different parts of the world. MIRY typing detected cluster 2, making infection in Denmark probable. Occupational infection could not be substantiated.

One Dane had a positive interferon-gamma test, which does not allow for discrimination between latent infection and active TB. According to the information provided, the patient was treated for active TB. No other samples had been submitted for additional TB testing. This patient had occupational contact to a person abroad, who was diagnosed with infectious pulmonary TB.

In summary, no direct typing-verified cases of occupational infection were observed in Denmark, but based on epidemiological information and/or typing findings 2-3 possible cases were seen.

After a number of years with a decrease in the annual number of notified TB cases, EPI-NEWS 50/11 (Figure 1), the incidence has been rising since 2009, Figure 1. 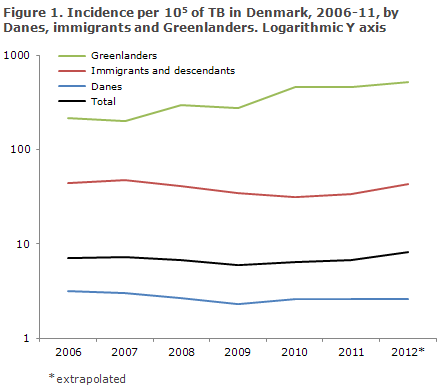 Greenlanders are the population group in Denmark with the highest TB risk. The number of notified TB cases in Greenlanders has increased by 140% since 2006. It is thought-provoking that the incidence among Greenlanders in Denmark is approx. 463/100,000, which is equivalent to the incidence in Denmark towards the end of the 19th century when TB was one of the primary causes of death.

Extrapolation of the preliminary number of TB cases recorded in 2012 indicates that the increase may continue through 2012 to reach an overall incidence of 8.2 per 100,000. The missing decrease in the number of TB cases among ethnic Danes - e.g. as opposed to the decrease observed in the ethnic population of Sweden or Norway, among others - shows that active spread of the infection does occur and this indicates inadequate TB control which threatens the long-term objective of elimination of TB in Denmark by 2050.

The Danish Health and Medicines Authority now recommends HIV testing of all TB patients, EPI-NEWS 46/09. It is encouraging that the share of TB patients who are tested for HIV has increased from 43% in 2007 to a minimum of 72% in 2010-11, based on the 90% of the notified cases in which this information has now been collected separately.