2011 saw a total of 195 notified cases of bacterial meningitis. Figure 1 and Table 1 show the distribution by aetiology and age. Meningococcal meningitis (67 cases) in 2011 is described in EPI-NEWS 38/12.

A total of 82 cases of Streptococcus pneumonia were notified . Among these, 76 were diagnosed by culture, three by PCR and three by microscopy. For 14 patients, information on underlying conditions or dispositions was available: Two were alcohol abusers, two had undergone neurosurgery, two had a dural defect, four had cancer, one was an IV drug user, one had azathioprine-treated Crohn's disease, one had previously undergone a splenectomy and, finally, one had previously had meningitis of unknown aetiology twice.

In 27 cases information on possible infection foci was available: 22 had an otogenic focus and/or sinusitis or other infection of the upper respiratory system and five had pneumonia. Information on sequelae was provided in 60 cases: 13 died and five suffered severe neurological sequelae, including one case of bilateral deafness. Six had cognitive sequelae such as difficulty with concentration or memory, including one with unilateral palsy of the oculomotor nerve. Twelve suffered hearing impairment (including five unilateral cases) and four also had other neurological sequelae. A total of 24 had no sequelae.

Two cases were seen in children aged two and four months, respectively, with unknown route of infection. Four children had no sequelae, two suffered hearing impairment, and in one case information on sequelae was unavailable. One fatal case was observed in a 58-year-old patient; there was no information available on underlying conditions or dispositions.

Five cases were caused by group A streptococci: A seven-year-old child with a cochlear implant who suffered no sequelae, and four adults including three for whom information on sequelae had been provided: One died, one suffered no sequelae and one had unilateral hearing impairment. Following a cerebral abscess, S. anginosus meningitis was detected in a 63-year-old patient who suffered cognitive sequelae. 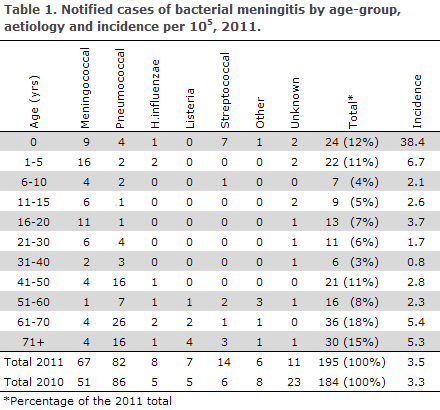 A total of seven cases of meningitis caused by L. monocytogenes were notified, all in patients above 50 years of age. Two were infected in Italy and five in Denmark. Two were immunosuppressed patients with leukaemia, no sequelae; and two had chronic alcohol abuse, no information on sequelae. For one 77-year-old patient, there were no disposing factors or sequelae, while information on dispositions and sequelae was missing for the last two.

In a total of eleven cases, patients were notified on the basis of clinical tests and investigations and/or cerebrospinal fluid cell counts consistent with bacterial meningitis, but without detection of bacteria by microscopy and culture. All survived and no sequelae were reported.

The number of cases of purulent meningitis was roughly in line with that observed in the previous years; 195 cases in 2011 as opposed to 184 in 2010. The slight increase is primarily attributable to an increase in meningococcal meningitis from 51 in 2010 to 67 in 2011. At present, we estimate that this trend has not continued into 2012 (EPI-NYT 38/12). The number of purulent meningitis cases of unknown aetiology decreased from 23 to 11. Meningitis due to other streptococci increased from six in 2010 to 14 in 2011, which is in line with the level observed in 2007 (EPI-NEWS 45/08).